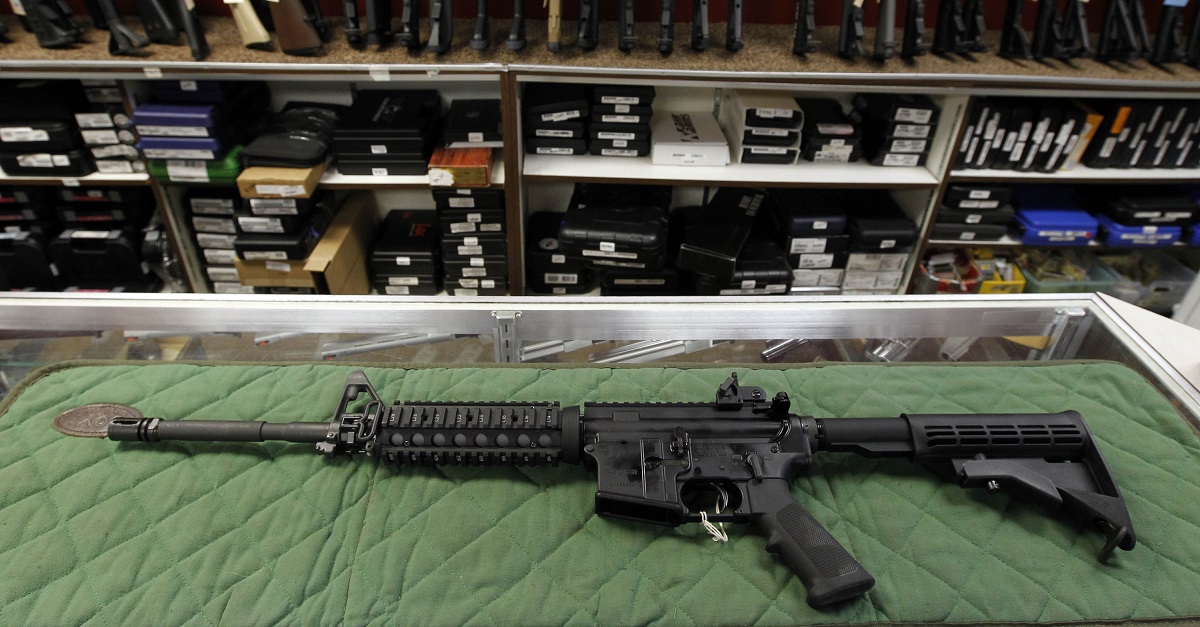 AP Photo/Alex Brandon, File
FILE - In this Thursday, July 26, 2012 file photo, an AR-15 style rifle is displayed at the Firing-Line indoor range and gun shop, in Aurora, Colo. Similar weapons have been used in at least four high-profile shootings in the past year, including most recently the Connecticut school shootings and the Christmas Eve killings of two New York firefighters. (AP Photo/Alex Brandon, File)

This weekend, the Sportsman’s Show organized by the Pioneer Valley Sportsman’s Association (PVSA) will return to the DuPage County Fairgrounds. But there will be one notable item missing at the show.

AR-15s are essentially banned from the show. There was originally going to be a raffle for fair-goers to win one, but that has been cancelled.

RELATED: Thousands gathered in downtown Chicago on Sunday to call for gun legislation in wake of recent mass shooting

Additionally, vendors are prevented from selling AR-15s, bump stocks, or any other devices that can change a semi-automatic rifle into an automatic shooter, writes the Naperville Sun.

Jim McGuire is the manager of the fairgrounds, and he says he has been talking with the PVSA since the Las Vegas shooting last October.

The show is one of the largest of its kind in Illinois and has been on the DuPage Fairgrounds for forty years. The show is generally pretty strict on its rules. “It’s all about safety,” said McGuire.

McGuire also noted that the show doesn’t adhere to some of the stereotypes these gun shows often have, as this show requires background checks and waiting periods.

“People hear about gun shows in the South where people walk away with guns the same day,” McGuire said. “That doesn’t happen in Illinois.”

The PVSA released a statement on their website about gun safety and following the law:

“The members of the PVSA Sportsman’s Association strongly condemn the actions of anyone that hurts or injures law abiding citizens where ever it may occur by whatever means they use.   Our thoughts and prayers go out to the families affected by the recent tragedies.

Our Sportsman’s show provides a venue for vendors to sell sporting goods of all types.  Our show participants have access to a wide variety of goods for fishing, hunting, camping and may more outdoor activities.

The recent tragedies perpetrated by a few unstable individuals should not reflect negatively or detract from the rights of millions of law abiding citizens.  We support common sense gun laws that keep those that may harm someone from owning or accessing a firearm.

We are deeply saddened by the recent events and it’s our sincere hope that the public remains vigilant and reports any activities that may help prevent these tragedies in the future.”

Still, this hasn’t stopped people like Jax West who leads the groups Friends Who March that plan to protest outside the fairgrounds to call for stricter gun laws.

“Everyone is determined to make this (Florida shooting) the last one,” West said. “The NRA (National Rifle Association) is going to have a booth there. The NRA is the real enemy.”