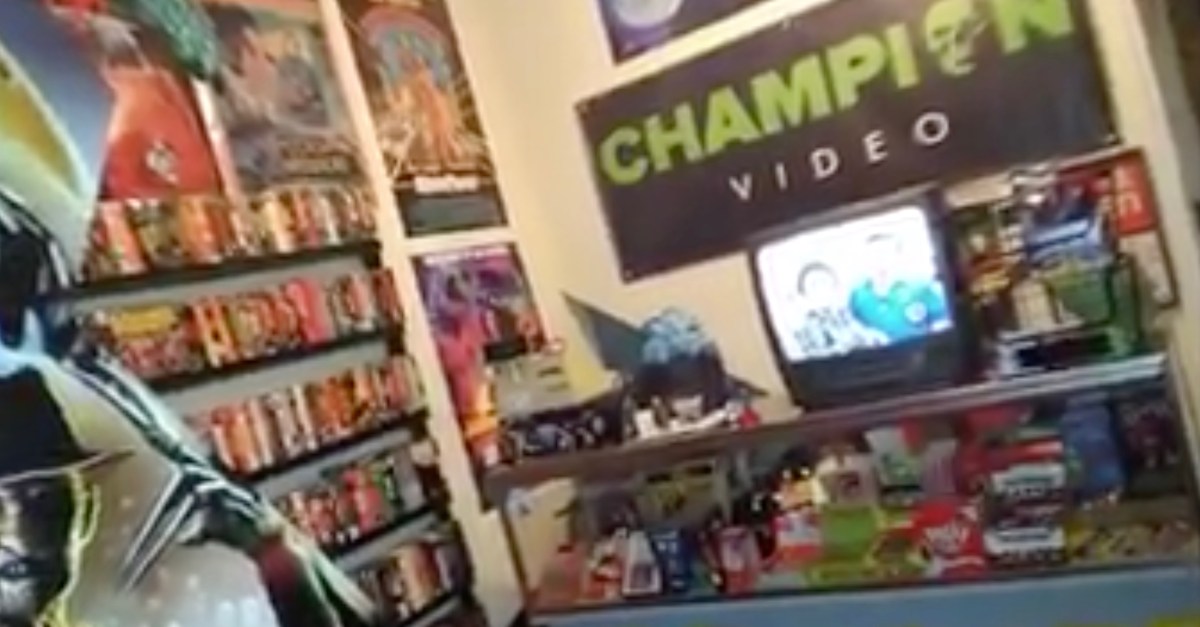 There is a certain science to functional hoarding.

And with a ‘functional video store in his basement’ straight out of the ’80s, one Houstonian seems to have mastered the art.

RELATED: Doing some spring cleaning? Throw away these items first

Artfully described on Dangerous Minds’ website as an “experience,” browsing a video store “gave us the thrill of the hung, and made the reward of that particular two-day-rental that much sweeter.”

Jason Champion said he captured that feeling with unparalleled detail.

Open since May 15, Champion Video is a fully-operational video rental store, complete with memberships tracked on a Commodore 64 computer in a pre-Office spreadsheet program and more than 4,500 movie selections.

Champion remembers his taped roots, but a Lunchmeat article raises the argument that the video store format “isn’t quite dead yet:”

“The classic chain of Family Video is still alive and finding ways to thrive out in the mid-west, Scarecrow Video has become a marvelous mecca of movies, indie start-up Old Skool Video is defying the odds in Nebraska and a hardy army of video stores like Viva Video in Ardmore, PA, Visart Video in Charlotte, NC, and many others are keeping the dream of overflowing aisles of movies and human-to-human cinema recommendation alive.”

As of April, Netflix boasted nearly 100 million members, and there are some 32 million viewers watching Hulu, two of the world’s largest digital viewing platforms.

In an interview, Champion said there are many reasons to preserve the video rental culture:

“There are lots of reasons to preserve this culture. I like to compare it to record collecting, man. Sure there are higher quality forms of media out there to watch movies on or listen to music to, but VHS and records were such a huge and nostalgic part of our lives growing up. It sucks seeing people just throw it away or forget about it like it never existed. On a positive note, though, the more I talk to people about the days of VHS and renting movies, I am reassured that it hasn’t been forgotten completely. When I talk to people about the glory days, it’s like you can see this light bulb go off and they come to the realization that, wow, this really was a huge part of growing up, and I miss it, too! It’s like something people have forgotten that they loved so much and just need a little nudge if that makes sense. So when people come check out Champion Video, I can see them being transported in a time machine back to the days of VHS rentals, and that’s very important and special to me to see them react that way.”

Some VHS collectors’ items can score up to $10,000 at auction, but Houstonians don’t have many options when it comes to video stores or a Video Home System set up.

Champion is the only video store in town, and manufacturers largely tapered off production of VHS players starting during 2008.

Full vhs collection so far, finally got it all organized in one place. #vhs #vhscollection

Logistics aside, Champion’s store is a product of five years of collection and has something for everyone:

“There is a display case with candy, trading cards, VCRs, blank tapes, tape rewinders, and popcorn for people to “buy.”  Also, I have a horror themed arcade set on free play, since a lot of old video stores used to have them. Oh man, there’s so much more stuff like video store promos, posters, horror and 80s collectibles all over the place, it’s like the 80s threw up everywhere.”

RELATED: The legacy of Yao Ming (and Houston!) will live forever in a quintessential 2000s ESPN commercial

Follow Champion on his Instagram, where you can learn more about events, like free screenings and meet-and-greets with other nostalgia lovers in Houston, and plan your next visit to Champion Video here.