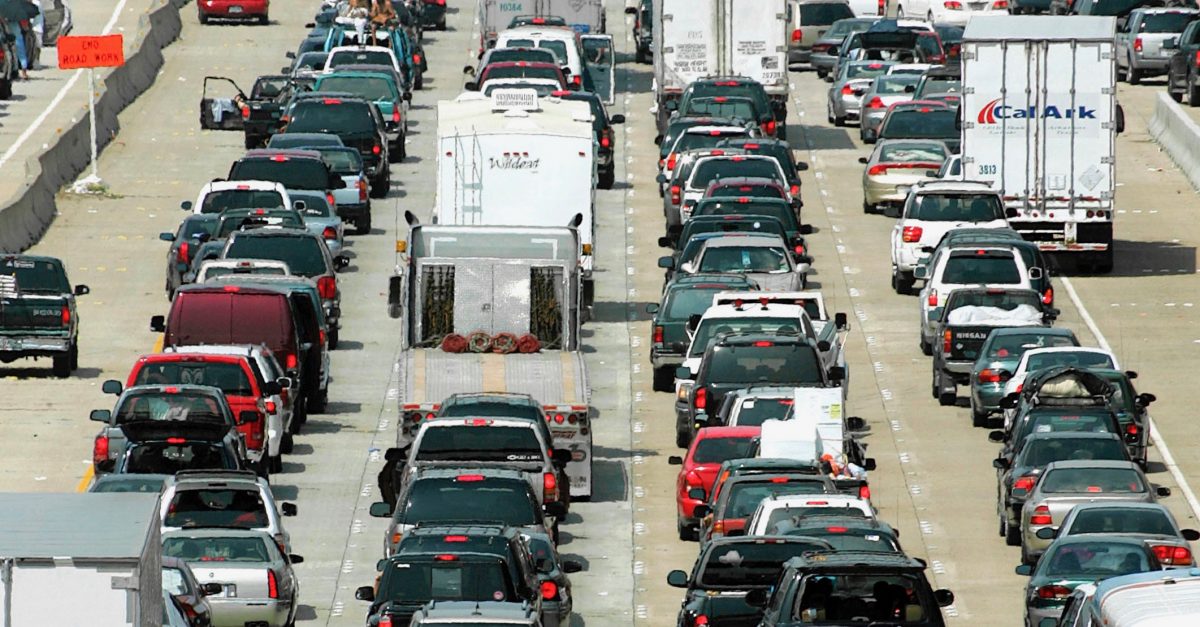 AP Photo/Paul Sancya, File
** ADVANCE FOR WEEKEND, MAY 27-28, FILE** As Huricane Rita approached on Sept. 22, 2005, a pedestrian with a tool box walks between stalled traffic on northbound Interstate 45 in Houston. Large metropolitan areas cannot clear out quickly without problems, so emergency leaders in Texas and Louisiana are trying to rewrite their evacuation plans . (AP Photo/Paul Sancya, File)

A video clip surfaced on Reddit this morning proving once again, some H-town drivers are indisputably insane.

The footage appears to show a person engaging with another dirver, illegally passing them on the shoulder and losing control of their own vehicle after attempting to brake-check the “offending” driver.

Luckily, someone got it all on their dash-cam.

RELATED: Rush hour can bring out the crazy in us all, but this Houstonian really put himself out there

After spinning out, the rogue SUV collides with the truck recording the footage, then spins back onto the shoulder.

It appears the accident did not hurt anyone involved, and the person driving the truck seemed to keep their cool.

According to one commenter, the driver spinning out tried to blame the person he hit for the accident, but the dash cam footage didn’t lie.

Of course, locals are familiar with the city’s infamous traffic.

In fact, it’s a bit of a running joke in Houston:

During traffic hour the crazy ass Houston drivers come out I can’t !!!!

Houston drivers are CRAZY MAN! I’m already going 80 in a 65 and people are passing me giving me dirty looks #rude

But really. Houston has some crazy drivers. https://t.co/QqPl6pRD2t

Not even the recent hard freeze could keep people from taking to the roads, in any direction:

Whoa! This is the Southwest Freeway at Chimney Rock. Look at all the people driving BACKWARDS to avoid the backup from icy roads!!! #houstonice pic.twitter.com/LWnUGw8pKZ

Some might say it’s a miracle there are no reports of injuries from this incident, either.

Let’s keep the potential vehicular manslaughter to a minimum by slowing down, H-Town.

RELATED: Watch a motorcycle tied to a truck drive down US 59 in Houston