It was less than a week ago that Justin Bieber let the world know he was battling Ramsay Hunt and that his face may have permanent paralysis. He is now letting his fans know that he is frustrated but fine.

The 28-year-old megastar posted to his social media the update.

He posted: “Each day has gotten better and through all of the discomfort I have found comfort in the one who designed me and knows me. I’m reminded he knows all of me. He knows the darkest parts of me that I want no one to know about and he constantly welcomes me into his loving arms.

“This perspective has given me peace during this horrific storm that I’m facing. I know this storm will pass but in the meantime Jesus is with me.”

Ramsay Hunt Syndrome is a syndrome which occurs when a shingles outbreak affects a facial nerve near one of the ears. It can cause not only a painful rash but potential facial paralysis and hearing loss.

The latter of those symptoms is what Bieber said that he was experiencing.

“As you can probably see from my face, I have this syndrome called Ramsay Hunt Syndrome,” Bieber said on Friday.

He then showed fans all of his physical symptoms: He cannot blink, smile, or move his nostrils on the right side of his face — and closed the video out with a lopsided grin.

Bieber added that he was sorry to all of his frustrated fans that are missing his performances.

“So for those who are frustrated by my cancellations of the next shows, I’m just physically, obviously not capable of doing them,” he said. “This is pretty serious, as you can see. I wish this wasn’t the case, but obviously, this is my body telling me to slow down. I hope you guys understand. I’ll be using this time to just rest and relax and get back to 100 percent so I can do what I was born to do. But in the meantime, this ain’t it. I gotta get my rest on.” He concluded his message, “I love you guys. Thanks for being patient with me. And I’m going to get better. I’m doing all these facial exercises to get my face back to normal. …And it’s going to be OK.” 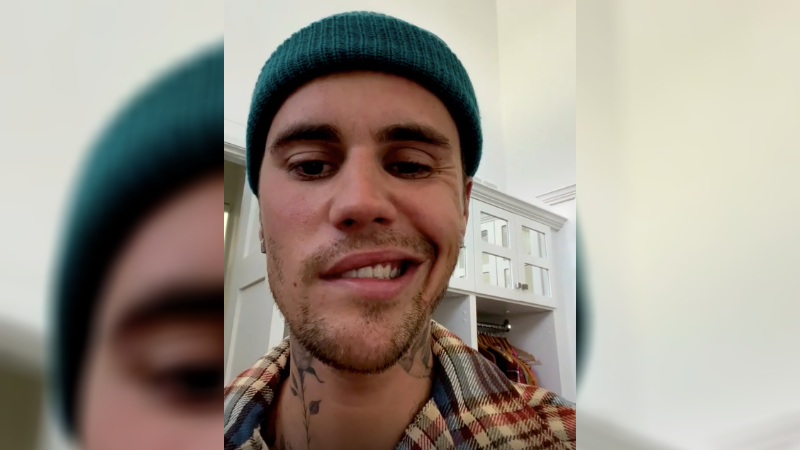