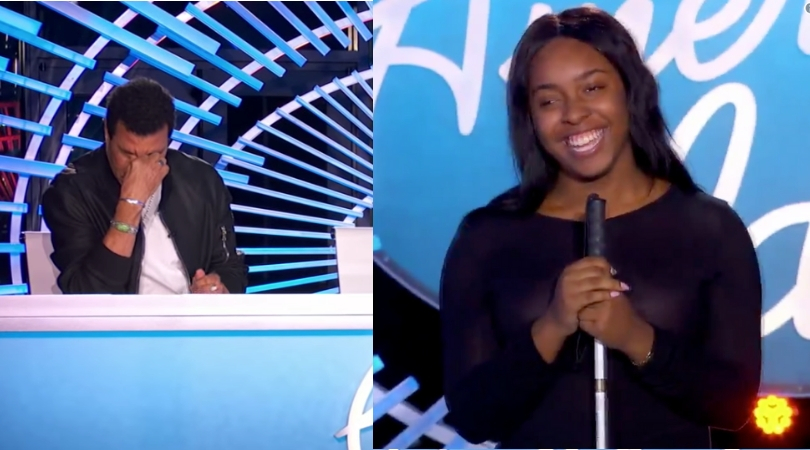 Alright, grab your tissues, lock yourself in a room by yourself, and accept your fate, because you are going to cry your eyes out during this specific episode of American Idol! American Idol contestant, Shayla Winn brought musical icon and American Idol Judge, Lionel Richie, to tears with her performance during this American Idol audition.

Shayla, known as contestant Shayy, battled brain tumor in 2018. After months of thinking she needed glasses, she went to an optometrist who told her she needed to go to the ER. Medical professionals then ran some tests, including an MRI, where it showed Winn had a brain tumor that caused extra liquid to gather in her brain.

Since then, Winn lost her vision due to having hydrocephalus and has been legally blind for a little over the year. Although the blind singer admits that it was a hard transition, she fought every day to overcome her struggles. The 17-year-old quickly went in and dove into a powerful and emotional cover of Andra Day’s “Rise Up”, which immediately brought the judges to tears.

After her performance, Lionel quickly stood up in the emotional moment to hug her while crying calling her a lesson and a reminder of how “blessed we are”.

Still in awe of you #ShayyWinn. You have touched my heart.♥️ Thank you for sharing your spirit with us. I’ll never forget it. #AmericanIdol pic.twitter.com/HJirc5cjTd

Of course, as expected, judges Katy Perry and Luke Bryan along with Richie quickly made the unanimous decision to send Shavy to the Hollywood round. Which I mean, after watching that, one can easily see why. It’s inspiring, it’s sad, but in a good way.

This girl is inspiring us all and telling us that despite her having the rug tugged out from under her, she is still trying to make her dreams come true. I’m in awe. Much like everyone on social media who saw the video and immediately began to root for Winn.

Well @AmericanIdol probably had no bigger cynic to overcome than me— not only did I hate what the show became in later seasons on Fox, I was cranky it replaced @TheGoldbergsABC et al tonight. But I just watched a girl named Shayy sing “Rise Up” and I am sobbing and I am hooked.

I’m crying and have the chills mannnn. LIKE THE CHILLS from this Shayy girl. The story, the song. Wow.. Great pitch.. #AmericanIdol

Editor’s note: This article was originally published on March 7, 2019.