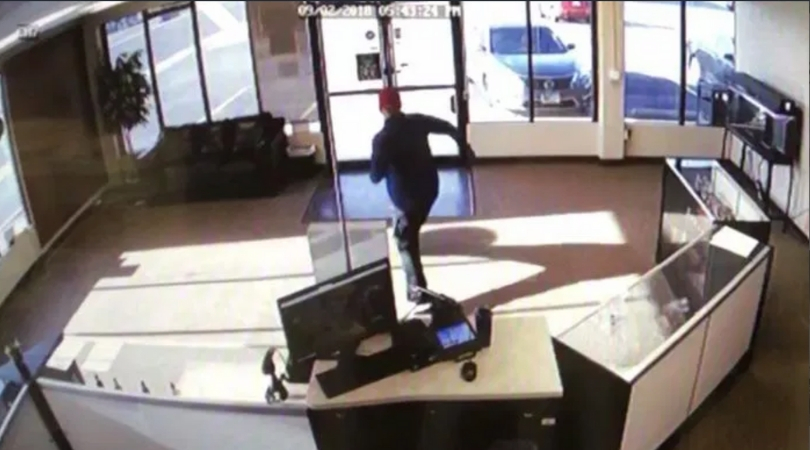 You know how sometimes there are those clumsy people who just seem to get everything wrong? Either they fall, they spill something, or just fail at doing what they wanted to do. Well, that is exactly what happened in Aurora, Colorado, after an attempted robbery was reported at an E-Cigarette store in Denver.

According to authorities, and hilarious security footage, police are investigating the attempted robbery, after a suspect was seen walking up to the counter and pulling out what appears to be a gun. The suspect is then seen fumbling around, losing grip of the weapon, which falls on the other side of the counter. He then attempts to hop the counter to get it, and ultimately fails, realizing well, he messed up. The initially horrified woman, realizing the gun is now on her side, did what any person would do to save their life, and grabbed the gun. The suspect panics as he sees the woman with the gun in her hand, and immediately runs, no not runs, sprints, to the door, kicking the door open! Poor guy’s pants even started to fall down and everything.

I’m sorry, but that is just too good! Someone should give this guy a ‘you tired’ medal or a ‘world’s funniest video’ title or something. I’m sure he is seriously beating himself up for this, to be honest, I kind of feel sorry for him a little bit. Can you imagine the shame he must have felt while driving on his way home? Poor guy never had a chance. Sorry dude, make sure you plan out your next heist a little bit better…or maybe just wear those slip-proof gloves, ya know?

While the suspect was wearing gloves, the store’s owner hopes the evidence left behind helps police. There were no fingerprints inside the store, but they are testing the firearm, which was later identified as an Airsoft, or BB gun, to see if they are any present on the clip. If you have any information about this fumbling suspect you are asked to call Metro Denver Crime Stoppers at 720-913-7867.