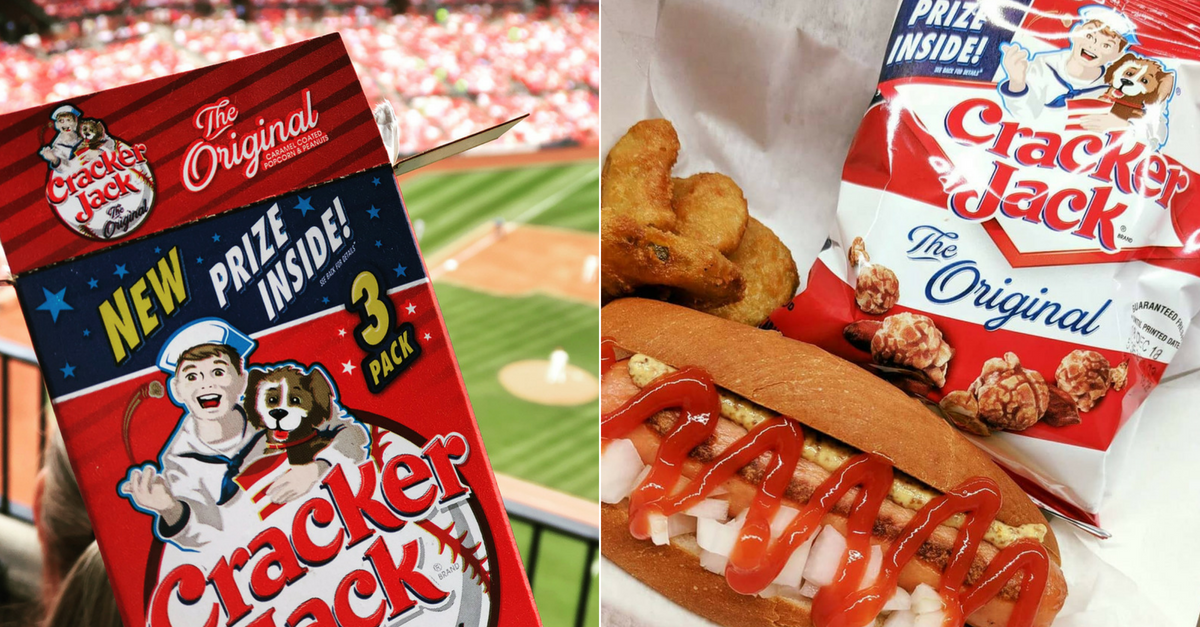 How much do you know about America’s favorite candied popcorn? Cracker Jack isn’t just a staple at baseball games and the country’s number one giver of inane prizes that children covet and then almost immediately abandon — it actually has a long, weird, and interesting history. Who knew popcorn could be so complicated?

1. Cracker Jack was named by accident.

Anyone who has ever spent time working in marketing or advertising knows how hard naming something can be. Everything sounds dumb at first. You start to talk yourself into objectively mediocre name ideas just to bring the meeting to an end and, ultimately, the best idea tends to be one that was stumbled upon.

That last part was true for Cracker Jack. The caramel-coated popcorn got its name when, in 1896, a random sampler of the tasty snack, said, “That’s a crackerjack!” Back then, that was slang for saying a thing was good. So, essentially, it’d be like if someone today named their snack food, “Dope.”

2. Cracker Jack is an American favorite, so, naturally, it was invented by immigrants.

The inventor of Cracker Jack, Frederick William Rueckheim, was a German immigrant who started out selling popcorn on the streets of Chicago. Eventually, he brought over his brother Louis Rueckheim from Germany to join him in his business venture. It was Louis who figured out a way to separate the kernels of molasses-covered popcorn. Before that, large chunks of the sticky treat would stick together, making it hard to handle and package.

3. They got maybe the best free advertising of all time.

Cracker Jack had absolutely nothing to do with being mentioned in the song “Take Me Out To The Ballgame,” written in 1908 by Jack Norworth. By total coincidence, the candied popcorn became the most famous line in one of the most famous and repeatedly sung songs in American history. It’d be like if, “Happy Birthday” featured a verse about Coca-Cola.

But, 110 years later, the song and the candy live on, as popular as ever.

4. Major League Baseball fans get angry when they can’t buy Cracker Jack at a baseball game.

Just ask the New York Yankees. Back in 2004 the Yankees started selling Cracker Jack knockoff Crunch ‘n Munch at the old Yankee Stadium instead of our beloved American staple. The fans were pissed. Like, getting raisins on Halloween pissed. There was so much outcry that the Yankees switched back to Cracker Jack.

5. There is a really sad story about the mascot on the Cracker Jack Box.

First used in 1916, Sailor Jack and his dog, Bingo, are based on real-life family members (human and canine, respectively) of the Rueckheim family. Sailor Jack was based on Robert, the son of the third and eldest Rueckheim brother, Edward. The dog was based on a real-life pup named Russell, who was a stray adopted by then co-owner Henry Eckstein. Sadly, Robert died of pneumonia at the age of 8, shortly after he appeared on the package.

The sailor mascot, and who it was based on, meant so much to Frederick Rueckheim that he had it carved into his tombstone.

On a happier note, Russell the dog lived a long, happy dog life until he passed away peacefully in 1930.

Didn’t even know they still made these. #crackerjacks #jacksforcrackers #yum #tasty #superhealthy #sike

File this under, “Grrr kids today and their phones.” But hey, you’ve got to keep up with the times, huh? For most of its existence Cracker Jack was famous for including a prize inside every box — usually baseball cards, decoder rings, temporary tattoos, etc. (Those toys were made in Japan up until 1937, when the onset of World War II started making things, um, awkward, we’ll say.)

Nowadays, however, all Cracker Jack prizes are claimed digitally, because that’s where kids get their entertainment.

Until 1964 Cracker Jack was run by its founding family, the Rueckheims. That year, however, it was sold to Borden, who outbid Frito-Lay to win the Cracker Jack brand. Frito-Lay still had its eyes on the popcorn snack, though, and came calling again, this time in the form of its parent company, Pepsi. In 1997 PepsiCo bought Cracker Jack and quickly folded it into the Frito-Lay family.