Have You Ever Visited Pal’s Sudden Service For a Frenchie Fry? 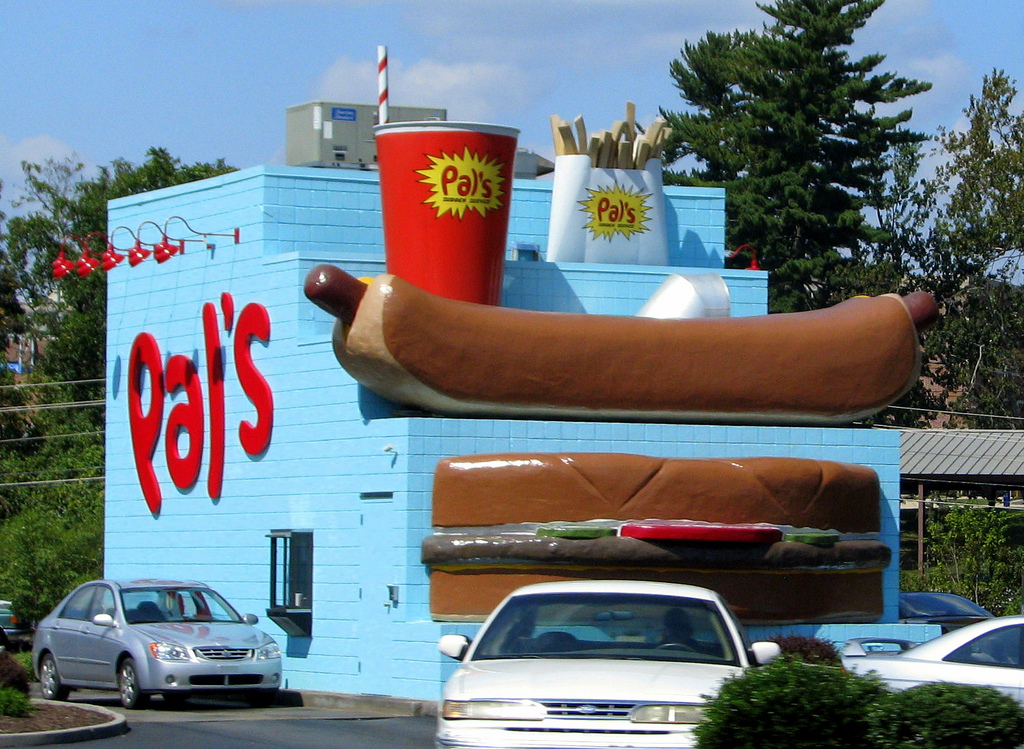 Once you cross the Tennessee border there is one fast-food restaurant on everyone’s minds: Pal’s. Rising from the depths, a comically-large meal of a burger, hot dog, french fries and soda reach for the sky, beckoning guests to drive thru and grab a Big Pal or chili burger. There’s no door to go inside and there’s no microphone to yell your order. Buckle up and get your order ready, you’ve reached the retro-fabulousness that is known as Pal’s Sudden Service.

My boyfriend and I had just finished up biking the Virginia Creeper Trail (17 miles!) when he exclaimed that we had to make a stop in Johnson City, Tennessee before making our way back home. The minute we rounded the corner and the robin’s egg blue building appeared I knew I was in for a special treat.

Founded in 1956 by Fred “Pal” Barger, Pal’s Sudden Service opened their first store in Kingsport, Tennessee about a year after Fred met Ray Kroc, the founder of McDonald’s, at the National Restaurant Convention in Chicago, Illinois. Observing the construction and equipment Ray used at his first McDonald’s location, Fred was inspired to create his own fast food restaurant that excelled in flavor and organization.

The fast-food joint, which operates mainly in the Tri-Cities, Tennessee region is regarded as one of the best run burger chains in the country. Pal’s has even managed to win the Malcolm Baldrige National Quality Award back in 2001. The award is the only formal recognition of the performance excellence of both private and public U.S. organizations awarded by the President of the United States. Pal’s is currently the only restaurant to ever win this award.

When in the TriCities… you simply must. 🍔🍟 @eatpals #burger #seasoned #fries #tennessee #drivethru

One visit and you’ll instantly realize why this fast-food chain is award-winning. Their employees pride themselves on being cheerful and efficient, making Pal’s an organization commonly used for case studies. The employees undergo training which includes pop quizzes and over 200 hours of training. Notably, this significantly lowers the turnover rate, making it one of the lowest in the industry.

We pulled up to the window and decided on ordering a Big Pal (which is a 1/3 lb. beef patty), a Junior Burger, a large Frenchie Fries, and a vanilla milkshake. The menu itself is simple with burgers taking up the majority of the real estate. And unlike most American burger places, Pal’s tops its burgers with only mayonnaise, lettuce, tomato, and onion. Cheese is available for extra. Some notable menu items include a Chipped Ham Sandwich, the Bar-B-Dog served with pulled pork and the Sauceburger which is doused in Pal’s famous sauce.

Pal’s also boasts a down-home breakfast menu which includes gravy biscuits, country ham biscuits, and cheddar rounds. And don’t get me started on the drink menu. Mello Yello and Mr. Pibb are available in the soda fountain as well as Dr. Enuf, an Eastern Tennessee lemon-lime soda.

We made our way around the building to the next window where we paid and were handed off our bag filled to the brim. I immediately took a bite of a Frenchie fry and felt myself fall in love. The fries, sprinkled with seasoning salt, are delicious without any ketchup. But when dipped in the vanilla milkshake…I thought I died and went to heaven. The burgers were perfectly cooked and the absence of ketchup was a welcome surprise. My only complaint would be that the closest location is ninety minutes away.