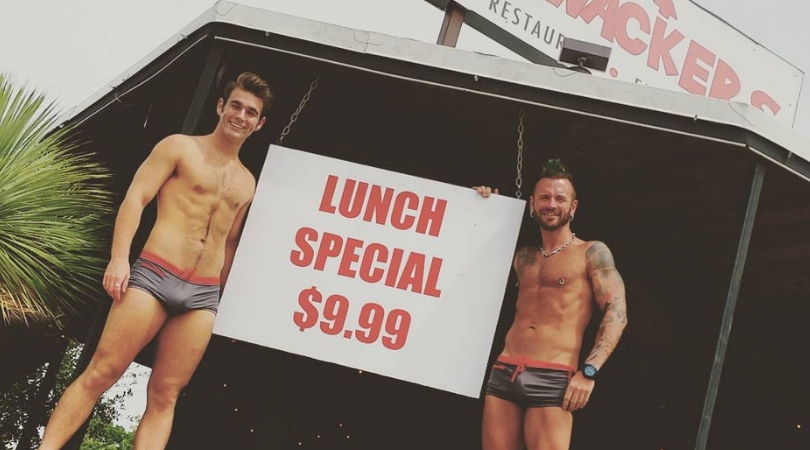 In recent years with films such as Magic Mike and Channing Tatum’s Saints and Sinners club on Bourbon Street, Louisiana, the concept of male celebration has become more commonplace. There was even a male version of Hooters and Twin Peaks back in 2015 [currently closed, but working to reopen]. All behold, the much-deserved counterpart to the overplayed “breastaurant”- the chestaurant.

A post shared by Tallywackers Restaurant (@tallywackersofficial) on Jul 13, 2016 at 8:01am PDT

Tallywackers, named after the 18th-century British slang word for ‘penis,” was a restaurant where a shirtless all-male staff wearing tight red and grey underwear served food. And yes, you could sort of see their, uhm, tallywackers. The restaurant opened in 2015 in the self-proclaimed “gayborhood” of Oak Lawn in Dallas, Texas. Predominantly marketed towards gay men in the community in Dallas, the restaurant also had plenty of women patrons.

Tallywackers leaned pretty hard into their business model with a suggestive menu and an ATM that gives you $1 bills. The menu had an S&M burger (swiss and mushroom), a large 1 pound Tallywacker hot dog, Mario’s meatloaf, “cocktails”…items of that nature. So, there were the men, shirtless and all and serving food and drinks that would make you want to never take your child to the restaurant. Because well, they would ask so many questions.

A post shared by Tallywackers Restaurant (@tallywackersofficial) on Jul 10, 2016 at 12:33pm PDT

While a great idea and very humorous,  the chestaurant closed after only one year. Apparently, people weren’t all too happy with buff waiters serving hot dogs and S&M burgers and made them feel uncomfortable. Which is totally understandable, but need I remind you that Hooters is exactly that, but with females?

Still, Owner Rodney Duke claimed the restaurant would relocate and re-open, however that has yet to happen. Still, I think this would definitely work for cities like Austin or Seatle since they are big cities and there is so much diversity. But, I guess we will have to wait and see.

And if you wanna know what it was like or prep for the environment for whenever the chestaurant does returns to us, check out this interview from MEL Magazine featuring one of its past employees. Regardless, thanks to the internet we can relive the chestaurant dream until it does come back.

Watch:Why The Tomato Mayo Sandwich is a Southern Staple