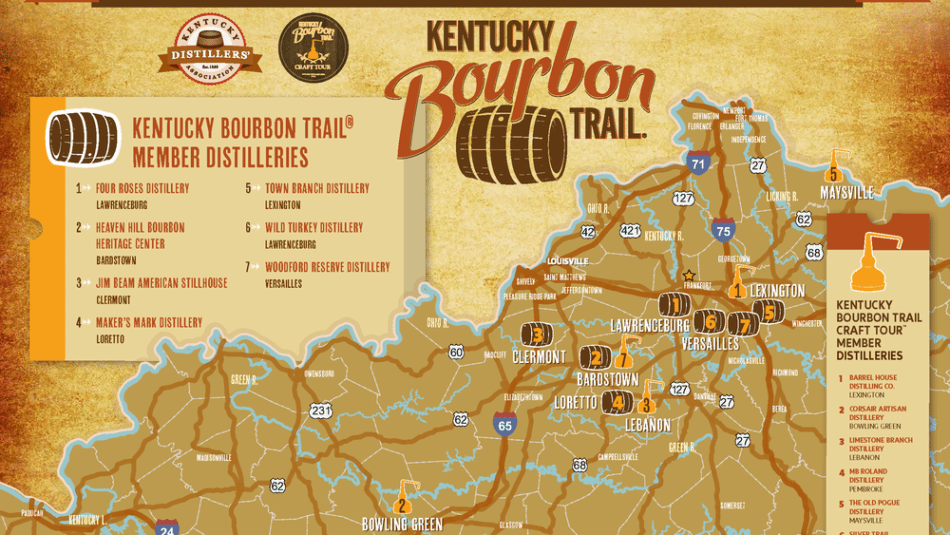 The Kentucky Bourbon Trail is a coveted distillery crawl in America that’s on the bucket list of every bourbon lover. With names like Jim Beam, Bulleit, Wild Turkey, and several others all located under 100 miles of each other, it’s hard to resist a pilgrimage to the Bluegrass State. Drawing in over 2 million visitors a year, the famous trail is not only rich in quality bourbon, but it’s also rich in American history. In 1999, the Kentucky Distillers’ Association formed the official Kentucky Bourbon Trail tour as a way to educate visitors about how bourbon is crafted and the deep history embedded in Kentucky’s bourbon country. And boy are we sure glad they did.

If you’re ready to get a taste of American history and a real bourbon experience, grab your KBT passport and hit the trail for a distillery tour that will make you appreciate bourbon in a whole new way. So grab your classic Kentucky Mint Julep, and let’s plan a dream getaway on the best bourbon heritage tour in the country starting in Bardstown, Kentucky, at the home of the Kentucky Bourbon Trail.

From Louisville to Lexington, here are all the stops you’ll want to make to get a taste of Kentucky’s finest bourbon.

First stop on the trail, Angel’s Envy. Angel’s Envy is craft distilling at its finest. Pumping out eight to twelve barrels at a time, their hand-blended batches are a result of a 200-year-old tradition. To add a layer of depth to their products, the bourbon is finished in a ruby port cask, and the rye in a rum barrel.

Be sure to get a taste of their Cask Strength Bourbon finished in port barrels when stopping by. The complex, unfiltered spirit was voted “Best Spirit in the World” by Spirit Journal. This is one trail distillery you won’t want to miss.

Evan Williams may have been a jack-of-all-trades, but there is one trade in particular he mastered, and that was bourbon. What he began in 1783 on the banks of Ohio is now the second largest selling Kentucky Straight Bourbon Whiskey in the United States, and the world. How about that for leaving a legacy for a native spirit?

When stopping by the location in Louisville on “Whiskey Row”, you have three tasting options. You can get a Traditional Tour and Tasting, have the Speakeasy Experience with a premium selection of bourbon, or try Sweet and Neat with a chocolate and whiskey pairing. With flavors ranging from their Kentucky Straight Bourbon to Egg Nog, there’s a little something for everyone at during the Evan Williams Bourbon Experience.

Only stop on the way to Nashville. Rarely a Jim Beam drinker but worth the quick detour off the hwy. Really interesting property. #jimbeam

Did you know that Jim Beam makes over two-thirds of all the bourbon produced in Kentucky? Considering all the phenomenal bourbon made on the trail, that ranks Jim Beam pretty high on the popularity scale. So what is it about Jim Beam that makes it so special? It’s the process. Jim Beam is distilled twice then aged for four years in virgin American oak barrels. The yeast strain they use is the very same yeast they have used since the end of Prohibition.

Speaking of Prohibition, that’s how this brand got its name. After Prohibition, the distillery was revived by James B. Beam, “The Colonel and the Legend.” They say he was so protective of his yeast strain, that he brought it home with him every weekend. How’s that for monitoring quality? Bourbon tours are never complete with a stop here to really appreciate a slice of American history.

Jim Beam does more than make bourbon, they also have a food line. From beef jerky to coffee beans, you can have all the things you love flavored like bourbon. If you can’t make it to the trail, or are having a hard time finishing it, you can shop online and bring the Kentucky Bourbon Trail to your home. Or if you’re in Tokyo, go to a pop-up Jim Beam bar.

The Bulleit Distilling Co. may have started in 1987, but the recipe has been around much longer than that. Augustus Bulleit began distilling a rye whiskey back in 1830. After many experimental batches, Augustus came up with a unique bourbon that he would distill for the next thirty years. Then, one fateful day in 1860, Augustus vanished. According to legend, he loaded up a truck full of barrels and headed to New Orleans. He was never seen again.

While we may not know what happened to Augustus, we do know what happened to his recipe. Thanks to his great-great-grandson Thomas E. Bulleit, Jr., the brand is alive and prosperous. In particularly, Bulleit Rye Whiskey. A a straight rye whiskey made from 95 percent rye and 5 percent malted barley, this rye was made for bartenders. Taking off in bars throughout California, the state has become its biggest market.

If you’re anywhere near Louisville, Kentucky, you must make this stillhouse stop on the trail. With a tour and tasting only costing you $10 a person, it’s hard to resist. What’s also hard to resist is a Bulleit Rye Manhattan. Just saying.

When it comes to bourbon, the name Heaven Hill’s should ring a bell. They are the seventh largest supplier of spirits in the United States, and the “largest independent, family-owned and operated producer and marketer of distilled spirits in the country.” How’s that for a bourbon presence?

Originally beginning as Old Heavenhill Springs in 1935, they changed their name to Heaven Hills Brands in 2004. Their portfolio includes the world’s second largest selling bourbon, good old Evan Williams. From whiskey to gin, they sell their brands in over 40 countries.

That’s a lot of barrels hitting the market. Speaking of barrels, do you ever wonder what happens to Heaven Hills bourbon soaked barrels when their finished? They go to the breweries. Thanks to Heaven Hills, beers like Ballast Point’s Victory at Sea and Oskar Blues’ Ten Fidy have spent time soaking up the flavors of bourbon, giving us barrel aged beers worthy of imbibing.

#makersmarkdistillery didn't take too many photos of this place as I was too interested in the process, at the end of the tour we got to taste test white, makers mark , 46 , cask strength and a privateselect , the white and cask strength can only be purchased if you go to the distillery, so you know what we did 🙂 #tour #holiday #bourbon #kentucky

Not all bourbon distillers can claim having relations to famous outlaws, but T.W Samuels can. The distiller who created T.W. Samuels & Sons Distillery, was the uncle of Frank and Jesse James. Supposedly, he was also a chauffeur for Colonel Sanders before he got into the bourbon business. Pretty crazy, huh?

T.W. Samuels & Sons Distillery was eventually sold, but thanks to Bill Samuel, Jr., the family legacy would live on. He reinvented the family recipe and Maker’s Mark was born. Since the first bottle sold – which cost $6.79 – in 1958, Maker’s Mark has been putting their iconic wax seal on every bottled produced. And the iconic “mark”? You’ve probably noticed the “mark” stamped on every bottle, but may not know the meaning. The star represents Star Hill Farms – the distillery’s location – whereas the “S” is for Samuels and the “IV” for T.W. Samuels as a fourth generation distiller. Today, all the bottles are still hand-dipped and contain the signature mark.

Stop on by the distillery and get a first hand look at the old traditions of bourbon making. And be sure to get a sip of the bold flavors of Maker’s 46 while you’re there.

Here's a sneak peek of our 2017 Limited Edition Small Batch. 🥃

Four Roses hand crafts 10 unique bourbons that are worthy of imbibing. The distillery which began in 1888 is the only distillery to use five proprietary yeast strains and two separate mashbills – one with 60 percent corn and the other with 75 percent corn. Using only quality ingredients, they opt for non-GMO grains. They are also the only distillery to use single-story barrel warehouses to age their barrels. With a temperature varying about 8 degrees Fahrenheit, the barrels age undisturbed, allowing for a better maturation process.

Four Roses has two stops along the Kentucky Bourbon Trail. One is their distillery, the other is their warehouse and bottling plant. No matter which location you decide to visit, you can try their hand crafted bourbon at each location.

Wild Turkey Bourbon – named after Kentucky’s Wild Turkey Hill – had its name solidified in 1940 thanks to distillery executive Thomas McCarthy sharing the bourbon on a hunting trip. You’ve got one guess as to what they were hunting. The bottle he shared was a 101 proof undiluted bourbon that his friends insisted he bring more of that “wild turkey” bourbon on the next hunting trips to come. Known for their flagship Wild Turkey 101 Bourbon, their profile contains everything from Wild Turkey Rye to the first bourbon liquor which was released in 1976.

Located at Wild Turkey Hill in Lawrenceburg, Kentucky, the red and green distillery is open for tours and waiting for you to come enjoy a taste of Wild Turkey’s finest.

Woodford Reserve has been around since 1812, making it one of the oldest, and smallest, distilleries in the country. Concerned about preserving their piece of history, they have taken motions to become a sustainable distillery by joining the Kentucky Chapter of the Nature Conservancy. The have planted 400 trees on the property, have added in nature trails, and work to prevent erosion around the creek they first began to use in distilling, Grassy Springs Creek.

Taking pride in a quality product, they are one of the only distilleries in the world to use heat cycled barrelhouses, making sure every delicious drop of their whiskey touches the fine oak barrels. And fine their whiskey most certainly is as they have won various awards for their products.

When visiting the distillery, don’t pass up on the award winning bourbon that has over 200 detectable flavorful notes that does this liquor proud.

IT'S CYBER MONDAY! Free shipping from our online store! store.kentuckyale.com Starts 12 AM 11/28 and ends 12 AM 11/29 #cybermonday

The newer guy on the block, Town Branch opened its doors in 2012. Located at Alltech Lexington Brewing & Distilling Co., they are pumping out bourbon as well as beer. Although the building may be new, the recipe is old. When founder Dr. Pearse Lyons resurrected the Lexington Brewing & Distillery, he brought back traditions that date back to 1794. The first new distillery to open in Lexington in the past 100 years, you can pop on in for a tour of this pristine facility and get a pint and a shot all in one spot.

Please plan you trip responsible. Head on over to the Kentucky Bourbon Trail website for information on shuttles, taxis, and biking options.

Editor’s note: This article was originally published on September 29, 2018.

Watch: The Differences Between Bourbon, Whiskey, Scotch, Rye, and Brandy