Paul Sorvino, best known for his roles in Goodfellas and on Law & Order, passed today at age 83. He’s also the father of Oscar-winning actress Mira Sorvino. And Paul was a protective dad.

Young Mira found fast fame during the mid-90s after a star-making turn in The Mighty Aphrodite. It was a role which took her face to face with industry kingpin and serial predator Harvey Weinstein. Weinstein would go on to blackball Mira, halting her career … and making an enemy of the elder Sorvino.

Born and raised in Brooklyn, Paul Sorvino made his acting debut in 1964 with the Broadway musical Bajour. He later appeared in The Panic in Needle Park, alongside Al Pacino, before breaking out with Goodfellas in 1990. Though Sorvino had always been a working actor, it was his portrayal of the memorable caporegime Paul Cicero that made Sorvino a recognizable name.

Reflecting later on his violent role in Goodfellas, Sorvino said it was challenging to find “that kernel of coldness and absolute hardness.” The New York Times story quotes the actor, “antithetical to my nature except when my family is threatened.”

And we know he wasn’t lying.

“When you give me this award you honor my father Paul Sorvino who taught me everything I know about acting. I love you very much, dad,” Mira said on stage, gushing, as the camera cuts to her father. Seated in the audience, he is proud to the point of tears. It’s an emotional moment to see, all these years later, especially in the wake of Paul’s passing.

The success of The Mighty Aphrodite was tinged with impending doom. The film producer – Miramax Pictures – was stained in controversy. Harvey Weinstein was the film distributor, and it was Weinstein who headed Mira’s successful Oscar campaign.

Mira Sorvino was one of the earliest, and most famous, Harvey Weinstein accusers. At the start of the MeToo Movement in 2017, she penned a guest column for the Hollywood Reporter in which she detailed Weinstein’s advances on her — and the subsequent backlash she face in her career.

As Mira describes it, she was was in her 20s when Weinstein first approached her sexually. They were at the Toronto Film Festival, promoting Mighty Aphrodite. At the time, she said, “You think, ‘I don’t want to offend him. I don’t want to anger him, I just need to get out of this situation as gracefully as I can.’ You’re thinking, ‘Oh my gosh, Harvey Weinstein is massaging my back, what do I do?’ …You don’t start thinking, ‘Oh, he’s a sexual predator’ … You just want to get out.” So that’s what Mira did. She attempted to remove herself from the situation. But she didn’t keep quiet.

Sorvino says she told everyone in her life at the time — including her father Paul and her then-boyfriend Quentin Tarantino. Like Sorvino, Tarantino found massive success through Miramax Pictures during the 1990s. And Sorvino believes the only reason Weinstein “stopped trying” with her was because of the star director.

Mira says she was blackballed for speaking out

However, Weinstein was still messing with Sorvino. Behind the scenes. Despite her Oscar win and hits like Romy and Michelle’s High School Reunion, the parts suddenly dried up. Mira is sure she was blackball. Speaking recently on an episode of WTF with Marc Maron, she offers an emotional account of the years that followed Weinstein’s harassment.

In one instance, Mira had booked a leading role in Peter Jackson’s first Lord of the Rings movie — a guaranteed blockbuster — when Jackson director was persuaded to fire her. Jackson has gone on the record stating that he was responding to a “smear campaign” aimed at both Mira and Ashley Judd, orchestrated by Weinstein. “I recall Miramax telling us they were a nightmare to work with and we should avoid them at all costs,” Jackson said.

Speaking to Maron about the experience, Sorvino’s voice wavers. She describes the years that the phone didn’t ring; the years that she was unsure of her future.

So where was Paul during all this?

At the time, Mira wrote in her op-ed, “My dad asked me, ‘Mira, did you tell me not to do anything about it because you were afraid that it would get me in trouble?’ I said, ‘Yes, I was afraid that you were going to get arrested for beating him up.’ “

And she’s not wrong.

“I’ll kill the motherf***er. Real Simple,” Paul said, in 2018, referring to Weinstein. And if Paul had realized Weinstein was in fact blacklisting Mira, he says, the disgraced producer would have been put “in a wheelchair.” He went on: “He oughta hope that he goes to jail, because if we come across [one another] he’ll be lying on the floor.”

It seems the actor embodied only one mafia trope in real life: Never go against the family. 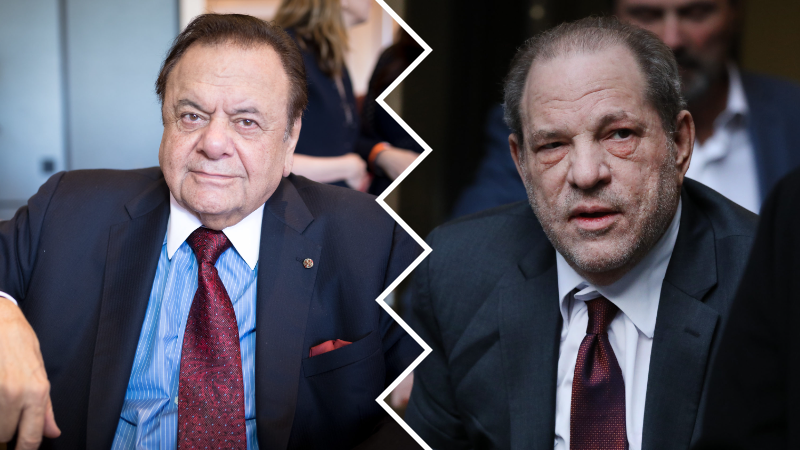