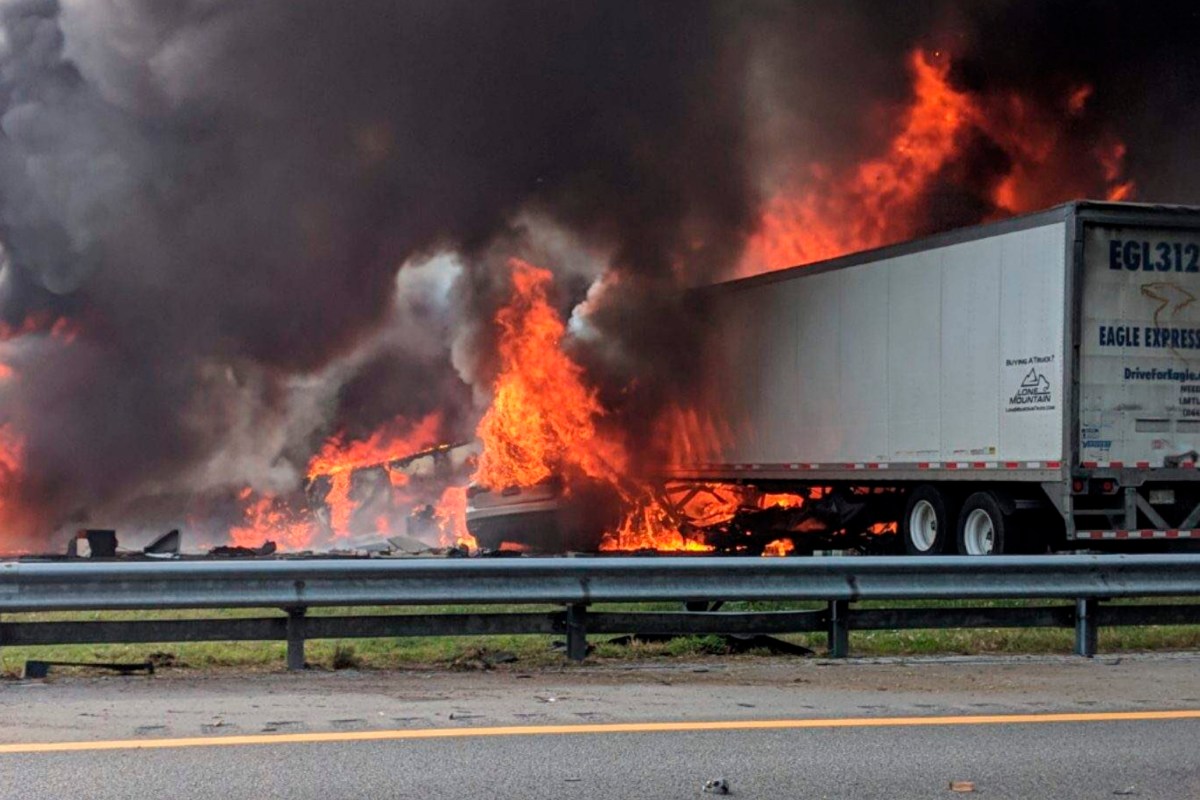 FORT LAUDERDALE, Fla. (AP) — The church van packed with children was headed south – with just an hour to go before reaching Walt Disney World – when it got caught in a fiery pileup involving two 18-wheelers that killed seven people, including five of the youngsters.

Investigators were trying to determine what triggered the accident Thursday afternoon on Interstate 75 near Gainesville.

The Florida Highway Patrol said that two vehicles traveling north – a semitruck and a car – smashed into each other and then burst through a metal guardrail, slamming into the van carrying the children and another semitruck.

Diesel fuel leaked and the mass erupted in a fireball. A fifth car, unable to avoid the chaos, sped through, possibly hitting victims ejected from the vehicles, the highway patrol said. Five of the children, ranging from about 8 to teenagers – from a Pentecostal church in Marksville, Louisiana – and the two truck drivers died. At least eight others were injured, some seriously.

“It is a heartbreaking event,” Lt. Patrick Riordan said Friday. He did not identify the church involved, but an unnamed volunteer from the Avoyelles House of Mercy church in Marksville and quoted in the Facebook page of U.S. Sen. Bill Cassidy said the congregation lost “half of our babies” in the crash.

Church officials did not immediately respond to phone calls.

A pregnant woman who was among those injured delivered a baby, according to a message posted on the Facebook page of the Lighthouse United Pentecostal Church Omaha and signed by Kevin V. Cox, the Pentecostal church’s Louisiana district superintendent.

Cox said a van from a Pentecostal church in Marksville, Louisiana, was involved in the crash and identified the church’s pastor as Eric Descant. He said the pastor’s wife was among at least eight people who were injured and that his granddaughter was among the children killed.

The accident occurred on a clear day along a straight, flat stretch of Interstate 75 outside Gainesville, the home of the University of Florida. It is a busy stretch of a highway that connects Florida to the rest of the South, Indiana, Ohio, and Michigan.

Its lanes fill daily with semis carrying produce and goods that barrel among cars, vans, and buses filled with tourists headed to and from Orlando, Tampa, and southern Florida.

Vinnie DeVita said he was driving south and narrowly escaped the crash — he saw it in the rearview mirror, immediately behind him, according to a report by WKMG .

“If I had stepped on the brake when I heard the noise, undoubtedly, I would have been in that accident,” DeVita said. “And then within probably 15 to 20 seconds of it all, it exploded. I mean, just a ball of flames.”

Nicole Towarek was traveling northbound with her family when they came across the scene. She told the Gainesville Sun that black smoke billowed, people were laid out near vehicles, there were long skid marks across the roadway and emergency workers were converging on the area.

“We kept seeing these little explosions and fire,” she said. “The heat, it was insane.”

The National Transportation Safety Board would normally send a team to help with the investigation, but cannot because of the federal government shutdown. Riordan said Friday that will not impede the highway patrol’s efforts, which could take months.

Florida Department of Transportation Troy Roberts said the agency is investigating whether the guardrail should have stopped the northbound crash from crossing the highway or whether the crash was too traumatic.

“The guardrails are there to stop as much as they can, but there are some things they cannot,” Roberts said. “Unfortunately, in this case, they did not.”

It was the worst accident on I-75 in Alachua County since January 2012, when 11 people died in a chain reaction crash attributed to heavy fog and smoke on the roadway, which crosses Paynes Prairie Preserve State Park.

Officials were criticized then for not closing the road due to worsening conditions, and later installed cameras, sensors and large electronic signs to help prevent similar crashes.

Watch: How Much Does It Cost to Attend an NFL Game?