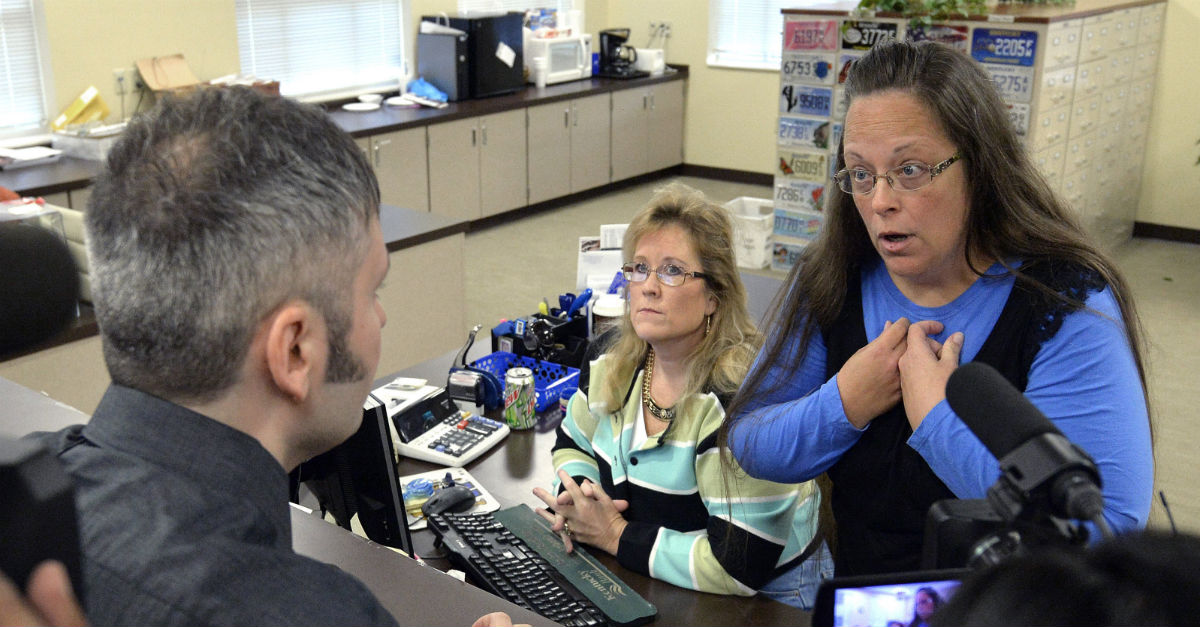 MOREHEAD, Ky. (AP) — A county clerk in Kentucky has again refused to issue marriage licenses to gay couples, invoking her religious beliefs and “God’s authority” — this time in defiance of a U.S. Supreme Court ruling against her.

On Tuesday morning, Rowan County Clerk Kim Davis’ office denied the licenses to several couples. At first, Davis was in her office with the door closed and blinds drawn, and her staff said she wouldn’t be available. But Davis emerged a few minutes later, telling the couples and the activists gathered there that her office is continuing to deny the licenses “under God’s authority.”

The U.S. Supreme Court on Monday declined to intervene in the case, leaving Davis no legal grounds to refuse to grant the licenses. A district judge could now hold her in contempt of court, which can carry steep fines or jail time. As an elected official, Davis can’t be fired.

Davis asked David Moore and David Ermold to leave her office after they were denied a license Tuesday morning — the couple’s fourth rejection. They refused, surrounded by reporters and cameras.

“We’re not leaving until we have a license,” Ermold said.

“Then you’re going to have a long day,” Davis told him.

From the back of the room, Davis’ supporters said: “Praise the Lord! … Stand your ground.”

Other activists shouted that Davis is a bigot and told her: “Do your job.”

She stopped issuing all marriage licenses after the Supreme Court legalized gay marriage across the nation. Two gay couples and two straight couples sued her, arguing that she must fulfill her duties as an elected official despite her personal religious faith. A federal judge ordered her to issue the licenses, and an appeals court upheld that decision. Her lawyers with the Liberty Counsel filed a last-ditch appeal to the Supreme Court on Friday, asking that they grant her “asylum for her conscience.”

Justice Elena Kagan, who oversees the 6th district, referred Davis’ request to the full court, which denied the stay without comment.

After Tuesday’s denials, the rejected couples’ supporters called the American Civil Liberties Union, which filed the lawsuit on their behalf. They asked that the attorneys file that day to have Davis held in contempt.

Shortly after Davis’ remarks in her office, the sheriff’s office cleared the room and building of those gathered to support both sides of the issue.

The two groups lined up on the lawn, on either side of the courthouse entrance to chant at each other. Randy Smith, leading the group supporting Davis, said he knows that if Davis follows the chanted instruction to “stand firm,” she might go to jail.

“But at the end of the day, we have to stand before God, which has higher authority than the Supreme Court,” he said.

The couple Ermold and Moore, together for 17 years, cried and swayed as they eventually left the clerk’s office. Davis’ supporters marched by, chanting.

“I feel sad, I feel devastated,” Ermold said. “I feel like I’ve been humiliated on such a national level, I can’t even comprehend it.”

The clerk’s husband, Joe Davis, came by to check on his wife. He said she has received death threats but remains committed to her faith and is “standing for God.”

Joe Davis said he believes in the Second Amendment and is not afraid: “I’m an old redneck hillbilly, that’s all I’ve got to say. Don’t come knocking on my door.”

He pointed to the gay rights protesters gathered on the courthouse lawn and said: “They want us to accept their beliefs and their ways. But they won’t accept our beliefs and our ways.”