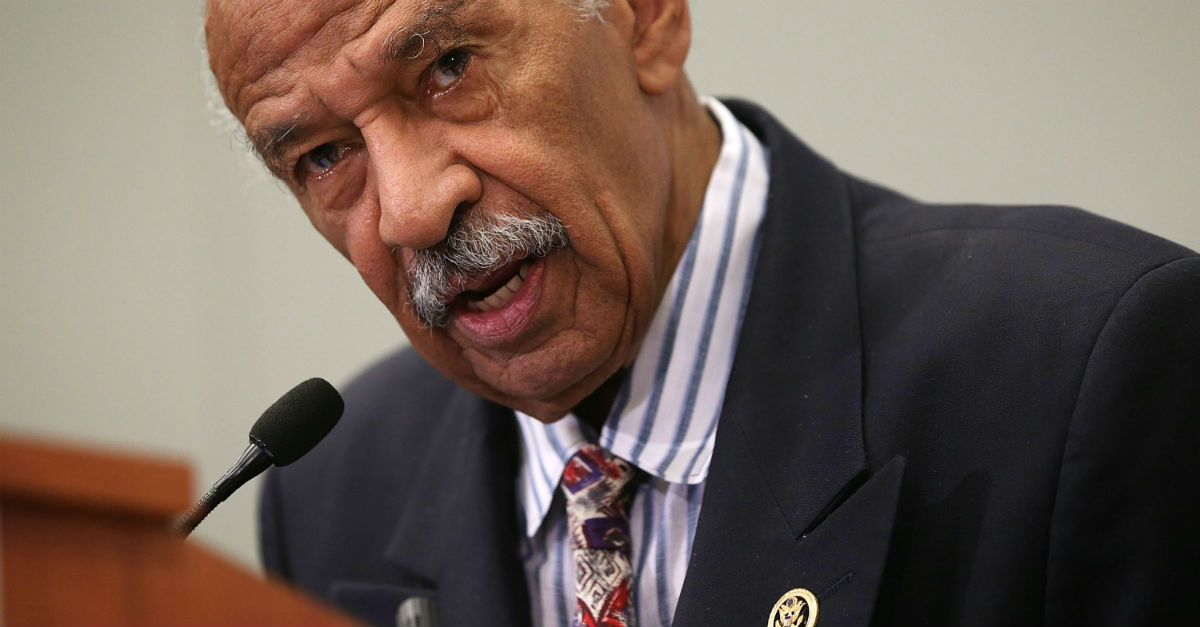 Rep. John Conyers (D-Mich.) is the longest-serving member of the 114th U.S. Congress. And, according to documents obtained by Buzzfeed News, he has sexually harassed women who worked with him, paying a large sum of money to one victim to keep her quiet.

“I was basically blackballed. There was nowhere I could go,” the victim who settled recalled in Buzzfeed’s report. She remained anonymous, fearing retaliation.

During her employment with Conyers, the victim said the congressman would repeatedly ask for sexual favors, invite her to join him in his hotel room and ask that she touch his genitals. She said he even had her work in the evening, on weekends and on holidays to keep him company. At least three other employees described Conyers’ predatory behavior toward the woman in affidavits, which reportedly included touching her sexually and becoming angry when she was accompanied by her husband.

“Rep. Conyers said he needed to be ‘more careful’ because bad publicity would not be helpful as he runs for re-election. He ended the conversation with me by saying he would ‘work on’ his behavior,” said a male employee in his affidavit. The employee said he witnessed Conyers rubbing the legs and body parts of both the anonymous former employee and other women.

The anonymous woman launched a complaint in 2014 after she believed her firing was the result of her rejection of Conyers’ sexual advances. After filing her complaint, a process Buzzfeed described as “daunting,” the woman was offered $27,000 in exchange for her confidentiality.

The settlements were disguised as salaries. The victim would be “rehired” and classified as a temporary employee, though it was clear that she would not actually be working in the office. The payment would then be transferred over a period of three months.

“It is a designed cover-up,” said Matthew Peterson, the man who represented the complainant as a law clerk. “You feel like they were betrayed by their government just for coming forward. It’s like being abused twice.”

Peterson said the process was “disgusting.”

Though the money came from Conyers’ office budget, there is a congressional fund for settlements, which was highlighted by the Washington Post last week. Congress, which lacks a human resources department, has a special Treasury Department account that was established in 1995 dedicated to paying federal employees after employment rules are violated. In the 20 years that this account existed, Congress has used more than $17 million to pay out 264 settlements.

Sexual harassment is listed among the kinds of employment violations eligible for a settlement, though it is not immediately clear how many sexual harassment claims have been settled. Employees only have 180 days to report an incident, which will then launch mandatory counseling, mediation and a series of waiting periods, including a “cooling off period,” Buzzfeed reported.

Conyers’ allegedly affected more than just one employee with his behavior.

“One of my duties while working for Rep. Conyers was to keep a list of women that I assumed he was having affairs with and call them at his request and, if necessary, have them flown in using Congressional resources,” read an affidavit from another former female employee. A different staff member suspected the money used to transport the women came from the taxpayers.

A storm of sexual misconduct scandals and allegations have dominated the national mood of late. Rep. Jackie Speier (D-Calif.) dropped a bombshell revelation earlier in the month, saying that there were some sitting members of Congress that had engaged in sexual harassment. She also explained that she was targeted by sexual misconduct when she worked as a Congressional aide.

Just last week, Sen. Al Franken (D-Minn.) was accused of touching a woman’s breasts while she slept. A second woman came forward to accuse him of groping her butt.

Republicans in the Senate have rushed to un-endorse and disavow Alabama senatorial candidate Roy Moore after he was accused of sexual misconduct by several women. One accuser said Moore touched her over her underwear and tried to force her to touch his genitals when she was 14 and he was 32. Many of the other accusers were between the ages of 16 and 18 at the times of the alleged incidents, when Moore would have been in his early 30s.