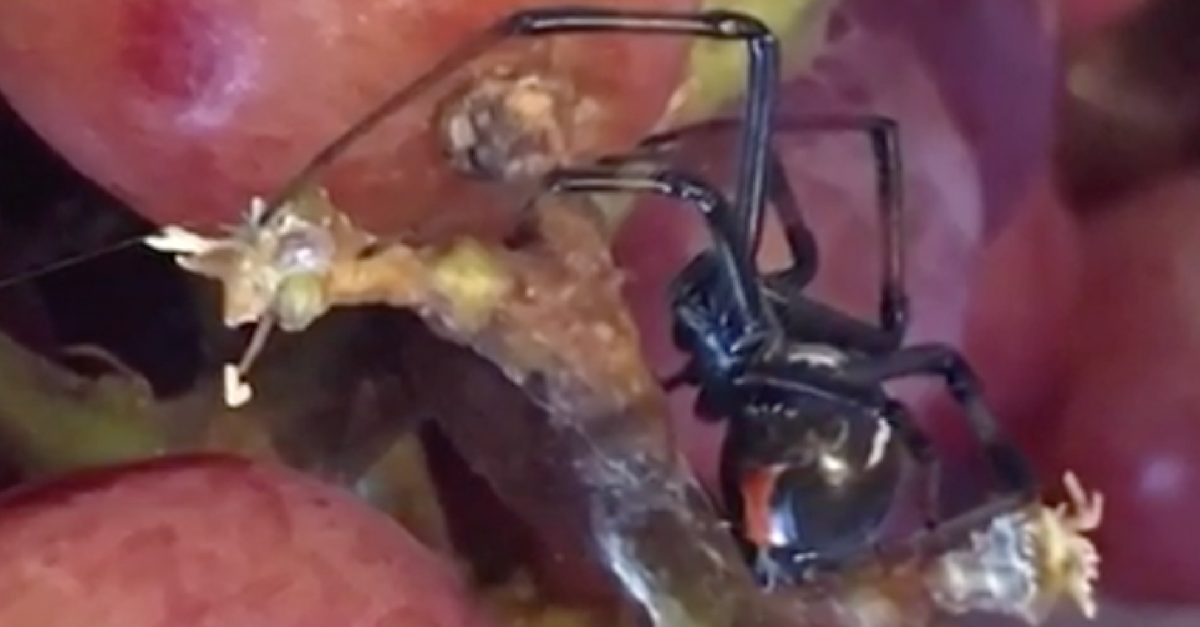 A woman in Omaha, Nebraska got an extremely unfun surprise when she went to snack on some grapes she’d recently purchased at her local Hy-Vee grocery store: pure terror.

Pure terror, that is, in the form of a male and a female black widow spider just hanging out (and doing it?) in her bag of grapes.

The woman saw one of the spiders as she was reaching into the bag to grab a grape to snack on. Then, presumably, she dropped the bag on the ground and briefly considered burning her house down.

According to a totally unacceptable statistic cited by one wildlife expert, about 700 to 800 people a year find black widow spiders in their grapes.

Yeah that’s not going to fly. It’s pretty unreasonable to demand absolutes, but that number needs to be brought down to a hard zero.

According to Hy-Vee spokesperson Christina Gayman, a decrease in pesticide use is to blame for the increase in mini-demons hiding in your produce.

Do you see what you’ve done, you GMO hating hippies!?! You’ve covered our food in spiders! This is the future liberals want! Spider covered grapes. But not I. I want spider free, chemical covered grapes genetically modified to taste like white Myster Flavor Airheads. Because I’m an American, dammit.

To be fair, black widow bites are rarely deadly, though that’s only a mild comfort. You still need to see the doctor immediately if bitten by one. (No word on what to do if you accidentally put one in your mouth when reaching for a grape and it starts biting your insides. See the doctor super duper fast?)

A black widow spider is also more scared of you than you are of it. Yeah, yeah, yeah. That’s what they say about mountain lions and rattlesnakes too. I still don’t want them to pop out of my fridge’s produce drawer. Plus, imagine if that happens to one of your kids. You’re never getting him or her to eat fruits and vegetables again. Then it doesn’t matter if the produce is “GMO-free” or “pesticide free.” That kid is going to spend their life eating cheese and hot dogs and have a massive coronary at 48. Nothing healthy about that, is there GMO crusaders?

This story was originally published July 23, 2018.

Read More: How Does This 7-Month Old Baby Have Such a Glorious Head of Hair???