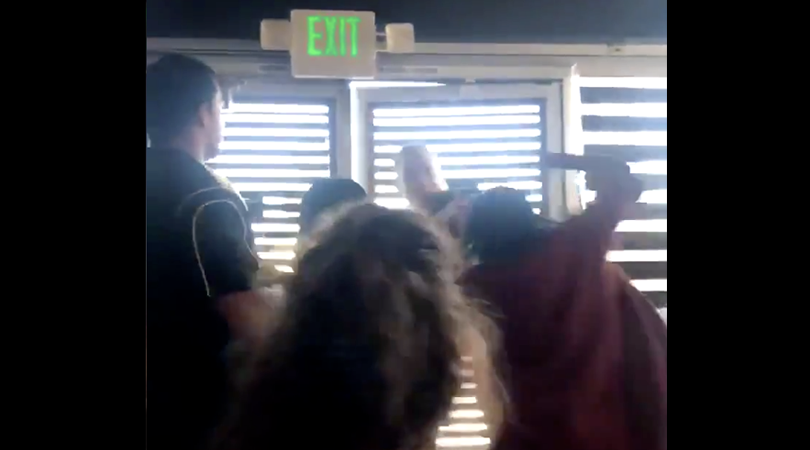 A trending video of a racist man whose fury over not being served sushi quickly enough manifested itself into aggressive racism is making the rounds on social media, specifically Twitter. It is both hilarious and sad. Let’s watch!

The story behind the video is pretty straightforward. A guy went into the sushi restaurant (the Aburi Premium Ayce Sushi Restaurant in Long Beach) in the Los Angeles area on Mother’s Day. There was a wait, because of course there was. The white man didn’t believe there was a waitlist, however, because a) he was apparently completely unfamiliar with the concept of reservations, and b) he didn’t see people literally waiting in line outside the restaurant, so how could there be a wait?

Naturally, the man’s next move was to start accusing everyone around him of being stupid peasant losers before they figured out that’s exactly what he is. This plan backfired spectacularly.

At that point, the man began to flail and scream because he is big and strong and important and not enough people were acknowledging this. He was Dodge Stratus’ing real hard. Then, from somewhere off camera, a gentleman (apparently a black man) told Dr. Big Penis to “get the fuck out” of the restaurant. The angry man needed sushi so badly that in the interest of time he decided to skip the formalities and just went straight to a shouting match, yelling super racist stuff at the black guy, calling him “Monkey Man” and imitating a monkey.

Because this is the only sushi restaurant in the greater Los Angeles metro area the angry racist man was well aware that if he wanted to eat some Aburi sushi, he was going to have to start a brawl for his right to do so. Against the very people denying him his right: Random black customers.

He tried as much, but one lady in particular was not in the mood for any of it. So she punched the man in the face five times, as should be tradition.

Took my mom out to Sushi for Mother’s Day in LA. It was going great until a crazy racist white man started trouble and ended calling a black man “Monkey Man”… Thankfully a nearby woman delivers justice 👊🏽

RT to expose him ⚠️ pic.twitter.com/UavRm6aUSf

The customer who recorded the video on his phone while taking his mom out to what is, unfortunately, probably the most memorable Mother’s Day lunch of her life now, explained the situation in a tweet on Twitter.

This is the viral video from moments before the man’s tirade, when he first proposes his, “If a line can’t be seen, I get to be racist and mean” argument.

This happened just seconds before the above video… pic.twitter.com/IduFKNonc7

The man received four citations from the police and the awesome woman who punched his dumb face received one (that will hopefully be dropped).

Editor’s note: This article was originally published on May 14, 2019.

Watch: Racist Woman Yells at Asian Drugstore Staff For ?Speaking Chinese? in Front of Her