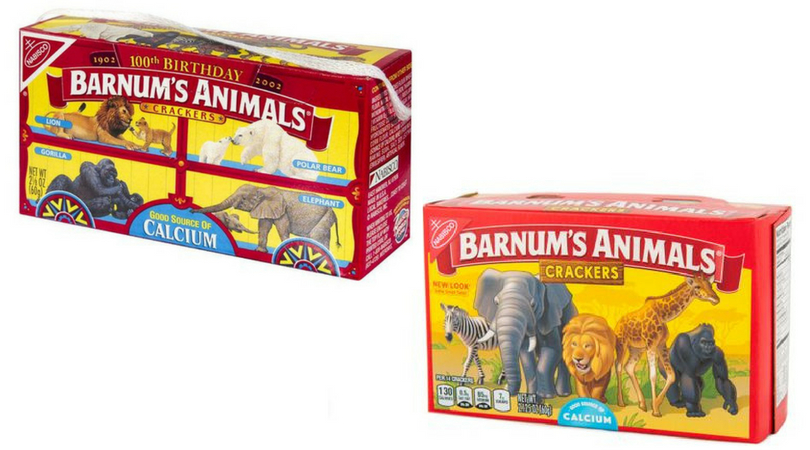 After more than 116 years, Barnum’s Animals Crackers, a classic Nabisco snack, has decided to take off the bars off its packaging. Instead of the animals caged in a boxcar, the new boxes show a now cage-free zebra, an elephant, a lion, a giraffe, and a gorilla roaming free, side by side. Being around for more than century, Barnum’s company say this change is a result of evolution by driving awareness around key animals and environmental issues. The brand believes this change was necessary, feeling it was the right time for the next design to make the brand relevant for years to come, by showing animals in their natural habitat. But, don’t worry, the re-design still features the familiar red and yellow coloring and “Barnum’s Animals” lettering.

Nabisco has been making the iconic Barnum’s Animals Crackers since 1902 and has redesigned their animal crackers box packages after continuous pressure by PETA. The organization has been protesting the use of animals in the circus’ for more than 30 years, eventually getting their wish when Ringling Brothers and Barnum and Bailey closed its doors to the public in 2017, after 146 years of business. Praising their decision, People for the Ethical Treatment Of Animals, celebrated Nabisco’s change by taking credit for the new design.

Through a statement, the PETA stated the re-design was a result of a discussion with the company, reflecting how our society no longer tolerates chaining and caging exotic animals for circus shows. Their argument was based on comparing animals with humans by saying no living being existed simply to be a spectacle or perform tricks for human beings, yet circus and traveling shows use animals as props. Based in Illinois, Mondelez International, the parent company to Nabisco, passed a statewide ban on circus performances with elephants, going into effect in January. More than 80 cities in the United States have fully or partially banned wild animals in circuses.

It’s no surprise Nabisco decided to make the change after it has done their part to help conserve wildlife in the past. According to CNN, they have redesigned boxes for limited distribution and have offered an endangered special collection, raising money for the World Wildlife Fund for the American Zoo and Aquarium Association. They also collaborated with Lilly Pulitzer to raise money for tiger conservation by designing a pastel-colored box.

THANK YOU, Nabisco 🦁❤️ After working with PETA, their new box for Barnum's Animals Crackers perfectly reflects that our society no longer tolerates the caging and chaining of animals for the circus. https://t.co/TZfQDPTand pic.twitter.com/5L9i8W1DMq

Honestly, this was a big change for Nabisco, in that they might even get a bigger audience for taking the next step. If you ask me, as long as they don’t change the taste of their delicious animal shaped crackers, they can change the box all they want. Heck, I’ll still buy my daily share. Win-win for all.

Editor’s note: This article was originally published on March 7, 2019.