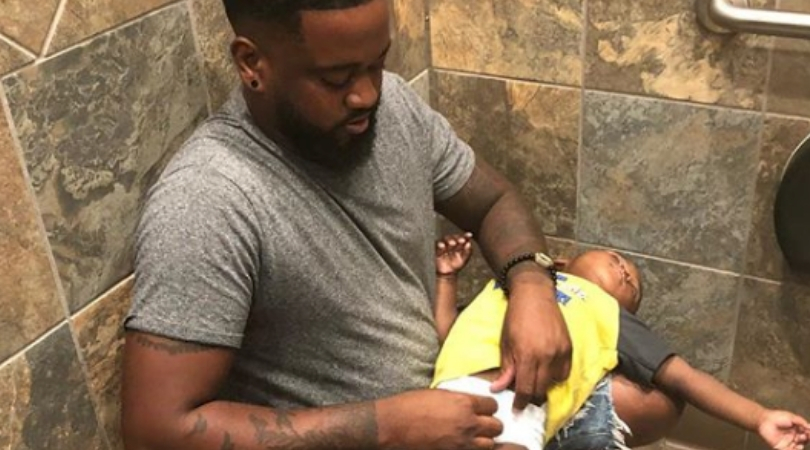 The lack of diaper changing stations in men?s public restrooms is an issue that has begun to start gender role debates. While more dads are suiting up for ?diaper duty’ it?s still pretty obvious that sometimes in public places there is a still an ?expectation? or assumption as to who changes diapers. A photo is going viral on Instagram after a dad was forced to change his son while squatting against the bathroom wall.

Dante Palmer, a father of three boys, decided to share a photo of himself while attempting to change his son’s diaper on his lap, to show how much he struggles when there is no changing station. His post read, ?What?s the deal with not having changing tables in men?s bathrooms like we don’t exist!? He told his followers to take note of his son, and how calm and comfortable he is laid on top of his thighs, stating this was normal for him after it has become a routine for them whenever a diaper change is needed.

This is a serious post!!! What’s the deal with not having changing tables in men’s bathroom as if we don’t exist!! #FLM #fatherslivesmatter clearly we do this often because look how comfortable my son is. It’s routine to him!!!! Let’s fix this problem! I Kaepernick drop a knee to this issue! @theshaderoom let’s show the innovation of fathers! #squatforchange Follow us now!! @3boys_1goal

As a father, Palmer stated he wants to be a ?hands-on? dad and tries to do his part to help his children every day. He encouraged fathers to speak for other fathers, creating the hashtag #fatherslivesmatter to get rid of sexist bathroom facilities. Palmer’s isn’t the only post that has gone viral relating to men?s restrooms and diaper changing stations.

In June, Chris May also posted a similar photo with a picture of his 8-month-old daughter lying on a blanket in the restroom. Mau stated he was sick of having to change his daughter on ?disgusting floors? due to only having changing tables in the women?s bathrooms. The post read:

?If it?s a public place with public restrooms in the generation of equality among genders and races then how about making sure us fathers can change our children?s diapers on a goddamn changing table like the mother?s can. Am I asking too much??

Mau’s post sparked users on Facebook, with many fathers agreeing with his frustration, sharing their own stories. The lack of proper stations in men?s restrooms still remains a major problem, that even celebrities around the world are making it known, asking for a solution. Ashton Kutcher revitalized a conversation on gender equality and single parent or two father homes after the birth of his daughter.

The actor also wrote on Facebook about the situation stating he was frustrated with the gender norms. Kutcher started a petition for Target and Costco to provide changing stations, gathering 100,000 signatures forcing the stores to pledge to include stations in family bathrooms in all new or remodeled stores.

In 2016, President Obama signed into law the Bathroom Accessible in Every Situation ACT, also known as BABIES act, that calls on all public building to include baby change station in their bathrooms, including the men?s restroom. Currently, New York is the only state that requires changing tabs in all of its public restrooms.

Editors note: This article was originally published on September 28, 2018.