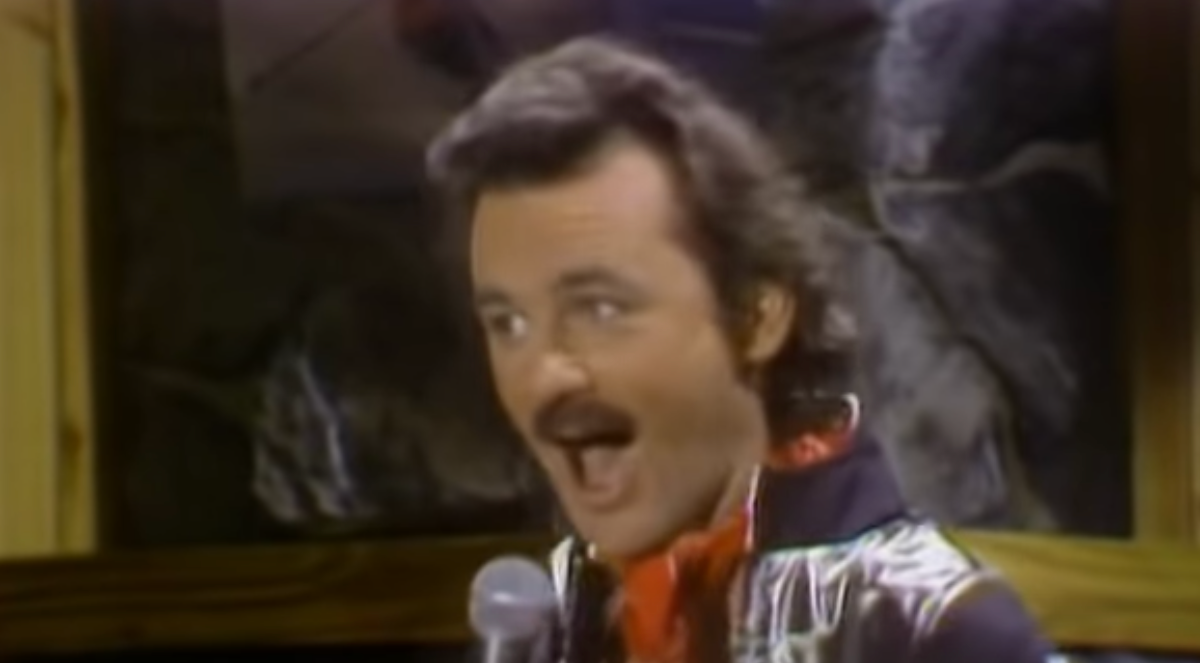 Teaming up alongside other original SNL cast members like Dan Aykroyd, Gilda Radner, Jane Curtin, and John Belushi — not to mention regularly working with Steve Martin — would have been as imposing as the New York skyline for the average comedian, but we all know that SNL didn’t hire an average guy at all. They got an already seasoned National Lampoon veteran who knew most of his new costars anyway. They got Bill freakin’ Murray.

Of course, Studio 8H is a tough place for anyone to succeed, either in the eyes of the producers or the audience. Or both. Though Bill Murray would go on to establish himself as a box office draw thanks to films like Caddyshack and Groundhog Day, not to mention eventually be an Oscar nominee, he wasn’t too well received at first on the show.

This brings us to possibly our favorite Bill Murray sketch on Saturday Night Live. It’s not as beloved as some of the others on this list, but it is quintessential Bill Murray.

Murray, sarcastically apologizing for not being funny — or not being funny correctly — in response to critics who didn’t like him compared to the recently departed and then-beloved Chevy Chase. It’s just perfect. And a nice quick shout out to his brother and future SNL cast member Brian Doyle-Murray, who was apparently going to starve if the audiences didn’t laugh at his jokes.

The apology skit is definitely a comedy hipster moment on the show. One lost to time for all but the most fervent of Bill Murray fans. Nick the Lounge Singer, on the other hand, is an SNL that is still talked about regularly today. Nick’s rendition of the Star Wars theme was one of the show’s early big hits, no doubt inspired by Murray seeing many a lounge singer while out at night in 1970s New York City. If the apology was quintessential Murray in terms of his personality, this is the Murray we all know and love at his most free, performance-wise. They really need to have this guy back on as a musical guest.

The Nerds recurring skit is definitely more a product of its time than a timeless classic in terms of humor, but it’s hard not to love a sketch with Gilda Radner, Buck Henry, and Jane Curtin alongside Murray.

Probably better known as “Cheeseburger cheeseburger”, this Saturday Night Live sketch featuring Dan Aykroyd, John Belushi, Bill Murray, Laraine Newman and pretty much the entire rest of the SNL cast was something of a sensation when it premiered, though it also doesn’t quite have the staying power of the Festrunk Brothers or Nick the Lounge Singer.

Unlike most SNL cast members over the years, Bill Murray doesn’t have a ton of memorable Weekend Update moments. That said, his Oscar predictions were such a hit that they brought it back years later, long after he’d left the show.

It didn’t take long for Bill Murray to become a full-fledged Hollywood star after he left SNL so of course they had to have him back as a guest host. But there was a new sheriff in NYC by the name of Eddie Murphy. Seeing these two on the screen together so long ago on SNL is pretty surreal, and hilarious.

One of the craziest things about Saturday Night Live is seeing superstars like Will Ferrell or Bill Murray relegated to ensemble duty. That’s exactly what Murray does here alongside Laraine Newman, Jane Curtin, and a cameo from Paul Shaffer. Still a hilarious script though.

Watch: Vin Diesel Debuts New Song, Because He Probably Has Nothing Better To Do