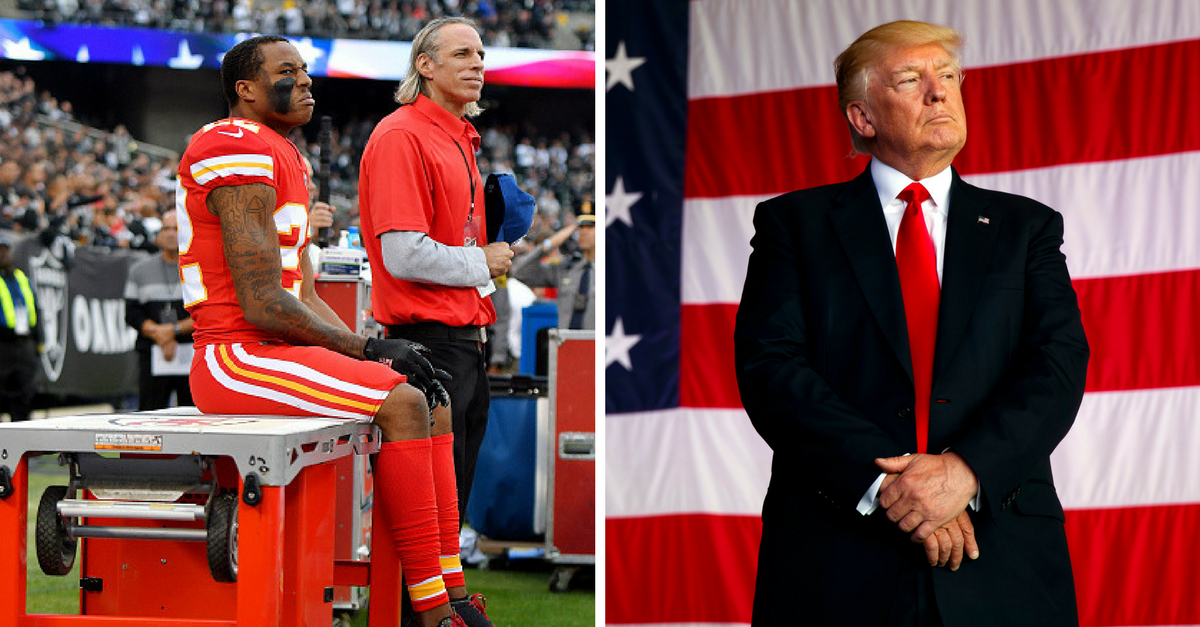 After President Trump railed against Oakland Raider’s running back Marshawn Lynch for standing during the Mexican national anthem and then sitting for the Star-Spangled Banner, Kansas City Chiefs cornerback Marcus Peters is ready for the three of them to sit down and talk it out.

“[What’s] going on big dog,” Peters wrote to the president on Twitter. “I know we got a lot that needs to be [talked] about. How about we set up a [sit] down with you, me, @MoneyLynch and more and we talk about some s**t [sic].”

“Not being disrespectful just wanna talk,” he later added in another tweet.

Not being disrespectful just wanna talk

RELATED: “Great disrespect!”: Trump called out a star NFL running back for his display in Mexico

It appears Peters, who grew up in Oakland with Lynch, wishes to speak with President Trump following his renewed outrage at athletes taking a knee for the national anthem over the weekend. More specifically, the president was unhappy with Lynch’s actions during his team’s game against the New England Patriots in Mexico City, tweeting on Monday, “Marshawn Lynch of the NFL’s Oakland Raiders stands for the Mexican Anthem and sits down to boos for our National Anthem. Great disrespect! Next time NFL should suspend him for remainder of season. Attendance and ratings way down.”

Marshawn Lynch of the NFL’s Oakland Raiders stands for the Mexican Anthem and sits down to boos for our National Anthem. Great disrespect! Next time NFL should suspend him for remainder of season. Attendance and ratings way down.

He has, however, indicated that he supports former San Francisco 49ers quarterback Colin Kaepernick, who began kneeling during the song last season to protest police brutality and institutionalized racism in our country. Peters’ father has also told the Kansas City Star that he believes his son is protesting for the same reasons.

Chiefs chairman Clark Hunt has made it clear the organization prefers for their players to stand during the anthem. For the last three games, Peters has not been present on the field for the song and has exited the team’s locker room after the anthem finished playing. During this time period, no other Chiefs players have sat during the anthem.

“I ain’t trying to get into a back and forth conversation of me trying to prove that I’m not being disrespectful or that I am being disrespectful toward the American flag,” Peters explained last month. “Man … come on, man. I’m an American, bruh. I’m an African-American that was born in this wonderful country that we all can live in. How about we start all protecting each [expletive] other and come together, you feel me? It will be better for it.”

RELATED: Star NFL player’s anthem display in Mexico was expected, but then he took it a step further