Teacher Caught On Video Grabbing Student By Throat, Slamming Him on Table 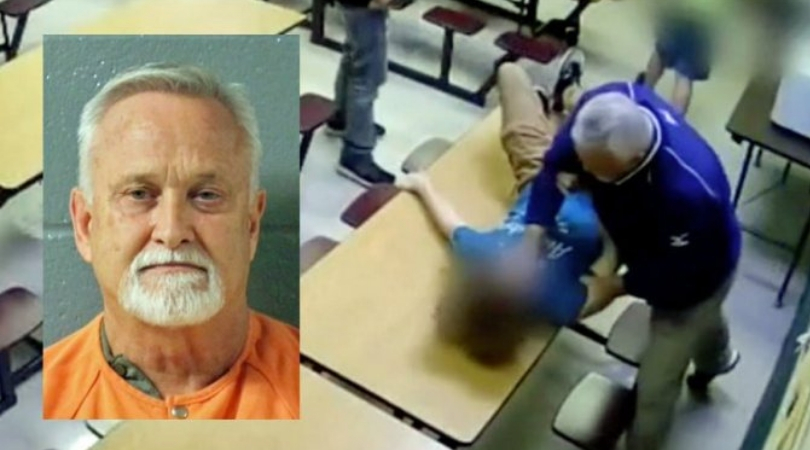 The Lumpkin County Sherriff’s Office released a surveillance video from Lumpkin County Alternative School in Georgia, showing a high school teacher grabbing a student by his throat and throwing him onto a cafeteria table. The incident occurred on April 19, 2017, involving now former teacher and coach Tim Michael Garner. The school serves as a disciplinary alternative, dedicated to students who have gotten into trouble at other schools in the district and meet during the day at Mountain Education Charter High school when the schools share the facility.

Garner is now facing felony charges for the incident but states his actions were justified after the student made a mess in the cafeteria, didn’t listen to him, and got aggressive, forcing him to get physical. The video shows Garner pushing the student on the table with force, grabbing him in a chokehold position and pushing him onto the table. The 17-year-old is seen desperately trying to escape by flailing his arms and kicking his legs, yelling at Garner to let him go. The student nearly breaks free, falling on the side of the table, but Garner pins him down once again. At least two students and a paraprofessional witness the fight.

According to reports, the incident began when the student was flipping a Styrofoam tray between two tables, and “getting food all over the place.” 61-year old Garner, who described the student as violent with a troubled past, stated the student-initiated contact when he attempted to leave the cafeteria, pushed him, and was afraid of a head-butt or assault with a possible weapon.

“The truth of the matter, as the video clearly shows, is that Coach Garner decided to subdue and choke a child for almost 50 seconds as a method of exercising discretionary discipline for a minor infraction in the lunchroom.”

He added the school system attorneys have since made attempts to dismiss Garner’s liability under the doctrine of sovereign immunity, but believe they can overcome in court if necessary. Garner was immediately fired after the incident and turned himself into Lupkin County Detention Center, booked on charges of first-degree cruelty to children and simple battery. His bond was set at $7,000.