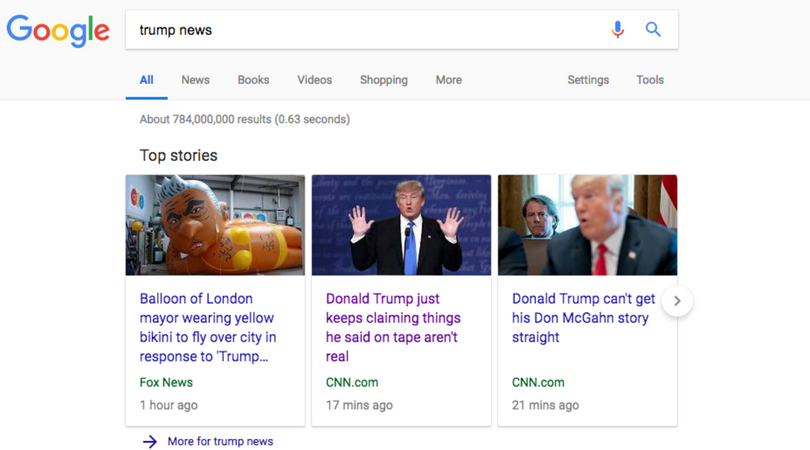 Hold onto your searches, because the Trump Administration is considering imposing regulations on Google, which pretty much means we are all doomed. This comes after President Donald Trump tweeted a tirade, complaining about the media outlet and saying it was ?rigged? when someone searched for his name because the results only showed the negative news stories about him.

Trump?s main comment claimed Google is ?hiding information and news that is good.? The president believes Google controls what people can and can?t see, which is why his team will “address” the situation and take a look at the problem. Google responded to the allegations by saying that the company was taking a look, but its main objective is to make sure users receive the most relevant answers in a matter of seconds. The company defended their ideology, saying the search is not used to set political agenda and they don’t bias the results in favor of any political ideology.

….results on “Trump News” are from National Left-Wing Media, very dangerous. Google & others are suppressing voices of Conservatives and hiding information and news that is good. They are controlling what we can & cannot see. This is a very serious situation-will be addressed!

Trump continued his attack on Wednesday, August 29, tweeting a time-lapse video showing how Google promoted Ex-President Barack Obama?s State of the Union, addressing on its homepage from 2009 and 2016. He argued how that stopped after he took office. Trump followed up with a series of ambiguous warning, urging the all media companies, Facebook and Twitter as well, to treat all users fairly of they will face ?serious consequences.?

Trump’s economic advisers Larry Kudlow agreed with the President? remarks, following up with reporters, stating there needs to be a form of regulation for Google, which the White House is currently looking at it. All the administration wants is fairness and not regulation. Google?s answer? The Internet Association, a trade group representing the largest social media and technology companies, fought back against the President’s attack, alleging that conservative voices are now more prominent than ever due to social media. CEO Michael Beckerman said that the platforms themselves don’t have a political ideology because it counters the business interests of companies to stifle the speech of half their customers.

Of course, Google is the largest target of Trump’s complaint. Earlier this month, the president tweeted, ?Social Media Giants are Silencing Millions of People.? Google search results are tailored to each person who is searching, such as their location. So, could it be that this is what Trump first saw due to his location? It?s not clear where Trump was tweeting the results he personally reviews for googling his own name or is he was responding to an article in the conservative blog, PJMedia, claiming ?96 percent of Google searches results for ?Trump News are from liberal media outlets.?

After reading this whole twitter feed, I have to say that I was a bit exhausted. So, naturally, I decided to run my own search on Google, typing ?Trump News?, and the first stories showed CNN, then Fox News, the BBC. The first title that came up?  “Donald Trump just keeps claiming things he said on tape aren’t real?…welp. Long story short, watch out with your searches, you never know who or what might be watching.