After the Eagles won their first-ever Super Bowl, Philly’s celebration was absolutely insane 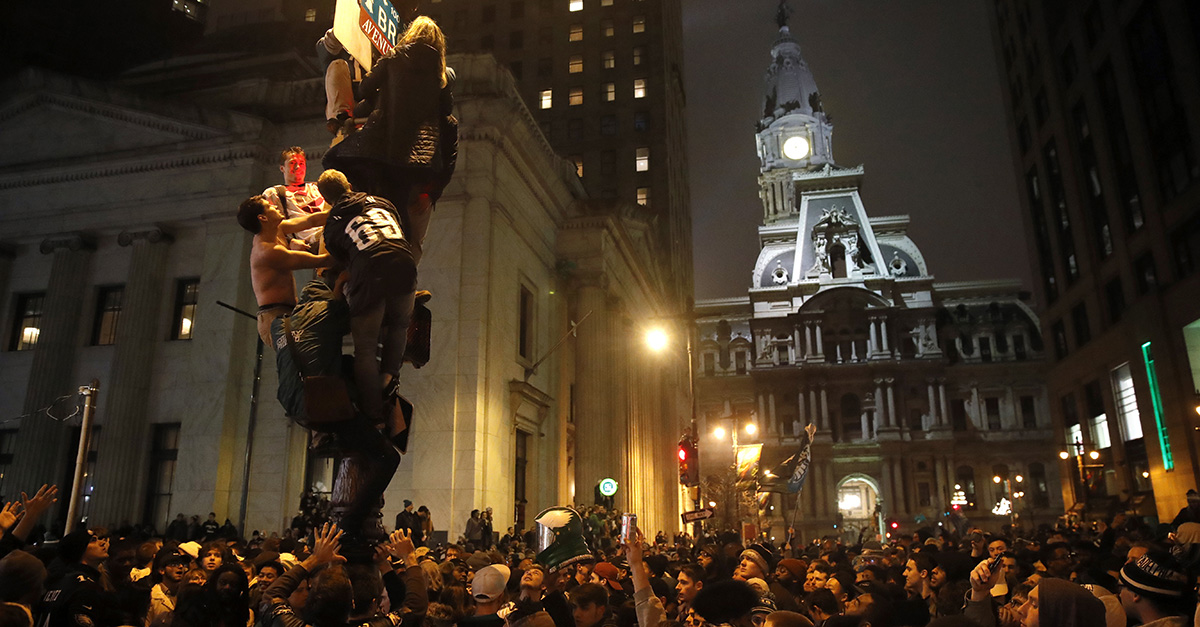 The Philadelphia Eagles won their first-ever Super Bowl and first NFL championship since 1960, and fans in the City of Brotherly Love celebrated — in some precincts, with no mercy.

The city was lit, literally, following the Eagles’ 41-33 victory over Tom Brady and the favored New England Patriots, who were shooting for the franchise’s sixth Super Bowl championship. After the win was secured in the game’s waning seconds, Philly fans filled the streets almost instantaneously.

Just as quickly, social media showed all the world how a city known for underdogs like Rocky Balboa and for passionate sports fans who once bombarded Santa Claus with batteries throws a championship party. It isn’t always pretty.

THE CITY OF PHILADELPHIA IS BURNING DOWN pic.twitter.com/lcbHLd894P

Fans climbed up traffic lights until they could stand no more, coming completely free from their moorings and falling to the street like trees giving way to lumberjacks. The seemingly impossible was accomplished, as determined fans didn’t let the city’s strategy of greasing the poles with hydraulic fluid keep them from doing their thing.

Fans told the city just what they thought of their feeble attempt to guard the poles as chants of ?F**k that grease? filled the air. A number of fans opted to chug beers once they reached their perches.

Philly starting to heat up pic.twitter.com/1c2aSndvof

At the Ritz-Carlton, one daring man climbed atop the entry awning. Of course, other fans then followed suit until the thing was packed with people, could no longer hold and collapsed to the ground.

The Ritz canopy has collapsed pic.twitter.com/9LBolLtIPY

More chants were heard around the city as fans made fun of Brady with taunts ?F**k Tom Brady? and lauded their new hero, quarterback Nick Foles, who went from backup QB to Super Bowl MVP. Fans showed their love with chants of ?Big D**k Nick.?

And what would a celebration be without revelers smashing storefront windows and a little looting too boot?

RELATED: Astros fans step up to the plate with an incredible “hat trick” at the World Series parade

As the midnight hour struck, things started to get a little out of control, reports the New York Post. Windows at the Macy’s near City Hall were smashed. A man hopped inside the window display and started taking a selfie with a mannequin. A T-Mobile store also had its windows smashed.

Dustin Fisher, 19, told the Post, ?This guy took a can of Bud Light and boom ? shattered the window.?

As a show of support for the Philadelphia men and women in blue, the Boston Police Department, who’ve dealt with a few of these city-wide championship celebrations, tweeted words of encouragement to their brothers and sisters: ?From the men and women of @bostonpolice to our brother and sister officers of @PhillyPolice: ?Congratulations to you and your city. Please be safe out there,’? Boston Police tweeted out, which was retweeted by the Philly police.