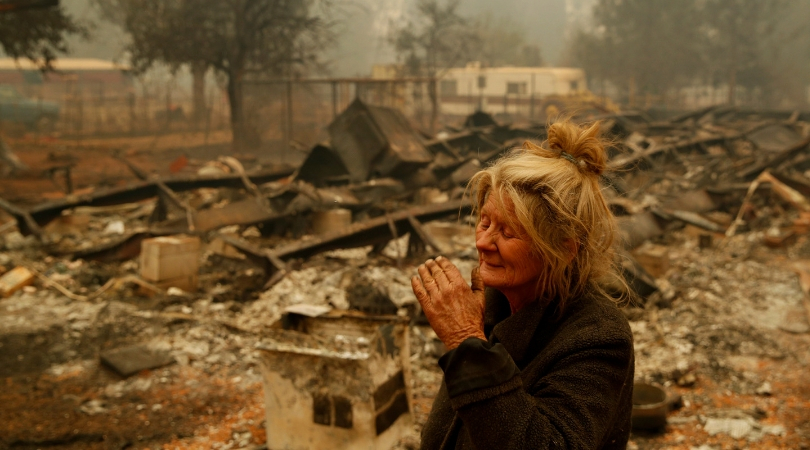 PARADISE, Calif. (AP) — The Latest on California wildfires (all times local): 7:45 a.m. The number of buildings destroyed by Southern California’s huge wildfire has risen to 1,500. Fire officials also reported Monday that the count of damaged buildings is now at 341.

Firefighters continue to mop up and patrol the 151-square-mile (391-square-kilometer) burn area in Los Angeles and Ventura counties. The fire erupted Nov. 8 and was swept by powerful winds through suburbs and wilderness, killing three people and forcing thousands to flee.

Repopulation of evacuated areas continued through the weekend and containment lines were completed around 94 percent of the scorched area. Rain is in the forecast for Wednesday, and the National Weather Service warns there could be mudslides and rock slides.

Fire officials say the Northern California wildfire that killed at least 77 people continues to burn in rugged terrain but that firefighters have managed to boost their containment of the blaze.

The California Department of Forestry and Fire Protection said Monday that the fire is now 66 percent contained. That’s up from 60 percent Sunday morning and represents a slight increase from the 65 percent containment reported Sunday night.

The fire has charred 236 square miles (611 square kilometers) since it ignited Nov. 8 near Paradise, a town of 27,000 that was leveled. Butte County Sheriff Kory Honea said Sunday that about 1,000 names remain on a list of people who have not been located. Rain is forecast for Wednesday in the Paradise area, which could help the 5,000 firefighters battling the blaze make more progress. But officials say they worry rain could complicate the efforts of the crews searching for human remains.

Rain in the forecast could bring relief for those working to tame a devastating Northern California fire and frustration for those searching for remains of victims. The search for bodies or bone fragments left behind in the so-called Camp Fire took on new urgency Sunday.

Hundreds of searchers fanned out to poke through the ashen rubble in Paradise before rains can wash away signs of the dead or turn the dusty debris into a thick paste. Authorities say at least 77 people have died in the deadliest U.S. wildfire in a century.

Search teams in white coveralls, hard hats and masks used sticks to move aside debris and focused on vehicles, bathtubs and what was left of mattresses while a cadaver dog sniffed for clues.