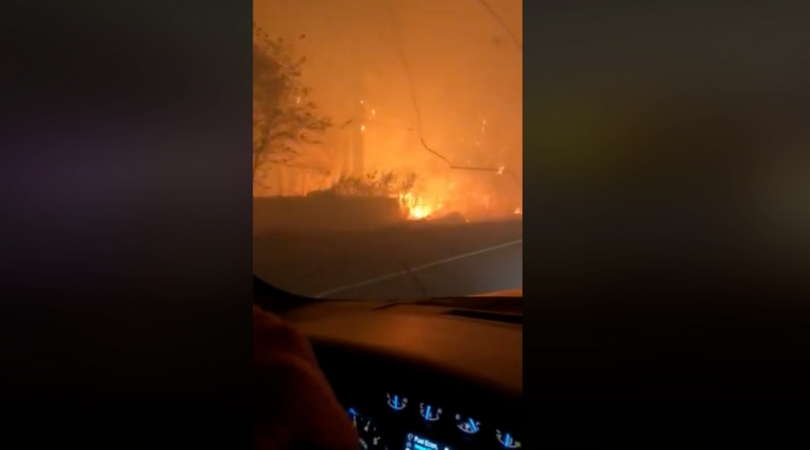 It’s been a devastating time for Californians, as massive fires have been reported throughout the state. While searching Twitter for updates of the fire and evacuations, I came across this adorable, but heartbreaking video of a Father and a toddler trying to escape through heavy traffic.

The video starts with the toddler’s high voice, asking her dad why there is fire surrounding them, repeating “We’re going to get on fire.” Quickly, Joe Allen reassures his daughter that they are fine, staying calm as he steers his car through flames and smoke. Allen and his wife Whitney, who drove the second family car behind them with their older daughter, were evacuated after their home was affected by the Camp Fire.

The father tried his best to keep little Olivia calm by repeating to her that everything was going to be okay over and over, giving her peace of mind. Although you can’t see Allen in the video, you can see him navigating the car through a congested highway. At one point it pans the area to show the massive flames on the side making the sky orange.

As Olivia keeps asking why they are there, you can then hear Allen trying to distract her from the view of the flames, by saying and singing, “Hey, guess what? We’re not gonna catch on fire. We’re gonna stay away from it and we’ll be just fine, OK? We’re doing all right.”

Safe to say the emotional video quickly went viral, showing how dangerous the situation in California actually is, and due to the way the father handled the situation. At the end of the video, when the father-daughter duo finally makes it safely through the wildfire, Olivia praises her dad saying, “You did it!” To which her dad adorably responds, “We did it together.”

The family’s effort to evacuate ended safely, as they all managed to escape and are currently in Chico. The Allen’s were among thousands of those who fled from Paradise, but unfortunately, some weren’t that fortunate enough. As of today, Reports say the wildfires are the deadliest the state has ever seen, with officials discovering the remains of 13 more around the state, bringing the death toll to 42

I had never heard of a fire tornado until today and I really kind of hope I never see a firenado again in my life. This legitimately feels like biblical levels of destruction. #CaliforniaFires pic.twitter.com/JxUw3C1i3B

Damn, this is what escaping in a panic looks like. This looks like Walking Dead bro. California deals with these wildfires so often you think some Silicon Valley tech genius would’ve figured out a solution to mitigate this by now. pic.twitter.com/YNQvu29dnt

Allen’s video isn’t the only one showing the tragic event, after several people went to social media to show the impact the wildfires have made throughout the last few days. Celebrities even began to tweet out their condolences and thank you’s to the fire departments who are helping to put out the fires.

The Camp Fire, which started Thursday morning, is one of the three wildfires burning in California, burning through 117,00 acres and is 20 percent contained. Meanwhile, The Hill Fire in Thousand Oaks has charred more than 10,000 acres and the Woolsey Fire in Malibu has burned nearly 8,000 acres.