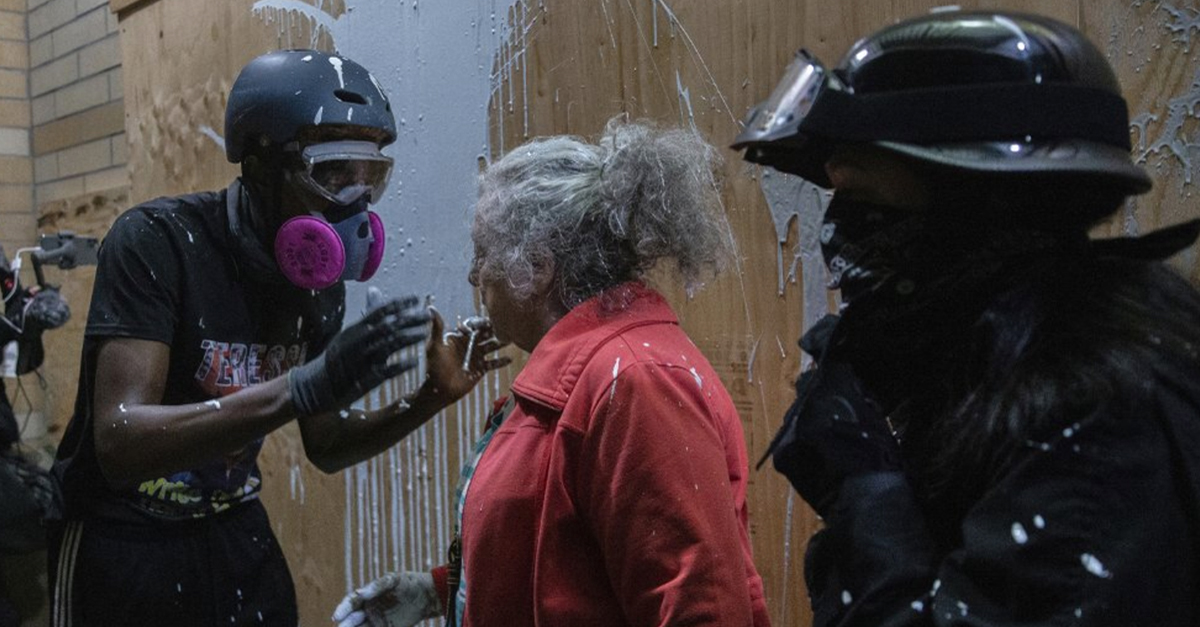 (Mark Graves /The Oregonian via AP)
A woman who lives in a Portland neighborhood targeted by protesters argues with a few black-clad demonstrators after being splashed with white paint in front of a Portland Police Bureau precinct that was being vandalized, late Thursday, Aug. 6, 2020. The woman was trying to stop the protesters from vandalizing the building when she was hit with the paint. (Mark Graves /The Oregonian via AP)

A crowd of about 200 people, some wielding homemade shields, clashed with police early Friday in Portland, Oregon for the third consecutive night as two other Black Lives Matter rallies proceeded peacefully elsewhere in the city, authorities said.

The demonstration with unrest came hours after the city’s Democratic mayor pleaded for demonstrators to stay off the streets, saying that those who barricaded the doors to a police precinct the night before and tried to set it ablaze were not demonstrators, but criminals.

Mayor Ted Wheeler said the violent protesters are also serving as political “props” for President Donald Trump in a divisive election-season where the president is hammering on a law-and-order message. Trump has tried to painted a picture of the Portland protesters as “sick and dangerous anarchists” running wild in the city’s streets.

The chaos that started Thursday night and lasted into Friday morning in a residential neighborhood about six miles (10 kilometers) from downtown marked the 70th night of unrest in Portland since May 25, following the George Floyd killing in Minneapolis.

The demonstrations this week, however, are noticeably smaller than the crowds of thousands who turned out every night for about two weeks in July to protest the presence of U.S. agents sent by the Trump administration to protect a federal courthouse that had become a target of nightly violence.

This week’s clashes nevertheless ratcheted up tensions in the city after an agreement last week between state and federal officials seemed to offer a brief reprieve. The deal brokered by Democratic Gov. Kate Brown called for agents from the U.S. Customs and Border Protection, U.S. Marshals Service and U.S. Immigration and Customs Enforcement to pull back from their defense of the Mark O. Hatfield Federal Courthouse starting July 30.

Early Friday, as peaceful demonstrations proceeded elsewhere in the city, a group of people gathered at a park in eastern Portland and marched to the local police precinct, where authorities say they spray-painted the building, popped the tires of police cars, splashed paint on the walls, vandalized security cameras and set a fire in a barrel outside the building. One officer was severely hurt by a rock, police said, but no additional details were provided.

An older woman who tried to stop the vandalism was hit with a bucket of white paint and then got into a shouting match with those in the crowd as one protester tried to wrap her in yellow police tape — a conflict caught on video. Another elderly woman using a walker was also captured on video trying to put out the fire with a fire extinguisher while a black-clad protester blocked her way.

Tear gas was used by Portland police on protesters Wednesday for the first time since the U.S. agents left the city, but officers did not use it Thursday despite declaring the demonstration an unlawful assembly.

Wheeler, who was tear-gassed several weeks ago with protesters as he stood with them outside the federal courthouse, warned the demonstrators Thursday that their actions are helping Trump in his bid for a second term.

“Don’t think for a moment that if you are participating in this activity, you are not being a prop for the reelection campaign of Donald Trump — because you absolutely are,” he said. “If you don’t want to be part of that, then don’t show up.”

The Pacific Northwest Youth Liberation Front, which advertised the rallies Wednesday and Thursday on social media, used Twitter to announce the events with the slogan “No cops. No prisons. Total abolition.”

The group, which described itself as a “decentralized network of autonomous youth collectives dedicated to direct action towards total liberation,” did not immediately reply to a request for comment.
Wheeler said the city anticipates more such events through the weekend.

About the author: Gillian Flaccus