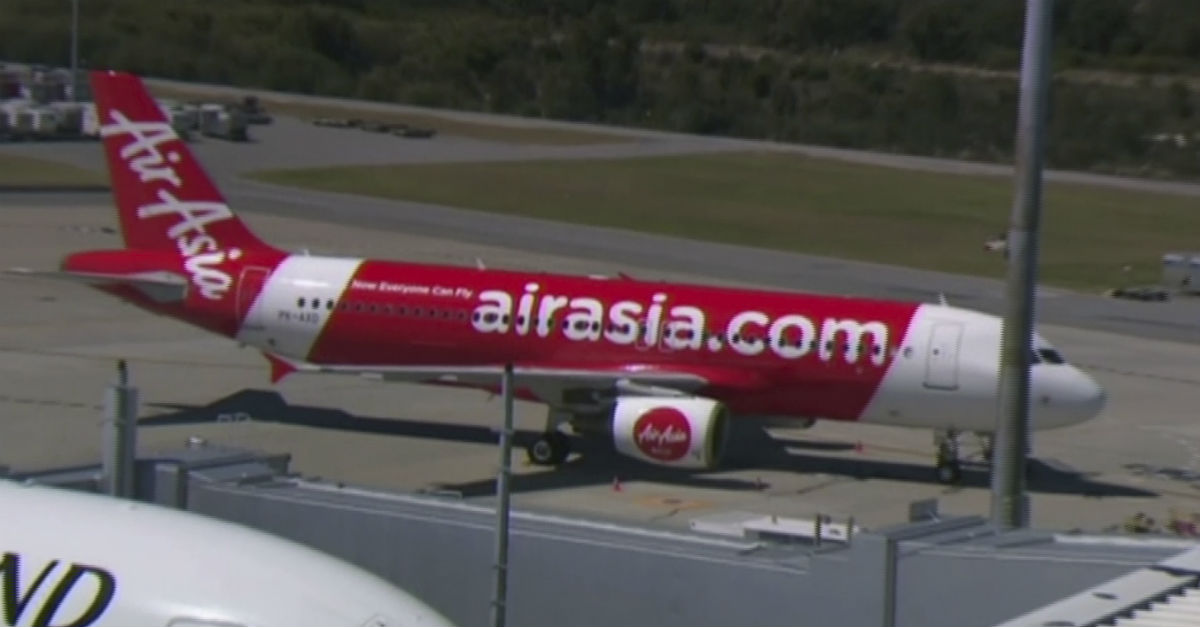 Channel 9 via AP
This Sunday, Oct. 15, 2017 image made from video shows an AirAsia plane at an airport in Perth, Australia. Passengers on the Indonesia AirAsia flight from Australia to the holiday island of Bali described a panicked flight crew announcing an emergency and oxygen masks dropping from the ceiling after their airliner lost cabin air pressure and rapidly descended. (Channel 9 via AP)

Passengers on an AirAsia flight from Australia to Bali criticized the crew members for screaming during a controlled emergency descent, adding to the panic.

Indonesia AirAsia Flight QZ535 was traveling from Perth to Bali when air pressure was lost in the cabin. The pilot responded by rapidly descending the aircraft by 24,000 feet mid-air, but passengers accused crew members of adding to the panic by screaming and announcing “emergency, brace, crash positions” as oxygen masks dropped from the ceiling. Passengers also reported that many of the announcements were not given in English.

.@AirAsia is blaming a technical issue for a mid-air emergency that saw a flight to Bali plummet more than 20,000 feet. @Matt_Tinney #7News pic.twitter.com/skKOMpJicj

Many joined in the criticism, some even suggesting that the airline review its training for flight attendants.

Others excused the reaction.

The crew are human too, not emotionless robots. No one can predict how they’ll react under traumatic circumstances.

4) Plunging 20,000 feet – was that an out-of-control event? No. When cabin depressurisation is detected, the most urgent thing to do is for the pilot to put the aircraft into a steep controlled descent to get to a flight level where air is breathable #QZ535

5) cabin pressure loss can be due to many things – mainly the formation of a crack somewhere. The pilots would have about 15-20 seconds of useful consciousness to bring the aircraft down to a breathable air level #QZ535

12) What happened on board the #QZ535 is what Airbus had warned about in a note published in 2007, that the overall aviation industry does not provide sufficient training to flight crew and cabin crew for cabin decompression awareness

“The safety of our guests is our utmost priority,” AirAsia said in a statement. “AirAsia Indonesia apologises for any inconvenience caused.”

RELATED: California inmates are being paid $1 an hour to help battle the massive wildfires