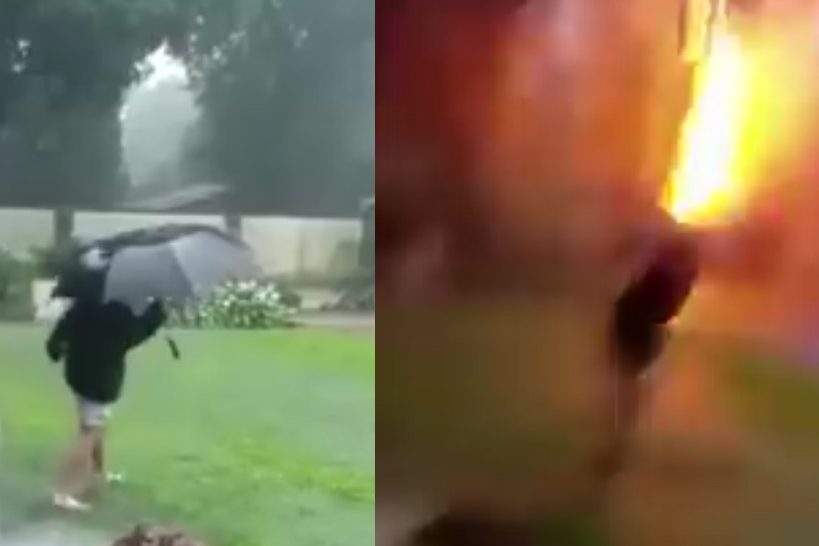 Video captured by Argentinian mom Carolina Kotur shows the moment her son was nearly struck by lightning as he played in their yard during a recent storm. Even with other tall objects apparently around him, the electricity aims right for him.

The unnamed 12-year-old boy survived the near-strike, reports the Daily Mail. In the moments before the lightning bolt, the boy is playing with an umbrella and a drainpipe gushing water.

Kotur says she was inside comforting her daughter, who is frightened by such storms, when she began filming.

“It was morning, I was with my daughter in the room calming her, because she is scared of lightning, says Kotur. “My son was walking in the rain and I started filming because I was making a joke, and right next to him the lightning struck.”

“Thank God nothing happened to him,” she added.

The Daily Mail reports that the strong storm system has claimed the lives of people and livestock in Argentina and neighboring Paraguay.

Are Umbrellas Trying to Get Us Killed?

They don’t actually seem very safe, do they? What about walking around during a thunderstorm with a metal rod actually sounds like a good idea? That’s like wading into a Florida pond with a pound of meat tied to your dick and being surprised when a gator takes a piece out of you. And there are plenty of videos of people holding umbrellas getting absolutely roasted by a bolt of lightning.

So the question must be asked. Are umbrellas trying to kill us? Before plastic how did every person not carrying an umbrella get blasted by lightning? Buy a raincoat.

This article was originally published October 23, 2017.

Watch: Vampire of Hanover: The Butcher Who Carried Out More Than 24 Murders