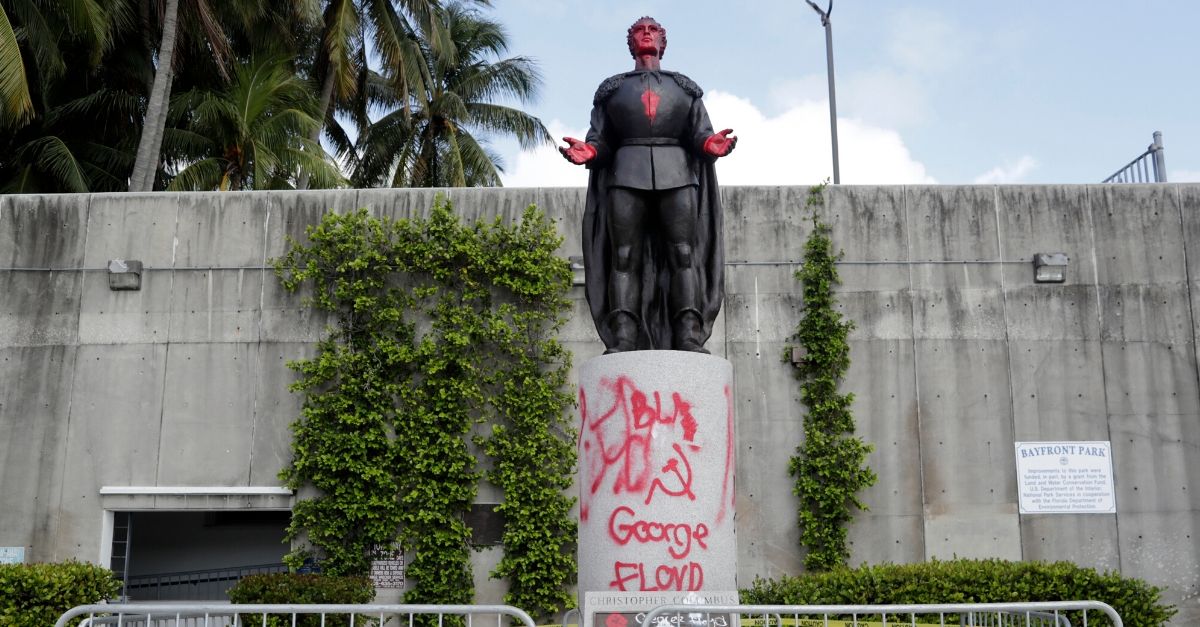 House Speaker Nancy Pelosi is demanding the statues of Confederate figures, such as Jefferson Davis, be removed from the US Capitol. Pelosi told a house-senate committee the confederate statues paid homage to hate, not heritage, and they must be removed. The California Democrat made the announcement on the day President Donald Trump vowed that he would not rename military bases honoring Confederate generals. A short time before Pelosi’s statement, NASCAR announced it would ban the display of the Confederate flag at its races.

Confederate monuments have re-emerged as a national flashpoint since the death of George Floyd, who died after white Minneapolis Police Officer pressed a knee into his neck for 8 minutes. Several protesters decrying racism and police brutality have targeted Confederate monuments in several cities, and some state officials are considering taking them down.

Statue of 18th-century slave trader Robert Milligan was removed in London after anti-racism protests triggered a debate about how Britain commemorates its imperial past. https://t.co/k3Y4dxT7Hr pic.twitter.com/2GcI9sRRH6

Pelosi is also asking to remove the 11 Capitol statues honoring Confederates but is urging the little notice Joint Committee of the Library to vote to remove them. Senate Republicans also shared jurisdiction. Pelosi stated, ?The statues in the Capitol should embody our highest ideals as Americans, expressing who we are and who we aspire to be as a nation. Monuments to men who advocated cruelty and barbarism to achieve such a plainly racist end are a grotesque affront to these ideals.?

Several statues of generals and other figures of the Confederacy in the capital locations such as Statuary Hall, which is the original House Chamber, has been offensive to African American lawmakers for years. Protesters are taking their frustration and anger out on several of these historical statues deemed to undermine the movement, happening all over the world.

Just last week, a Statue of Belgian King Leopold II was defaced in Brussels, one can also see the BLM letters tagged on the statue itself. In Bristol, England the statue of Edward Colston was pushed into the river. Colston was a slave trader in the late 17th century who played a role in the development of the city of Bristol. In London, BLM (Black Lives Matter) was written on the Winston Churchill stare Square.

As far as in the United States, Christopher Columbus statues have been painted with red during recent protests, gaining a fair share of vandalism in public spaces. In Boston, Columbus statue at Waterfront Park was beheaded and has now been scheduled to be removed by the city of Boston. Louisville Kentucky, the John Breckenridge Castleman monument, a statue of a Confederate soldier, was removed. In Jacksonville, Florida, the city took down a 122-year-old statue and plaque that honored fallen Confederate soldiers.

Protesters in Virginia pulled down a Christopher Columbus statue and set it on fire before throwing it in a lake. https://t.co/dpaCG9C8p4 pic.twitter.com/mq5BnfV4xv

Mayor Lenny Curry announced Confederate monuments citywide will be removed in the following days. In Birmingham, Alabama, demonstrations attempted to remove a 115-year-old monument at Linn Park. The park houses memorials dedicated to veterans and has a statue of Confederate sailor Charles Linn. The University of Alabama and The Board of Trustees, as well as the university?s president, authorized the removal of three plaques on-campus that commemorates the University of Alabama students who served in the Confederate army and members of the student cadet cops involved in defending the campus.

In Montgomery, Alabama, demonstrators tore down a statue of Robert E. Lee. In Nashville, Tennessee the statue of Edward Carmack, a former US senator and newspaper owner known for attacking civil rights advocates, was carried away from the city?s Capitol grounds. Protestors had torn the monument down. Crews in old Town Alexandria had removed the bronze statue of Confederate soldiers named ?Appomattox? which was erected in 1889 to honor Confederate soldiers. Mobile, Alabama removed the statue of Confederate Adm. Raphael Semmes and took it to a secure location.