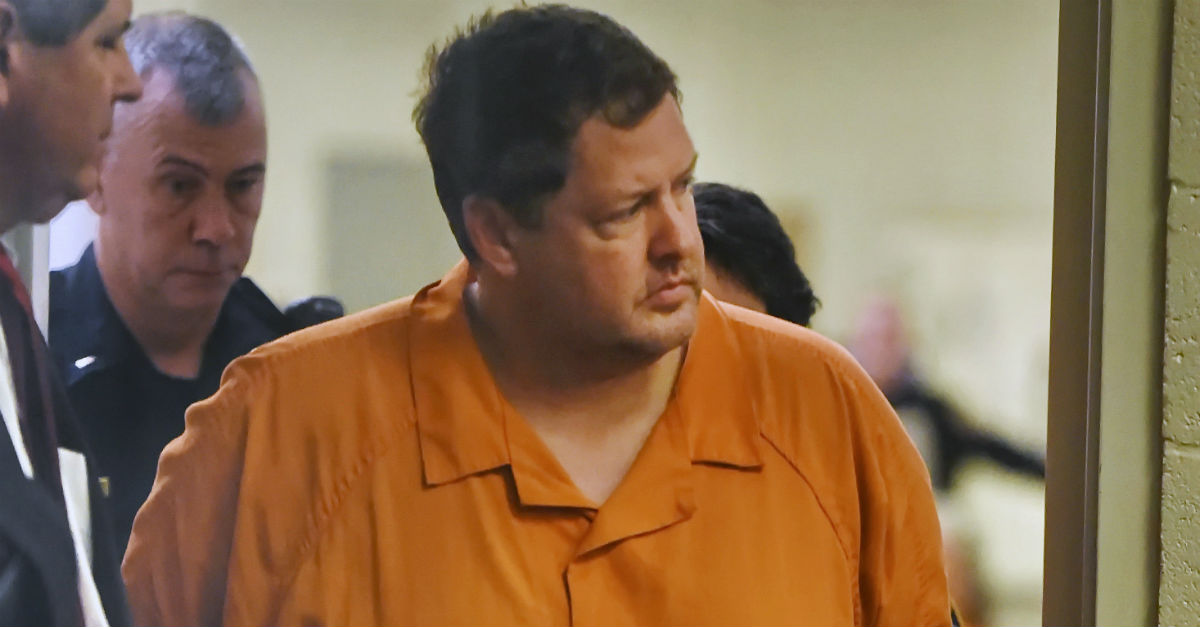 AP Photo/Richard Shiro, File
FILE - In this Sunday, Nov. 6, 2016, file photo, Todd Kohlhepp's enters the courtroom of Judge Jimmy Henson for a bond hearing at the Spartanburg Detention Facility in Spartanburg, S.C. A South Carolina woman who spent two months chained inside a metal container says her captor bragged that he was good at killing people and warned her she could be next if she fought back or ran. Brown and her boyfriend had been missing since Aug. 31, when they went to Kohlhepp's rural property, thinking they were going to clear underbrush. (AP Photo/Richard Shiro, File)

Todd Kohlhepp ran a successful real estate business for a number of years, but his public image was altered drastically after he was convicted for the murders of at least seven people.

It was reported over the weekend that the serial killer admitted to having more victims.

“Yes there is more than seven,” he wrote in an eight-page letter to the Herald-Journal of Spartanburg, S.C., in November. “I tried to tell investigators, and I did tell FBI, but it was blown off. It’s not an addition problem, it’s an multiplication problem. Leaves the state and leaves the country. Thank you private pilot’s license.”

Kohlhepp unfortunately added, “At this point, I really don’t see reason to give numbers or locations.”

The FBI has stated that it has a pending investigation, but did not release specifics.

One of Kohlhepp’s victims, Kala Brown, was found “chained like a dog” inside of a shipping container on his property in Spartanburg.

Kohlhepp, a registered sex offender, raped and kept Brown locked in the shipping container for two months before she was found by authorities. He also shot and killed her boyfriend, Charles Carver, the last of his seven known victims. Her story appeared on CBS crime show “48 Hours.”

A video of her rescue from the shipping container was also made available.

Kohlhepp’s other known murders include four employees at a motorcycle store in 2003, where he shot and killed, execution style, 30-year-old store owner Scott Ponder, Ponder’s 52-year-old mother Beverly Guy, 30-year-old service manager Brian Lucas and 26-year-old mechanic Chris Sherbert. Kohlhepp said he killed them out of his anger with the manager.

Kohlhepp also killed a couple — 29-year-old Johnny Joe Coxie and 26-year-old Meagan Leigh McCraw-Coxie — in December 2015. The search for the missing couple led authorities to find Brown. Their bodies were also discovered on his property in Spartanburg.

In May, Kohlhepp pleaded guilty to killing at least seven people in the state of South Carolina over the span of 13 years. He is serving seven consecutive life sentences in prison for the deaths along with 60 years for other charges related to the murders, including kidnapping and sexual assault.

Over 50 family members of the seven killed were in the courtroom as Kohlhepp made his plea. It was said that a sheriff and the families of the victims were overcome with emotion in court.

Brown did not attend but expressed support for the plea deal that Kohlhepp took to avoid the death penalty. She said that another death would not bring her satisfaction.

“As [Brown] said in one of her first meetings with the solicitor — he’s the killer, not me,” reported attorney Alex Stalvey.

At the age of 15, Kohlhepp raped a 14-year-old that he had a crush on. In 1987, his probation officer described him as an angry individual who felt that the world owed him something. He also referred to Kohlhepp as the type of individual “with little or no conscience.”

Kohlhepp was released from prison in 2001 following the conviction.

RELATED: The parents of the suspected Tampa Bay serial killer are now headed to court themselves