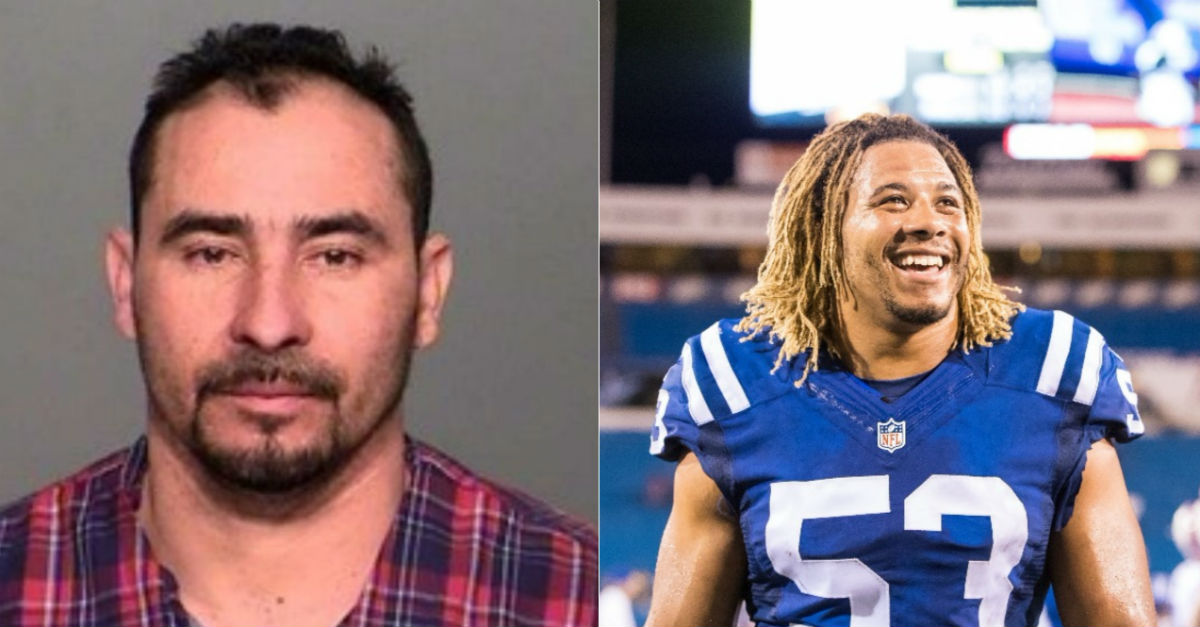 The driver who police believe is responsible for the death of Indianapolis Colts linebacker Edwin Jackson, 26, has been identified.

Jackson was killed on Sunday morning when he and 54-year-old Jeffrey Monroe, who also died in the incident, were having a conversation near a stopped vehicle. A driver suspected of being under the influence struck the men after driving his pickup truck over the emergency shoulder.

The man behind the wheel was discovered to be Manuel Orrego-Savala, 37, according to the Indiana State police, reports the Indy Star. When authorities first detained Orrego-Savala, they say he gave them the fake name Alex Cabrera Gonsales. Orrego-Savala did not have a driver’s license, as he is a Guatemalan citizen. He had reportedly been deported twice before, once in 2007 and once in 2009.

More information about the events leading up to the collision was also released by authorities.

Monroe was an Uber driver who was believed to have pulled over and gotten out of the car when he noticed Jackson becoming ill. The ride-sharing service later confirmed Monroe’s employment.

He was assisting Jackson when the men were hit. Indiana State Trooper Ty Mays was driving through the area when he spotted the crash. As he slowed down to respond, he struck the body of one of the victims, which had been thrown to center lane of the highway after the initial impact. Orrego-Savala reportedly attempted to flee the scene on foot but was apprehended by Mays.

Jackson’s team released a statement following the news of his death:

We were heartbroken to hear the news of Edwin Jackson?s passing. Edwin was loved by all in the Colts organization. We admired his outgoing personality, competitive spirit and hard-working mentality. He was well-respected among all with whom he crossed paths, and he will be greatly missed in our locker room and throughout our entire organization. We also understand that another person lost his life in the accident, only adding to our sorrow on this day. We are shocked and saddened by this tragedy, and our thoughts and prayers are with the families of both men during this difficult time.

It is with a heavy heart that we share the loss of one of our own.

Edwin Jackson always brought a smile to our locker room and the community. Our thoughts are with his family and friends during this difficult time.

RELATED: A golfer is off the green after allegedly getting a teen drunk for an evil purpose