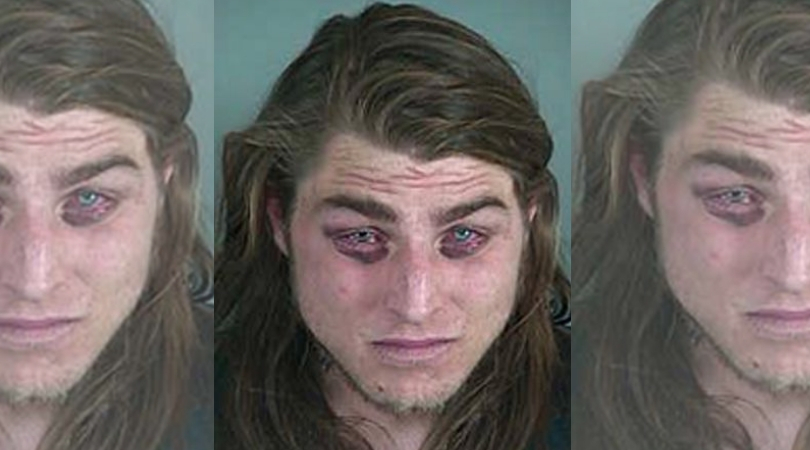 A baby physically shot across the bedroom after an alleged drunk driver crashed his SUV through a wall smashing into the cradle of a 3-year-old boy who was sleeping. The child was miraculously unharmed. According to authorities, Tyler Cole Eiman crashed his Nissan Pathfinder, quickly fleeing on foot after hitting the Eugene Oregon residence.

Authorities cited alcohol as a possible factor in the incident and were able to catch the 27-year-old driver and took him to a nearby hospital for minor injuries. The award-winning mugshot of Eiman tells the story itself, as he appears to show two black eyes and a, let’s call it…” worn out look.” He was reportedly arrested after receiving treatment and booked on charges with DUI, criminal mischief 2nd degree, second-degree assault, reckless driving, hit and run, and six counts of reckless endangerment.

Eiman crashed his SUV around 8 p.m. which just makes me believe he might have enjoyed Happy Hour a little bit too much. They were said to be two passengers in the man’s vehicle at the time of the crash, one of whom also suffered minor injuries. The vehicle allegedly lost control and skidded over a curb, through the yard and into the bedroom of the apartment.

This man must have had the hangover of hell. Just look at that mugshot, it tells the story itself! Guys, this is really simple, things like these can easily be avoided. There are so many apps nowadays, that drive you places if you are too drunk to drive. Have fun, drink you tequila shots, but don’t drive while intoxicated! It’s stupid, and you’re stupid if you do it! This could have ended terribly.