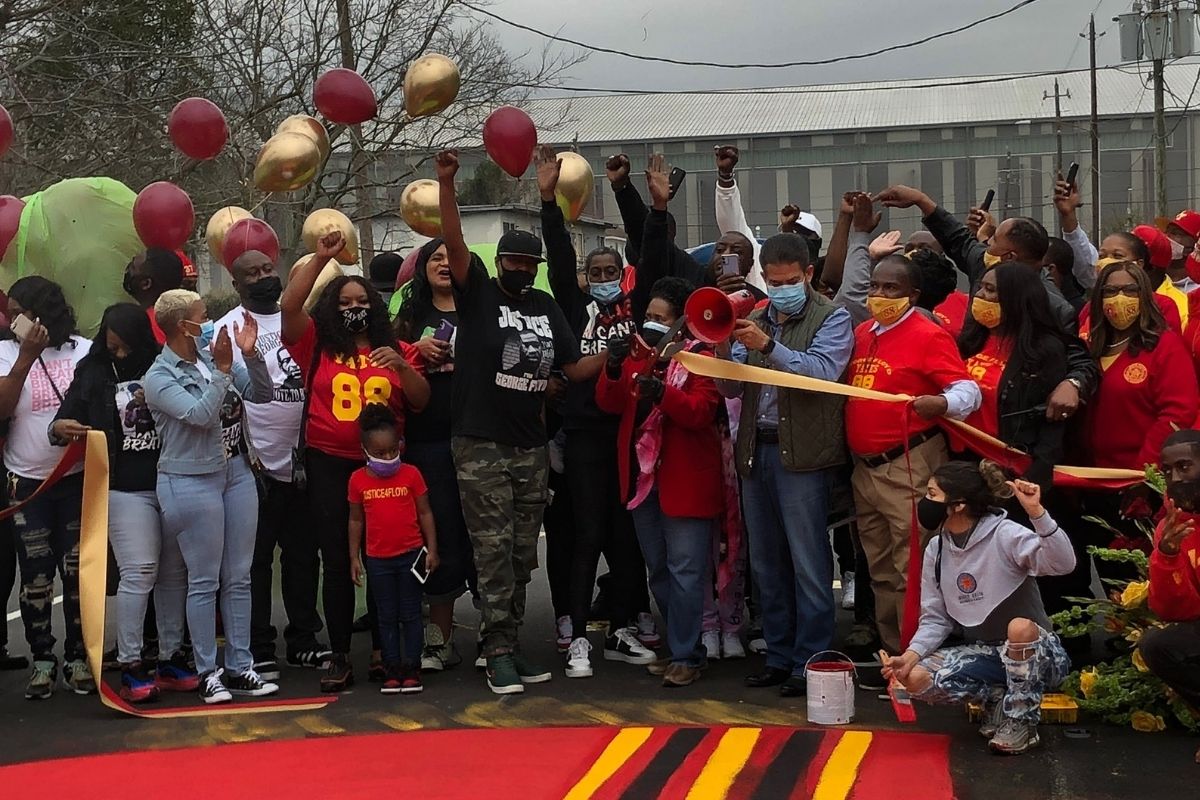 A mural was unveiled in front of a Houston High School in memory of George Floyd, who is one of its former students. The mural was dedicated to Floyd reading, ‘Black Lives Matter? in bright gold and red paint and spans two blocks in front of Jack Yates High School. Artist Jonah Elijah created the mural along with several volunteers who attended the unveiling in the company of Floyd’s family members.

Floyd?s niece Bianca Williams spoke about the mural, stating, ?This means so much to my family and I know it would mean a lot to my uncle. Continue to stand with us. This is the beginning of a long fight, united together, stronger than ever.? The mural also features the red and gold No.88 football jersey Floyd wore as a player on the High School football team.

The street mural was commissioned by Harris County Commissioner Rodney Ellis, along with the Houston Society for Change and the nonprofit minority advocacy group 88 C.H.U.M.P. The ceremony also featured a special appearance by congresswoman Sheila Jackson Lee, who then presented the Floyd family with the George Floyd Justice in Policing Act. The legislation is set to focus on Justice training police officers and aims to provide money to communities to reimagine polishing.

46-year-old Floyd, who was African American, was killed back on May 25, 2020, during an arrest in Minneapolis. Minneapolis police officer Derek Chauvin kneeled on Floyd’s neck for nearly 10 minutes. The tragic event was captured on video by witnesses and quickly went viral on social media causing chaos worldwide. The video showed Floyd repeatedly crying out “I can’t breathe” until he went unconscious. He was pronounced dead at the hospital. This led to sweeping calls for social justice throughout the rest of the year.

Chauvin and three other law enforcement officers were fired from the police department and are all facing charges related to second-degree murder and manslaughter. Their trial is now scheduled for March 2021. Around the United States, several murals have been coming up memorizing Floyd, including one in Houston and in Minneapolis.

A mural featuring Floyd’s face, alongside Breonna Taylor, over a burning city, was painted by artist Chris Rogers in Austin, Texas, which he stated is meant to symbolize not only Justice with police violence but problems with the way the United States is operating and has been operating. Several other murals in honor of George Floyd and in support of the Black Lives Matter Movement have been created around the world in cities such as Berlin, Belfast, Manchester, Gaza City, Syria, and Idlib.