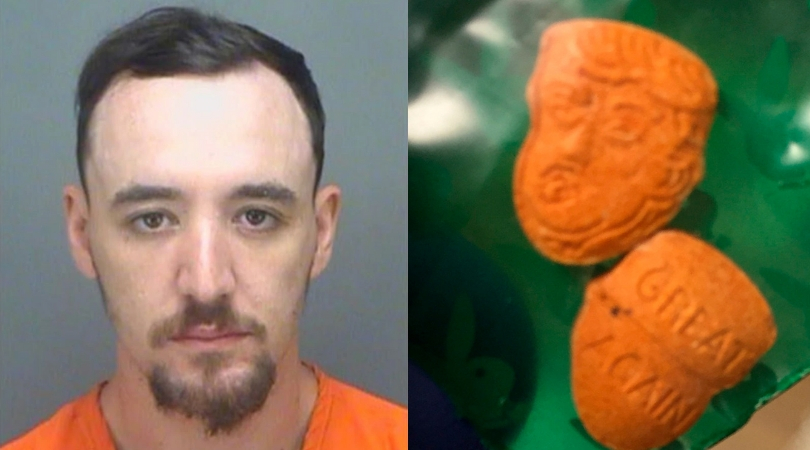 Either this man is President Donald Trump’s number one supporter, or he absolutely hates him so much that he wants to forget about him by drugging himself up while pretending to eat him. Whichever one it is, this is hilarious. 23-year-old Brendan Dolan King was arrested after police found orange-colored ecstasy pills inside the air vent of his home.

Pinellas County Sheriff’s officers stated the pills were labeled “Trump NL” and had “Great Again” on the back. Authorities answered to a call about a drug overdose at Dolan-King’s home, who has since been charged with possession of a controlled substance, because duh. Police also said they found a tan powder in his air vents that later tested positive for fentanyl and the tablets in the shape of Trump’s head were also tainted with MDMA.

MAGA one pill at a time.

Now, I don’t know what ecstasy does to you, because my little innocent heart is too much of a chicken to find out, but does it age you? Because this man DOES NOT look 23, he looks at least 35! Just look at his face, it’s ridiculous. Still, props for being creative and making the best out of your situation by trying to pretend you’re not doing drugs, rather than vitamins.

Surprisingly enough, there have been other instances where ecstasy pills were found to have Trump?s image. Back in 2017, German police found over 5,000 ecstasy tablets after pulling over a suspicious vehicle. The pills were also orange and were in shape of the presidents face with ?Trump? on the back. Last year, Indiana State Police also seized similar orange pills that were stamped with President Trump’s face and the words, “Great Again,” a reference to Trump’s overused “Make American Great Again” campaign slogan.

Drug dealers are getting way too creative nowadays.