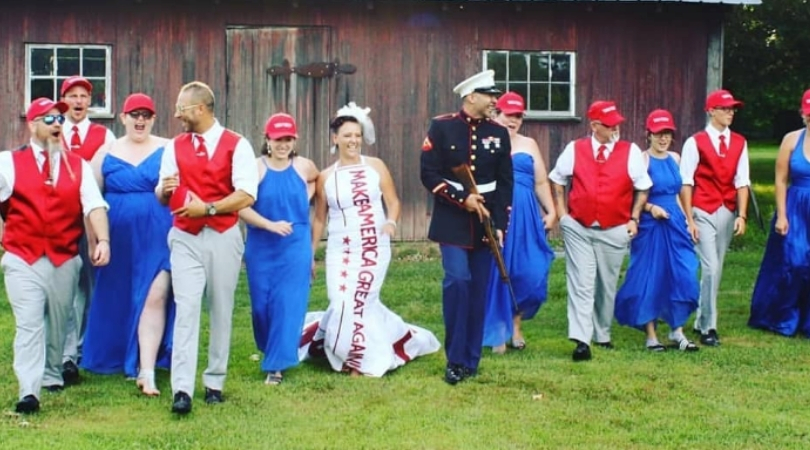 You know those people who say they live, breathe, and eat for their country? So much so that it starts to scare you, because it’s just a little bit too much? Well, meet Audra and Jeff Johnsons. The most American-Americans you will probably see this year. Safe to say subtle wasn’t the intention of the wedding decor for the couple, who married on July 4th in Kalamazoo with a full-on MAGA themed wedding.

Yes, you read that right. It literally looked like it was one of President Trump’s rallies. The guests, who were all wearing “Make America Great Again” hats, surrounded the love birds taking in the awe of their American themed party. According to the bride, in addition to celebrating their love for one another, she and her husband decided to use their wedding day to also celebrate President Donald Trump. And well, no detail was overlooked.

The bride’s Trump-themed dress had “Make America Great Again” printed across it, each groomsman had “don’t read on me” cuffs, and each reception table had a petition for anti-abortion “heartbeat bill.” Now, I know I can’t be the only one thinking this is a bit too much right? I don’t care if you’re a Democrat or a Republican, that’s your choice of course.

But, the last thing I want to do at a wedding is talk politics and why I think abortions should be legal. Can you imagine all the fights that are going to start when someone ends up having one too many glasses of champagne? It’s definitely a bold move. But hey, not my wedding, right?

Audra, whose nails were painted to look like the American flag, stated her dress was an Andre Soriano original and was made out of a MAGA flag. And before you ask, yes, of course, the dress stole the show. Soriano is known for his “Trump gowns” which he has designed for celebrities and those attending Grammy red carpets.

Despite the Republican theme, the couple stated all their friends and families were welcome no matter what political party they followed. This included her lifelong friend and maid of honor, who is a Democrat, and respected their theme but refused to wear MAGA hats for pictures. Which is understandable, but at least she attended. Unlike the groom’s father who refused to attend the ‘MAGA’ wedding because of their political stance.

I can’t wait for their gender reveal parties. I just hope they get invited to the White House because of this or at least get a tweet from Trump. They say love will make you do crazy things. This sure proves that statement, hands own.

Editors note: This article was originally published on July 11, 2019.