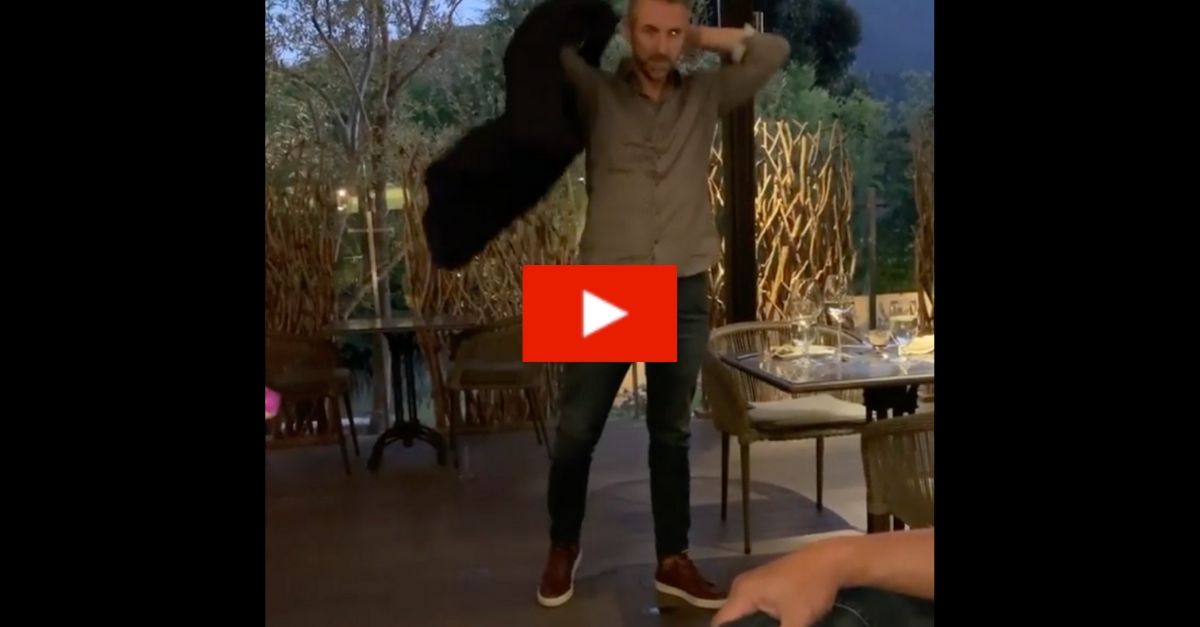 This tech CEO really nailed the timing to release his inner racist when he decided to disturb this Asian family at a California restaurant in Carmel Valley near Monterey, California, during the 4th of July weekend. Michael Lofthouse, the CEO of San Francisco tech company Solid8, just about ruined his reputation forever, after his disgusting racist remarks were caught on a video that went trending.

Raymond Orosa was enjoying a nice dinner with his family at the Lucia restaurant at the Bernardus Lodge and Spa when the CEO of Solid8 decided he needed to rudely interrupt their time, even with no provocation. Not that racism is ever justified by provocation. Orosa’s niece, Jordan Chan, not only caught Lofthouse’s racist slurs on video, but also a Lucia employee quickly coming to the family’s defense.

❗️❗️❗️SHARE THIS POST❗️❗️❗️ Trigger warning: Racism, Vulgar Language (FYI he had a LOT more to say after I stopped recording) This is the face of the man who relentlessly harassed my family and I completely UNPROVOKED, UNWARRANTED, and UNCONSCIONABLE. We were celebrating my tita’s birthday, literally just singing happy birthday to her and taking pictures, when this white supremacist starts yelling disgusting racist remarks at us. (“Fuck you Asians” “Go back to whatever fucking Asian country you’re from” “You don’t belong here”) It is no coincidence that this man has the audacity to showcase such blatant racism on the 4th of July. White supremacy has a notorious habit of masquerading as patriotism! The fact that Donald Trump is our president (i.e. THE MOST POWERFUL MAN IN THE WORLD) gives racists a platform and amplifies voices of hate. The surfacing of racists is so prevalent right now, even in such an ethnically/culturally diverse and liberal state like California, because Trump HIMSELF uses his position to incite racial tension and to promote aggression towards POC, foreigners, and immigrants. We need change! PLEASE PLEASE PLEASE VOTE THIS UPCOMING RE-ELECTION. PROTECT ALL PEOPLE REGARDLESS OF SKIN COLOR AND ETHNIC ORIGIN. ✊🏻✊🏼✊🏽✊🏾✊🏿

The Solid8 CEO had already made comments before Jordan started recording, but could no longer hide his true horrible side by flipping the family off and making more racist comments. “Trump’s gonna f*ck you,” he says after flipping them off, and then continues with, “You f*ckers need to leave,” trying to save his own idiocy after a Lucia employee kicked him out.

“Get out, you are not allowed here. You do not talk to our guests like that. They are valued guests. Get out,” said the Lucia employee. But Lofthouse didn’t stop there with his racist rant. For his grand finale, he added, “You f*cking Asian piece of sh*t,” as he’s puting his suit jacket on. He argues with the Lucia employee a little more as she continues to firmly explain that he’s never allowed in the restaurant again.

Orosa told ABC7 that he and his wife have been in the United States for almost 26 years, and that they’ve never encountered anything remotely racist until their encounter with Lofthouse, who I’d like to mention, also has an accent that probably means he’s probably from another country. “I can’t say what he did was acceptable or right, it isn’t, because a lot of people will probably disagree with me for saying I forgive him… but I do,” Orosa said with pure honesty.

When Jordan took to social media and made an Instagram post of what happened, Lofthouse’s true nature was exposed, resulting in him writing a statement of apology, “My behavior in the video is appalling. This was clearly a moment where I lost control and made incredibly hurtful and divisive comments. I would like to deeply apologize to the Chan family. I can only imagine the stress and pain they feel. I was taught to respect people of all races, and I will take the time to reflect on my actions and work to better understand the inequality that so many of those around me face every day.”

Orosa told ABC7 how he really feels about the half-assed apology, saying, “He’s just saving face. I think he really meant what he said and what he did. I don’t believe his words because his actions speak louder than the words he’s saying.”

The vice president and general manager of Bernardus Lodge and Spa, Sean Damery, also wrote in an emailed statement, “This is an extremely unfortunate situation, however we are proud of our staff at Lucia in keeping with Bernardus Lodge’s core values; this incident was handled swiftly and the diner was escorted off property without further escalation. We provide guests with a safe environment for lodging and dining, and extend our sincere apologies to the guests enjoying a birthday celebration on a holiday weekend.”

As an Asian woman, this breaks my heart honing too close to home. I was born in the United States, and my parents have also been here for over 30 years. What’s crazy is after more research, I found out that this family also shares the same Filipino heritage as I do. To relate in not experiencing anything even close to racism until recently just shows what kind of times we’re currently in.

Watch: Iowa Driver Runs Over 14-Year-Old ‘Because She Was Mexican’