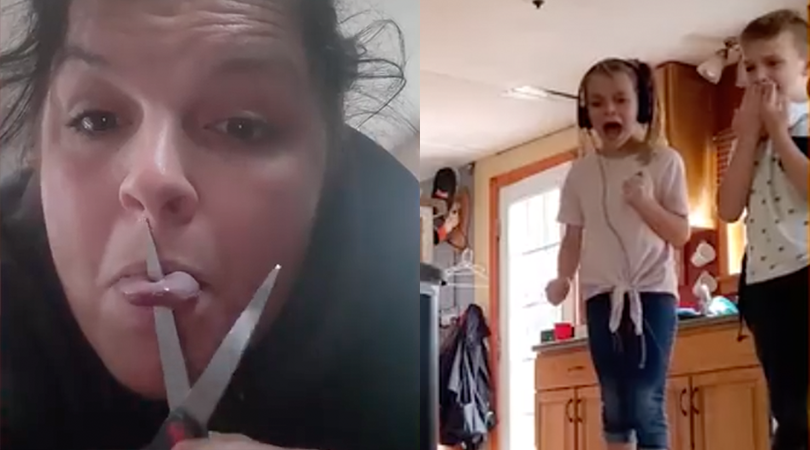 A mom from Arkport, New York, with a sense of humor that her children can pretty much literally not handle played a Halloween prank so devastatingly traumatic and hilarious that it had her little, adorable daughter shrieking “F*CK YOU” at her through tears and convulsions while her son simply wept next to her.

The mom, who apparently at some point was struck with the completely understandable notion that “Hey I should mess with my kids,” procured a pair of scissors through fake tongue prank, putting it in her mouth so that she would appear to have suffered some horrific and inexplicable accident. Then she laid down on the floor next to a bunch of coupons (nice touch) and waited for her kids to come home from school. When her son walked in she started to moan for help, acting unable to speak in order to sell the ruse. At first the son was confused but as soon as he saw exactly what was going on he immediately broke down into panicked tears.

The daughter walked into the kitchen moments later and saw her brother frozen in terror, wailing at the sight of, for all he knew, their grievously injured mother. She quickly inspected the situation and, as soon as she thought she realized what as happening, she also quickly devolved into a screaming, crying wreck.

Check out the fun from the New York Post!

This was pretty much perfect. My only note would have been fake blood. Lots of fake blood. That kitchen has a tile floor. Would’ve been easy to clean and maybe you could’ve gotten your kids to pee their pants. But, really, that’s nitpicking. This was perfect. And, again, the daugther screaming “F*CK YOU” in the viral video at the top of her lungs was the funniest thing I’ve seen in weeks.

Nicely done, mom. Mom pranks for the win when you get the kids to scream like they’re in a haunted house.

Editor’s note: This article was originally published on October 18, 2019