Trump saber-rattles at North Korea, as the hermit kingdom warns of an “abyss of doom” 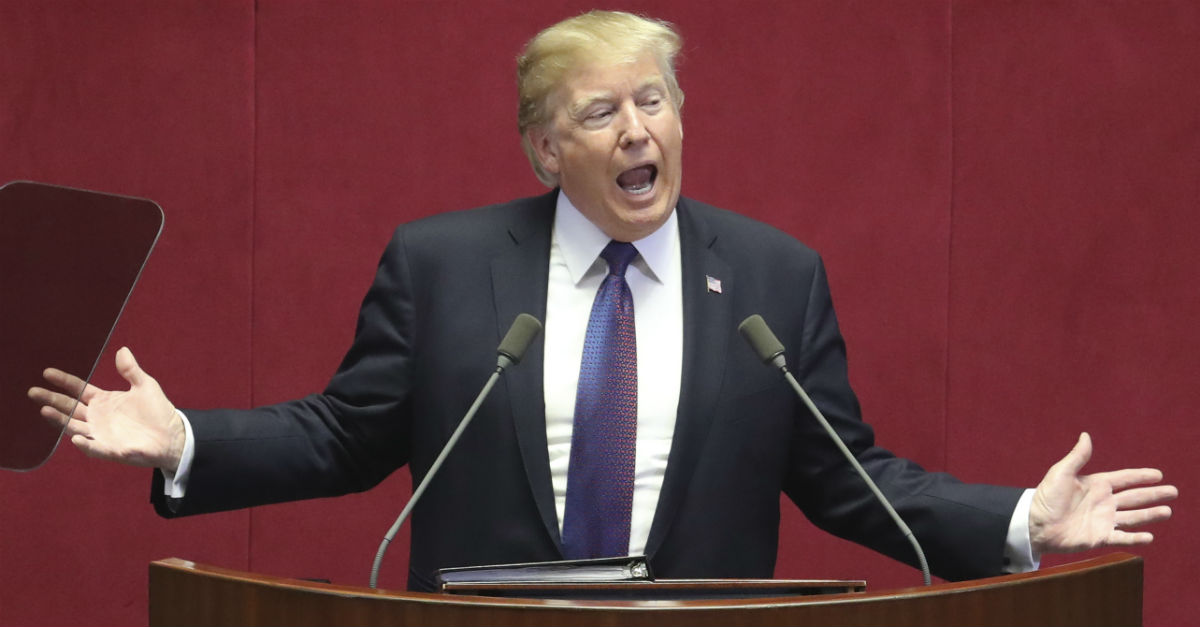 North Korea warned of an “abyss of doom” after President Trump gave a fiery speech to South Korean diplomats, only 120 miles away from Pyongyang, warning Kim Jong-un and his regime, “This is a very different administration than the United States has had in the past. … Do not underestimate us. And do not try us.”

In response North Korea’s state-run news agency said on Wednesday, “The U.S. must oust the lunatic old man from power and withdraw the hostile policy towards [North Korea] at once in order to get rid of the abyss of doom.” They added, “The U.S. had better make a decisive choice … if it does not want a horrible nuclear disaster and tragic doom,” Fox reports.

During his speech to South Korea’s National Assembly, President Trump mostly stayed with the teleprompter and didn’t employ the “Rocket Man” moniker that he’s attached to Kim Jong-un. Instead, he gave a serious and measured address, at times speaking directly to the dictator in the north; he remarked, “North Korea is not the paradise your grandfather envisioned. It is a hell that no person deserves.”

Trump also dedicated a portion of his speech to addressing the human rights abuses in the DPRK, describing the nation as a “cult” and touching on reports of slave-labor in its work camps. North Korean escapees in the audience told The Washington Post that they were very happy with the remarks, with one saying, “We just don’t hear people talking about North Korea in this way in South Korea, so I was very emotional during the speech. I was very impressed.”

The address to the South Koreans follows Trump’s remarks on Monday in Japan, in which he declared, “The era of strategic patience is over.” He continued, “Some people said that my rhetoric is very strong, but look what’s happened with very weak rhetoric over the last 25 years. Look where we are now.”

But the president’s visit to the peninsula also bore a change in his rhetoric — during a press conference with South Korean President Moon Jae-in, Trump urged the North Koreans to “come to the table,” saying they ought to “do the right thing, not only the right thing for North Korea but for humanity all over the world.”

The escalating rhetoric between Trump and Kim has lead to a lot of saber rattling. The North Koreans have reportedly tested their nuclear weapons so much that the mountain where they carry out experiments is on the verge of collapsing. In anticipation for Trump’s Asian visit, the Navy tent a trio of aircraft carriers to the Western Pacific.

But a military solution may not be necessary. North Korean defectors say that citizens inside the nation may be starting to realize the brutality of their daily lives. Last week a former top administration official told Congress that “great and unexpected changes are taking place in North Korea,” and that the changes could make a civilian uprising possible.