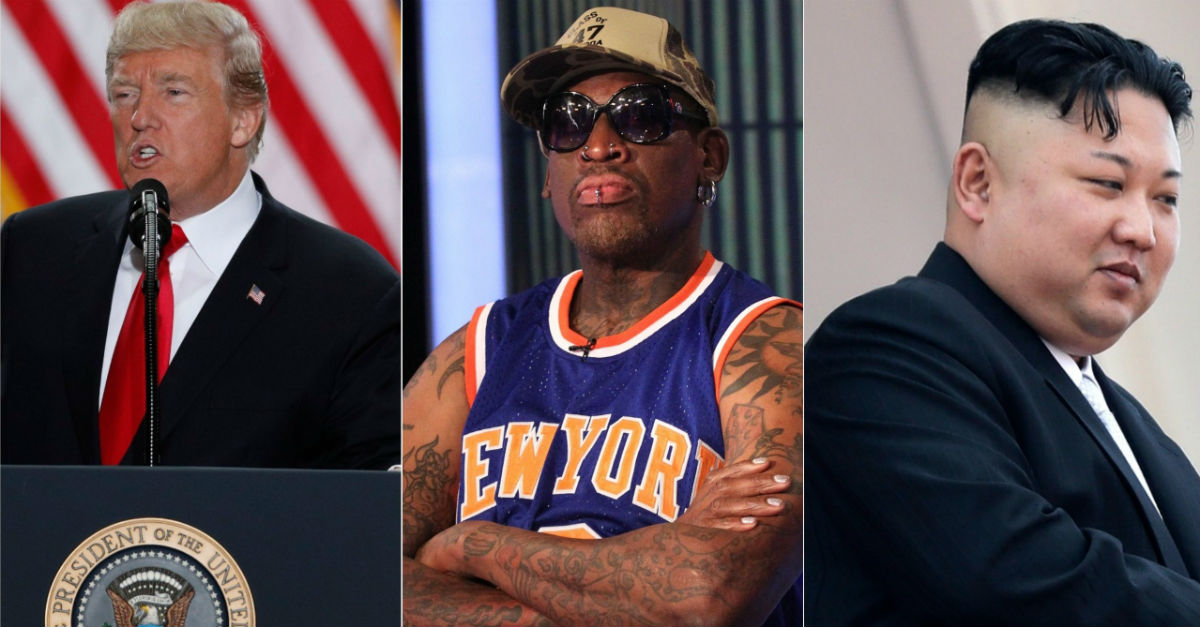 Rodman and the North Korean dictator have enjoyed an interesting relationship thanks to a mutual interest: basketball. According to the Washington Post, Rodman has indicated that he wanted to use the sport to bridge the gap between both the world leaders and their countries. Rodman has even explored organizing a basketball game between North Korea and Guam, a United States territory.

“If I can go back over there?you?ll see me talking to him, and sitting down and having dinner, a glass of wine, laughing and doing my thing,” he explained.

Rodman also added that he knew what Kim Jong-un wanted, though he did not specify.

If his desires are met, it wouldn’t be Rodman’s first self-appointed diplomatic trip to the country. He’s taken a number of trips since 2013 to tour the country and hang out with Kim Jong-un on several occasions.

“We laugh, we sing karaoke, we do a lot of cool things together. We ride horses, we hand out, we go skiing,” he once admitted in an interview.

Rodman even gifted Korean Sports Minister Kim Il Guk a copy of Trump?s book, ?Trump: The Art of the Deal,? on trip to the country over the summer. Rodman stated his belief that Trump would be supportive of the trip.

As for his time with Trump, Rodman called him a “great friend for many years” in 2015 when he became one of the earliest supporters of his presidential bid.

@realDonaldTrump has been a great friend for many years. We don't need another politician, we need a businessman like Mr. Trump! Trump 2016

Though Rodman’s communication with both men appears to be positive on the surface, the relationship between the world leaders is quite strained. The two feuded rather publicly last month when Kim Jong-un called Trump an “old lunatic.” Trump responded by insinuating that the dictator was ?short and fat.? Trump’s previous insults included calling him “Rocket Man” on Twitter.

He also declared that the United States? policy of ?strategic patience? on North Korea was ?over” in a joint press conference with Japanese Prime Minister Shinz? Abe.

Since that time, Trump classified North Korea as a state sponsor of terror in a press conference.

Pres. Trump​ designates North Korea a state sponsor of terror: "Should have happened a long time ago." https://t.co/NkJuIoyFEp pic.twitter.com/1cpmoaHHYP

He cited support for “acts of international terrorism including assassinations on foreign soil” and the death of 22-year-old University of Virginia student Otto Warmbier, who died in June after spending a year and a half in a North Korean prison. He returned to the United States in a comatose state.

Warmbier’s death lead to the barring of United States citizens from traveling to the country, beginning in September.

?Countries determined by the Secretary of State to have repeatedly provided support for acts of international terrorism are designated pursuant to three laws: section 6(j) of the Export Administration Act, section 40 of the Arms Export Control Act, and section 620A of the Foreign Assistance Act,? the department explains on their website. Countries that fall under those designations may face certain sanctions, which include ?restrictions on U.S. foreign assistance; a ban on defense exports and sales; certain controls over exports of dual use items; and miscellaneous financial and other restrictions.?

Any person or country that trades with those listed by the department may also face penalties by way of sanctions.

Trump also imposed “major sanctions” on the country a few weeks later after North Korea boasted an inter-continental ballistic missile (ICBM) launch that “?higher [?] than any previous shot they?ve taken,” according to Defense Secretary James Mattis. Physicist David Wright said that it had “more than enough range to reach Washington, D.C., and in fact any part of the continental United States.”

The U.S. Department of Defense has since stated that the missile could not threaten the United States, its territories, or its allies.

RELATED: North Korea issues their strongest words yet about war with the U.S.