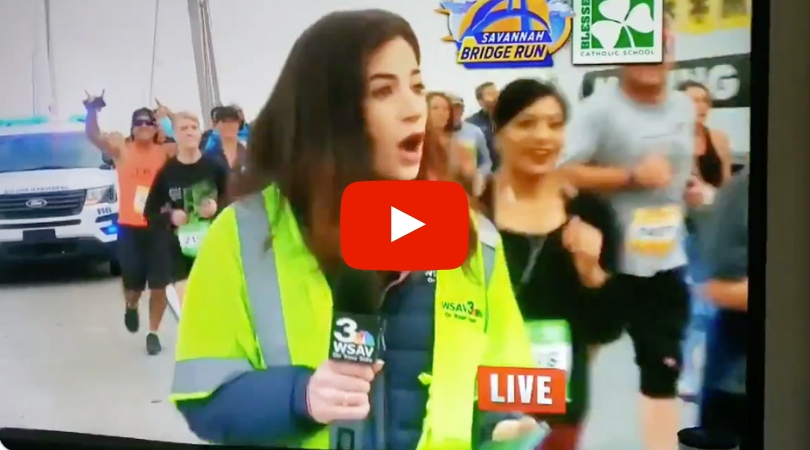 A news reporter in Georgia was physically groped on live TV while covering a 5K race. Authorities are investigating the case as a sexual battery report. WSAV-TV reporter Alex Bozarjian told police the man ran up from behind and slapped and grabbed her buttock while doing a live broadcast of the annual Enmarket Savannah Bridge Run.

Expressing her thoughts of the incident on Twitter, Bozarjian said she was violated, objectified, and embarrassed. She then told the Savannah Police Department she wants to pursue criminal charges. Which honestly, I don’t blame her. This woman was doing her job, and someone decided to sexually harass her on LIVE TELEVISION. Can you imagine watching your sister, girlfriend, wife, or daughter go through this? After watching the video, this woman’s reaction is what made my heart sink. I felt so much rage just seeing her in a state of shock, but forced to continue to act as if nothing happened. No one should ever go through this, man or woman.

To the man who smacked my butt on live TV this morning: You violated, objectified, and embarrassed me. No woman should EVER have to put up with this at work or anywhere!! Do better. https://t.co/PRLXkBY5hn

According to a police report, a suspect from the south Georgia city of Statesboro has been identified as Tommy Callaway, but no charges have been filed. He was officially banned from any future Savannah Sports Council races. Callaway is reportedly a local Minister for Youth Affairs and the leady of the Boy Scouts.

The female reporter spoke with CBS This Morning, stating, “He took my power, and I’m trying to take that back, I think what it really comes down to is that he helped himself to a part of my body. I would say the reason why maybe it caught so much fire is that the emotion is extremely relatable for women all over the world.”

"It's not okay to help yourself to a woman's body just because you feel like it… in order to make any kind of change, you have to be a little bit drastic. And you have to… chip away at this toxic culture that permeates our society." — @WSAVAlexB pic.twitter.com/tYsvu0uFiW

Through a statement, Callaway’s lawyer responded to the situation, saying he regrets the situation, and did not act with any criminal intentions. He noted, “Tommy is a loving husband and father who is very active in his community.” Which put my two cents here, doesn’t mean anything. It’s about respect, Tommy, your wife must be so proud after this.

Still, Bozarjian said Callaway did make contact with Savannah station WSAV-TV, saying his intentions were not to hurt her, but Bozarjian stated she wasn’t going to debate his comment since he did indeed hurt her.

Can you blame her?