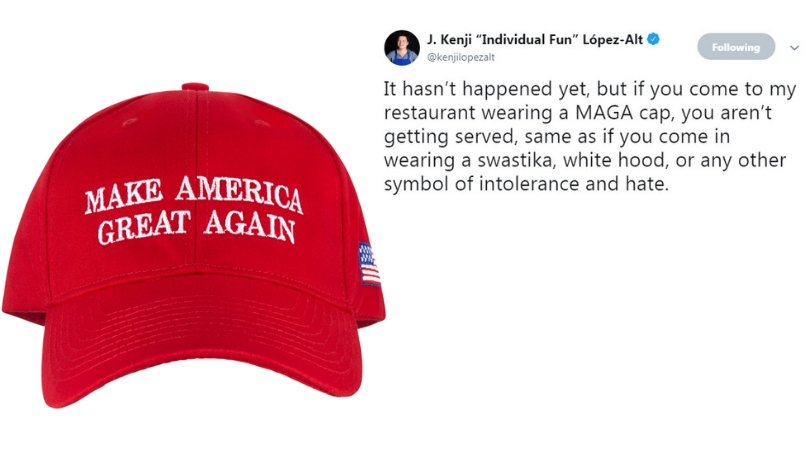 It looks like Californians won?t be able to wear their ?Make America Great Again? hats anymore if they want to eat. A restaurant owner in San Mateo California tweeted that he views the ‘MAGA hat’ as a symbol of intolerance and hate, which is why he will not let people inside his restaurant if they are wearing one. J. Kenji Lopez-Alt, a chef-partner of the Wursthalle restaurant, took to Twitter (not the best idea) to say if anyone is seen wearing a ‘MAGA’ hat at his restaurant, they will not get served.

Lopez-Alt compared the hat to a swastika and a white hood, saying it was a symbol of intolerance and hate. Safe to say the tweet was quickly taken down, due to the amount of hate he was receiving from several Twitter followers. Because well, he opened a big door for hate and criticism. Of course, he later did apologize saying all customers will be served, but still, bold move.

I mean, it?s no secret that the red hats, which are sold on President Donald Trump’s campaign website, have become quite polarizing. Just this month, several Kentucky High School students who were wearing a hat were involved in a confrontation with a Native American elder near the Lincoln Memorial, which caused chaos among the nation. So, yeah, they have indeed become more than a cultural symbol, going beyond political disagreements.

If you’re comfortable sitting next to a MAGA wearer I’m probably not interested in serving you either.

If I?m being completely honest, (don’t chop my head for this) I actually get his point. Putting aside all politics, it has kind of become a symbol of hate. Whether you are for Trump or against Trump. Think about it. The hat creates an outlet for those who are in favor of Trump, and see it as an ?I?m better than you because I support our president? type of deal. While those who are opposed to Trump, see it as a weapon of hate. No one wins in this scenario, despite what they believe or their different political views.

The hat no longer represents a neutral symbol regardless if Trump is our President or not. Whenever someone wears a hat, they are making it easy to bring in assumptions, which is a resistance to diversity and equality. Honestly, those hats just need to go. They need to stop existing because they are creating unnecessary problems that the world doesn’t need.  All this shitty back and forth and fighting isn’t even giving justice to the slogan. You aren’t ‘making America great again’ if you keep acting like animals. It?s just a fucking baseball cap. That’s it.

Maybe that’s what that hat should say instead of MAGA…”It?s Just a Fucking Hat?. Yeah, I’d buy it.