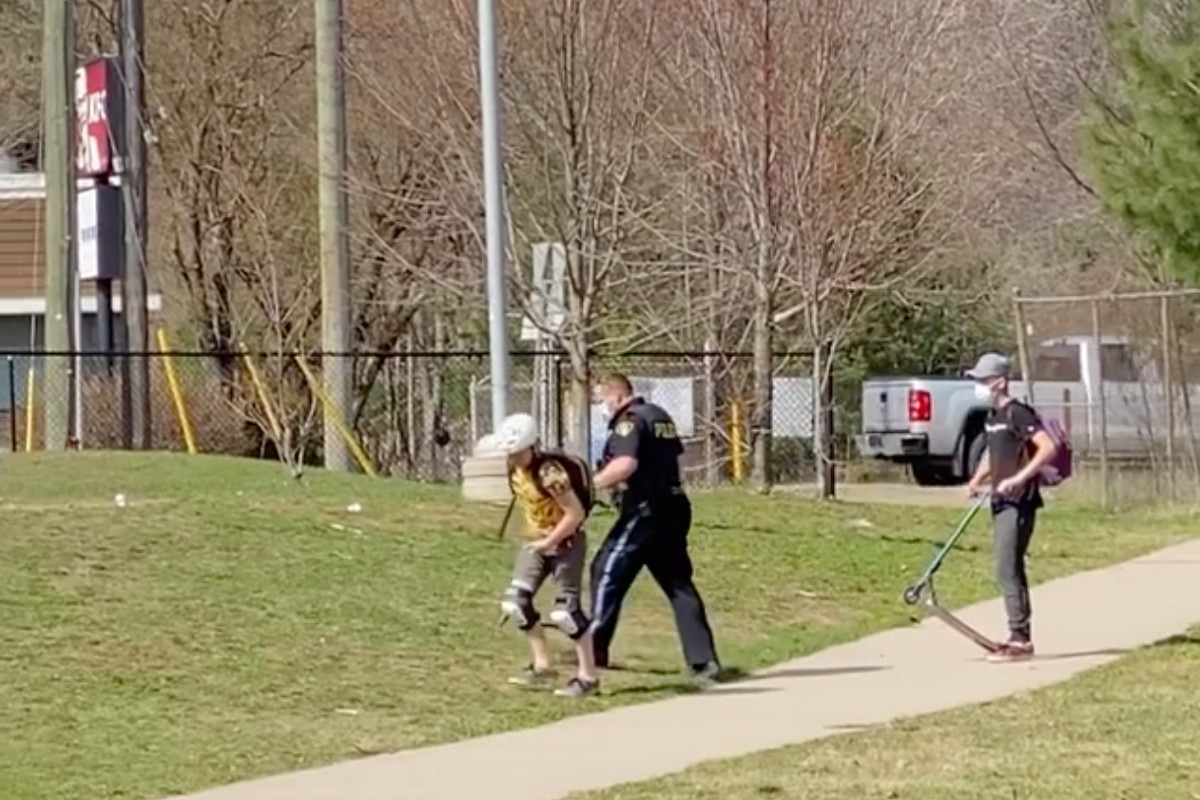 Amid grim COVID forecasts and tightening public-health restrictions in Ontario, Canada, a police crackdown on outdoor activities prompted a physical altercation with a purported lockdown violator. The suspect? A twelve-year-old kid on a scooter.

In a video posted to social media on Monday, an Ontario Provincial Police officer is seen shoving the young rider to the ground at a skatepark in Gravenhurst, Ont., a town two hours north of Toronto.

In the minute-long video, a couple of kids scoot past the camera, alerting the filmer, “They’re asking for IDs”. In the distance, you can see two make Ontario police officers on the scene of this high-profile scooter case. One of them pushes the small boy off his scooter onto the ground.

In the video, another young man on the scene — Brodie O’Hare, 19 — asks the officer, ?What the fuck are you doing, bud? He?s 12 years old.? The officer, who is holding the boy’s scooter, replies: ?Well, he?s failing to identify. If anybody else does. You guys, this behavior is unacceptable. The way you guys are acting is unacceptable.?

He turns back to the kid he pushed and says, ?You cannot talk to an adult like this.? “I didn’t say anything!” protests the boy. O’Hare, who didn’t film the video but did post it on his Instagram account, told reporters from VICE World News that the officer’s aggression was unwarranted.

?That boy didn?t cuss at him or talk back; he complied completely,? said O?Hare. ?That little boy did not deserve to be shoved basically full force to the ground. That cop stiff-armed him.?

According to O’Hare, the park was open when the officers came in and began asking kids for IDs. One of the officers told the 12-year-old scooter rider to put his mask on, and he complied — even though wearing a mask is not required by law outdoors in Ontario. The officer then demanded the boy’s ID and parents’ phone number.

?This cop just was aggravated from a few other kids that were lipping him off, not wearing masks, and I guess that?s what triggered him,? O?Hare remembered. ?He yelled at the kid for not complying to give ID, which a 12-year-old does not have.? He added that the kid was ?very scared, terrified, mortified. He felt embarrassed.”

Since the incident, the skate park and playground have been closed. OPP Commissioner Thomas Carrique issued a statement on the day after the video posted, saying that the Peel Regional Police are investigating the incident. “We understand the concerns being expressed by members of the public, and I want to assure everyone that the Ontario Provincial Police holds its members to highest levels of professionalism and accountability,” said Carrique.

The statement asserts that ?officers stopped to speak to a group of young people, none of whom were wearing masks or social distancing.” The release also maintains that the skate park had been closed under the providential Stay at Home Order. It adds that the officer involved in the altercation has been reassigned to administrative duties pending the completion of the investigation.

The altercation occurred amid public backlash against Ontario’s new rule giving cops the authority to stop suspected social distancing violators who are outside their homes. On Friday, Ontario Premier Doug Ford announced that the law enforcement officers would be able to randomly stop, demand ID, and question people — including those in cars — to make sure that their trips outside the home were essential. Outcry against the announcement was fierce. Most Canadian police forces, including in Toronto and Ottawa, said they refused to perform random stops of Ontarians.

Notably, the OPP police force initially said it would be adhering to the provincial order. However, in response to widespread criticism, Ontario lawmakers backpedaled and announced a modification to the new rules the next day. The amended new rule limits police officers to only stop people they have reasonably suspect are ?participating in an organized public event or social gathering.?

The new rules come amid Canada’s slow vaccination campaign and COVID-19 cases are soaring. Canada outpaced the United States in new daily coronavirus cases per capita, and healthcare officials caution Canadians that the worst is still to come.