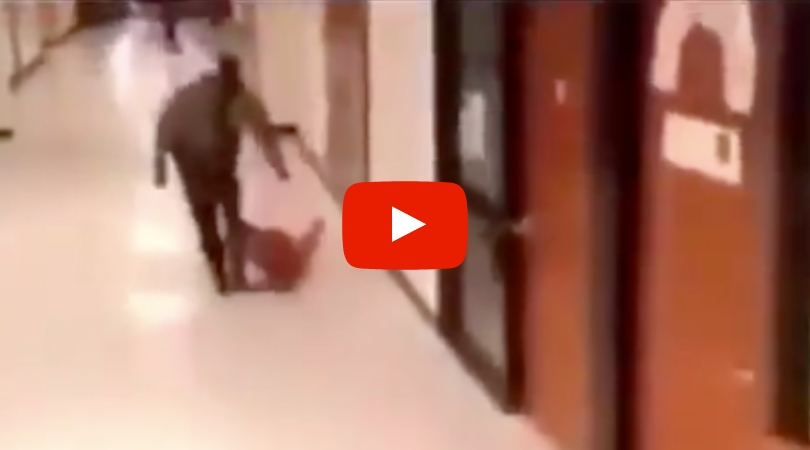 A North Carolina sheriff’s deputy has been suspended after he was caught on video violently body-slamming a Middle School student on the floor twice. The shocking incident occurred at Vance County Middle School 45 miles North of Downtown Raleigh. The school district reported the incident to District Officials on Thursday.

School surveillance video shows the Vance County Sheriff’s deputy walking down the hall with a child before he’d suddenly turns around and picks up the student and physically throws him to the ground. Just a few moments later, the deputy decides to pick up the student from the ground and slams him onto the floor again even harder.

This officer MUST be fired by the end of the day TODAY.
He should then be ARRESTED immediately for felony assault of a child.

This not only violates policy, it violates the law.

The school quickly released a statement saying, “We are aware of the incident that occurred at Vance County Middle School involving a school resource officer. We are deeply concerned by the actions that took place. School and district officials are working closely and in full cooperation with the local authorities to address this matter consistent with school board policy and state laws.”

According to Vance County Sheriff Curtis Brame, he was stunned and shocked to see the size of the child, since it reminded him of his grandson. Brame has officially brought in the North Carolina State Bureau of Investigation to conduct the probe. The deputy was reportedly placed on leave pending the investigation.

Vance County District Attorney Mike Waters stated this incident is a use-of-force case, and he has assured the family that the investigation is being conducted appropriately. Sheriff Brame said he was not aware of any previous complaints about the deputy and it wasn’t clear what the child might have done or said leading up to the body slams.

There is outrage following very disturbing video out of a North Carolina middle school. A school resource officer is caught slamming a student to the ground twice. He then yanks the student up before dragging him down the hallway.#WhatToWatch @VladDuthiersCBS pic.twitter.com/unpOhvACGF

The child is under 12, and has a bump on his head from the incident but was not hospitalized. By the looks of it, this boy must have suffered emotional trauma because the amount of force this Deputy used is unnecessary. This child literally flew up in the air and was thrown to the ground as if he was part of WrestleMania. I don’t care what this child did, but this child does not deserve to be treated with such excessive force, especially at his size.

This deputy should be fired and arrested for felony assault of a child, not put on administrative leave. This is child abuse, do your thing social media.