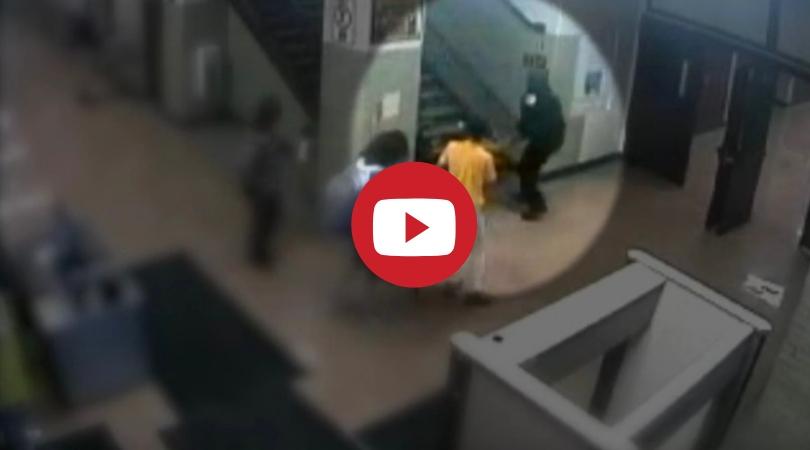 Chicago officers are now under fire after surveillance video shows police dragging down a 16-year-old student down a flight of stairs. The two officers were caught on video beating and tasing her, later defending themselves by stating the teenager had instigated the violence.

According to authorities, the incident began when Dnigma Howard was escorted out of Marshall Metropolitan High School. Two school resource officers assigned to the campus later reported “confrontation” between the assistant principal and Howard. The two policemen then stated that as they were leading her out of the building, she attacked them, causing all three of them to fall down the stairs.

Authorities were later shocked after surveillance video obtained by the Chicago-Sun-Times showed a different story. Howard is seen standing next to one of the officers and slowly turns towards him. The other officer then appears to grab her out of nowhere and throws the student downstairs. The footage from the bottom of the staircase then shows the two officers physically pulling Howard down the stairs by her arms. The officers then hold her down, step on her chest, punch her, and use a stun gun.

What makes the situation even more tragic, was the fact that Dnigma’s father stood nearby, but was told not to intervene. Howard was arrested and charged with two felony accounts of aggravated battery against the officers. This after both stated she “became irate and initiated a physical altercation” with both men.

After a full investigation, all charges against the teenager were dropped in “the interest of justice”, but the Howard family have filed a federal lawsuit against the city, the two officers involved, Johnnie Pierre and Sherry Tripp, and the Chicago Public School. Both officers are no longer working at the school, and one is out due to “injury on duty”.

According to Howard’s attorney, Andrew M. Storth, the 16-year-old did admit that she was resisting officers at first, but only acted in her defense, as she was responding to their actions. But, he believes the fact that the teen was unarmed and treated with such violence by the officers shows a clear failure of the school and it’s departmental leadership. A spokesperson for Chicago Public Schools responded with a statement saying they are deeply disturbed by the incident, which “has no place in their schools.” The CPS Office of the Inspector General is currently conducting a full investigation.