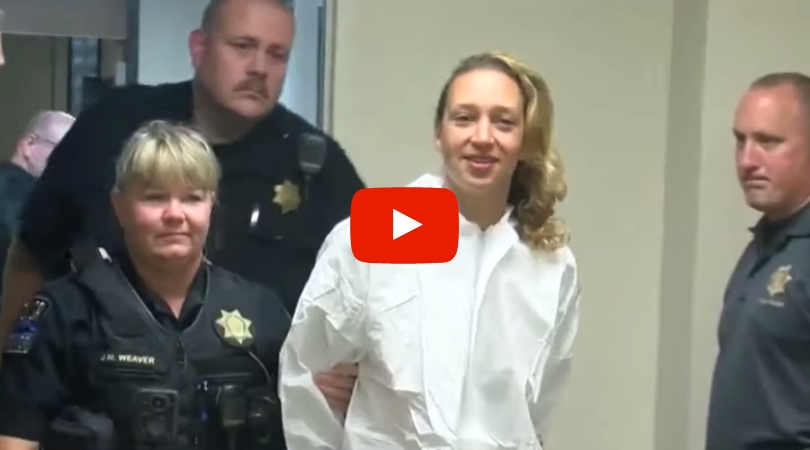 An Oklahoma mother who was accused of stabbing her 11-year-old daughter 50 to 70 times with three different weapons will spend the rest of her days behind bars. According to authorities, the stab wounds were too many too count, which is why medical experts could not accurately give a total number, initially estimating around 100 marks. The mother also hit her the girl in the head with an ax and set their home on fire to cover her tracks.

Earlier this week, A Tulsa County judge sentenced 40-year-old Taheerah Ahmad, who had pleaded guilty last month to two counts of child neglect and one count each of first-degree arson and assault battery, to life in prison. Her daughter, who I believe had a guardian angel attached to her back, was in critical condition after the attack but has now recovered from her injuries.

Ahmad was arrested by Tulsa police in May 2018, after authorities said she attacked the girl and gagged and bounded her two younger daughters. Luckily the other two daughters were found unharmed.

During her initial court appearance, Ahmad confessed to Tulsa police department that she held her the three children hostage for a week and duct taped the older two while stabbing her oldest daughter whom she believed was the devil. She claimed self-defense because the child fought back while being stabbed. The arrest report stated Ahmed told investigators she was upset with her children “because of the way they were reading a book and looking at her.”

After leaving her daughter in the burning home, she left with her youngest, since her 9-year-old had managed to escape with the help from her sister. Ahmad was later found in her car in downtown Tulsa after authorities released the mother’s picture and an amber alert, and was quickly spotted by witnesses.

Ahmad will have to serve 85 percent of her time in prison before ever being able to be eligible for parole. The reason behind the sentence was because the judge and Assistant District Attorney believed this was the worst case they had ever seen, due to the gruesome nature of the crimes. Ahmad will serve three life sentences concurrently with an additional 10 years for arson.