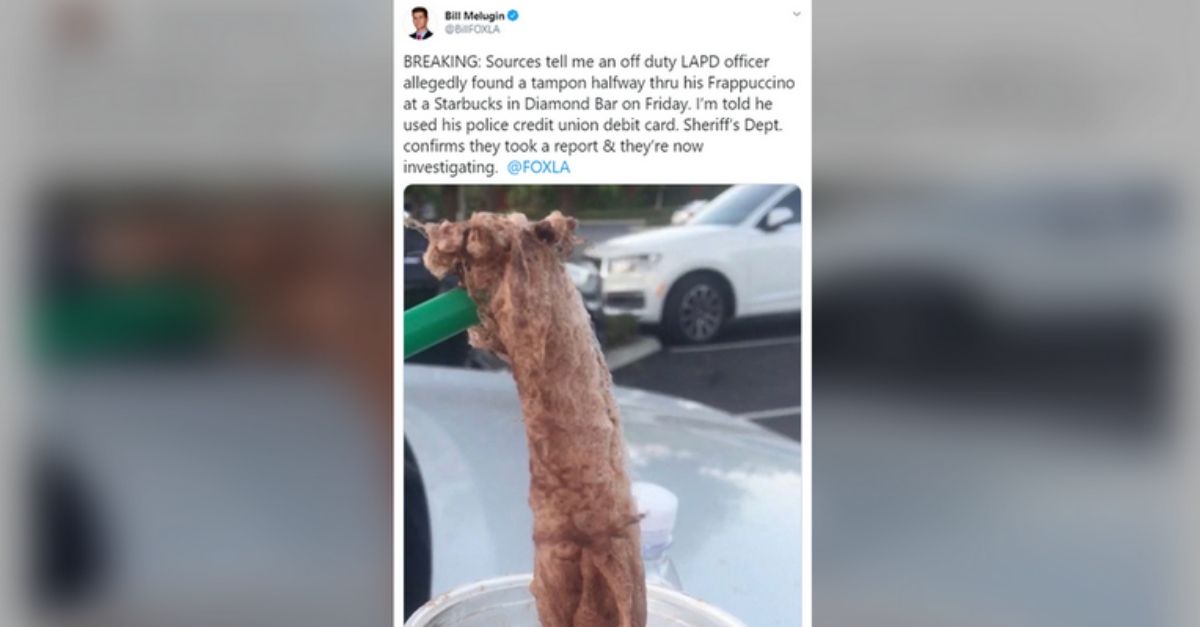 Eeeeek! I have certainly lost my appetite after reading this horrible story. According to the Los Angeles County Sheriff’s Department, an off-duty LAPD officer allegedly found a tampon halfway through drinking his frappuccino which he bought at a Starbucks store inside of a Target in Diamond Bar.

LASD is currently investigating the incident and has collected all surveillance video from Starbucks. The officer shared a stomach-wrenching photo on Twitter, showing the coffee drenched tampon in question, which was grabbed using Starbucks’ iconic green straw. The LAPD police union stated the alleged incident was a ?disgusting assault? on a police officer and those responsible should be ?publicly exposed, fired, arrested, and prosecuted for their cowardly and repugnant actions.? An investigation was quickly laughed at after the incident.

As far as how the employees learned the man was indeed a police officer, he had allegedly used his Police Credit Union debit card to buy the drink. According to the LA Police Protective League, the “assault on a police officer was carried out by someone with hatred in their heart and who lacks human decency.”

The incident comes as there have been mounting tension between protesters and police offers following the killing of George Floyd. Floyd was killed on May 25th, after officer Derek Chavin pressed his knee on his neck for 8 minutes. The incident sparked several mass protests around the world over the question of racial inequality and police brutality. This isn’t the first incident involving police officers and a threat to their lives during these last few months. In New York, three police officers recently claimed they were hospitalized after they drank milkshakes spiked with what officers believed to be bleach at Shake Shack. The DEA then stated the officers were “intentionally poisoned” in a statement following the incident.

“Tonight, three of our brothers in blue were intentionally poisoned by one or more workers. Police in New York City and across the country are under attack by vicious criminals who dislike us simply because of the uniform we wear. Emboldened by pandering elected officials, these cowards will go to great lengths to harm any members of law enforcement.”

Despite the DEA releasing the statement, the case was later dropped, and no foul play was found after a New York Detective investigated the incident. NYPD Chief of Detectives Rodney Harrison Stated that after a thorough investigation by the NYPD’s Manhattan South investigators, it was officially determined that there was actually no criminality by Shake Shack’s employees.

Two South Carolina National Guardsmen were also allegedly victims after they found several shards of glass in the pizza they ordered while staying in Washington DC. The soldiers found broken glass in the dough and cheese that was mixed in with the pizza, according to the defense department report. The soldiers did not eat the pizza and were not injured. They were advised to file a police report of the incident, but the D.C Metro Police Department stated no report was filed at the time. Capt. Jessica Donnely, A spokeswoman for S.C. The National Guard stated both soldiers were okay, and this is the only incident to their knowledge.