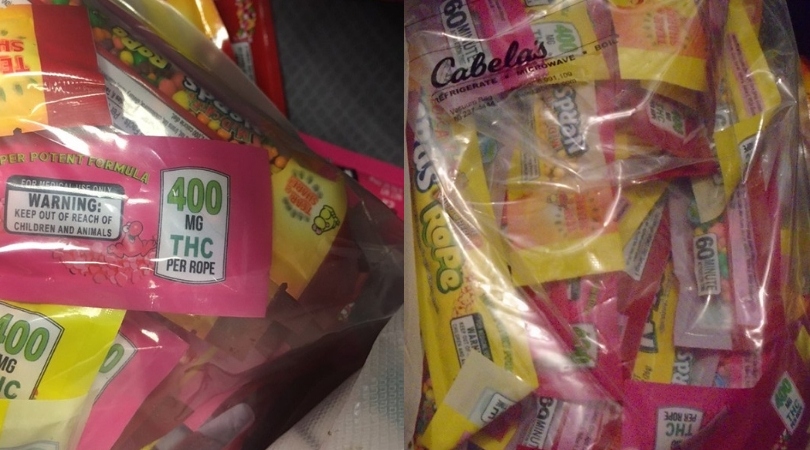 Alright, parents, it’s that time of year again. Time to search your children’s candy for drugs, needles, and everything that could possibly be dangerous to them. Okay, maybe I’m exaggerating a little bit, but the Johnstown Police Department had to issue a warning on their Facebook page last year after authorities discovered “Nerds Rope Edibles” containing 400mg of THC. So, if that doesn’t give you a motive enough, I don’t know what will.

During spooky season, Pennsylvania police urged parents to be on the lookout for all candy that they think might be contaminated. Authorities had reportedly seized 60 pounds of marijuana from the same area during a search warrant. Medical marijuana is legal in Pennsylvania for those who suffer from certain medical conditions, however, it is not legal for recreational use. The Johnstown Police Department wants parents to be as vigilant as ever and check their children’s candy before allowing them to consume the tasty treats.

Usually, the drug-laced edibles are packaged like regular candy and may be hard to distinguish from the real candy itself. Authorities included photos of the edibles that look exactly like the nerd ropes with warning labels dubbing the items “for medical use only.” The label also urges anyone who made the product to keep out of the reach of animals and children.

In response to the findings, the candy manufacturer that produces nerds, Ferrara Candy Company, did issue a statement saying it is working with the relevant authorities but the product is no way associated with the company itself. It did reassure consumers that their products, including nerds rope candy across the country, are safe for them to consume.

Of course, it’s not the first time that the authorities issue warnings about Halloween candy that contain potential hazards. Back in 2018 police in Massachusetts advised residents to throw away their Twizzlers after two packages were found to contain needles.

Who is giving away their expensive edibles to kids? Answer: NO ONE. This is crime control theater and all it does is hurt actual addicts who need help and support.

In 2017 Menominee Tribal Police stated that parents on the reservation in northeastern Wisconsin found several packages of methamphetamine among children’s trick-or-treat Halloween candy. The Food and Drug Administration issued a list of Halloween food safety that warns parents not to let their children snack on their treats from their goodie bags while trick-or-treating, instead wait until an adult can inspect the candy first. Signs of tampered candy can include any unusual appearances such as discoloration, torn wrappers, or tiny pinholes.

Now, if this is true or not, it’s pretty sad that children are the ones being attacked since they are only trying to enjoy the holiday. But, I will say one thing. Edibles are pretty expensive, and it kind of seems a little bit ridiculous that they would be throwing their drugs away on something like this. Are drug dealers really putting a $15 nerd rope in a child’s basket? I don’t know. You can decide that one. But for now, I think it’s better to pay extra attention to what your child is eating. Better safe than sorry.

Editor’s note: This article was originally published on October 14, 2019.

Watch: Florida Man Caught With Cocaine on Nose, Tells Deputies ‘It’s Not His’