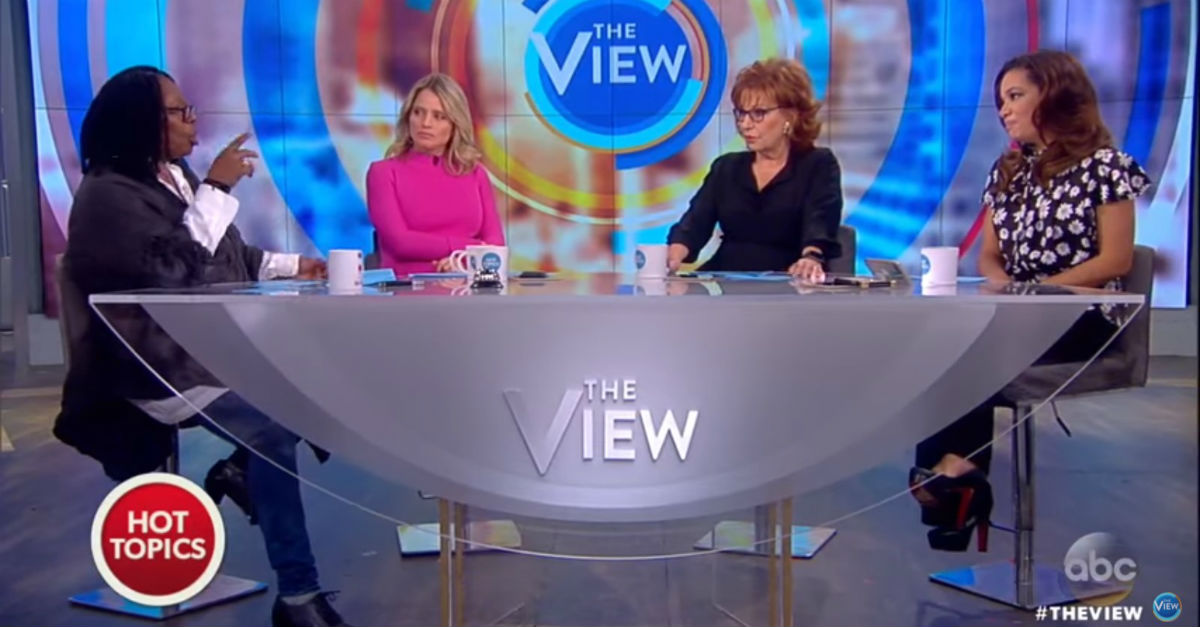 The co-hosts of ABC’s “The View” expressed their frustration with some of the religious defenses of Alabama senatorial candidate Roy Moore.

Moore was recently accused of sexual misconduct by several women. One accuser said Moore touched her over her underwear and tried to force her to touch his genitals when she was 14 and he was 32. Many of the other accusers were “between the ages of 16 and 18, and [Moore] was in his early 30s.”

Several of Moore’s supporters have faced a great deal of criticism for their defenses, including the popular Pastor Mark Burns. Burns suggested to MSNBC’s Joy Reid that morality was not “the only quality that makes a good leader.” Reid pushed back, asking how a spiritual leader could say “morality is not the only important thing.”

“The View” co-host Sunny Hostin said that she didn’t understand how anyone could put their “party before morality.”

Whoopi Goldberg accused evangelicals of pushing their own version of morality on others while Joy Behar accused many of the same people of not believing child molestation was immoral.

RELATED: Roy Moore’s first accuser didn’t back down in her first TV interview since her allegations went public

“That bothers me more than someone that never claimed to be good at all,” added Sara Haines, who criticized Moore for presenting his political positions as moral.

“We are not talking about every evangelical,” Goldberg clarified. “There are a lot of folks who are willing to have this conversation and who are very upset with what Roy Moore has done.”

Hostin agreed, saying that it was not fair to group “all people of faith in that way.”

Many evangelicals were quick to condemn one of the most striking defenses of Moore, which came from Alabama State Auditor Jim Ziegler. Ziegler compared Moore’s alleged actions to a biblical relationship while speaking with the Washington Examiner.

“Also take Joseph and Mary. Mary was a teenager and Joseph was an adult carpenter. They became parents of Jesus,” he argued.

Critics reminded Ziegler that the Bible did not specify Mary’s age. Several in the evangelical community also made it clear that “Christians don’t use Joseph and Mary to explain child molesting accusations.”

It would appear that “The View” co-hosts aren’t the only ones taking issue with some of the excuses used to defend Moore.

Last week, Fox News’ Tucker Carlson dismissed Moore’s assertion that “forces of evil” were in a conspiracy to “silence and shut up Christian conservatives” like himself.

The forces of evil will lie, cheat, steal –– even inflict physical harm –– if they believe it will silence and shut up Christian conservatives like you and me. (2/4) #ALSen

“He’s claiming to be a victim of bigotry. That’s what demagogues do when they’re cornered,” Carlson said.

“What he’s not allowed to do is drag God into this,” he added, saying that God was not being accused of “trolling for teenagers in shopping malls.” Carlson was referencing a report in the New Yorker from locals that claimed Moore was banned from a local mall “because he repeatedly badgered teen-age girls.”

“This is not about Christianity, this is about Roy Moore. And it discredits Christianity when Christians allow Moore to use his faith as a shield. It’s offensive to real believers.”