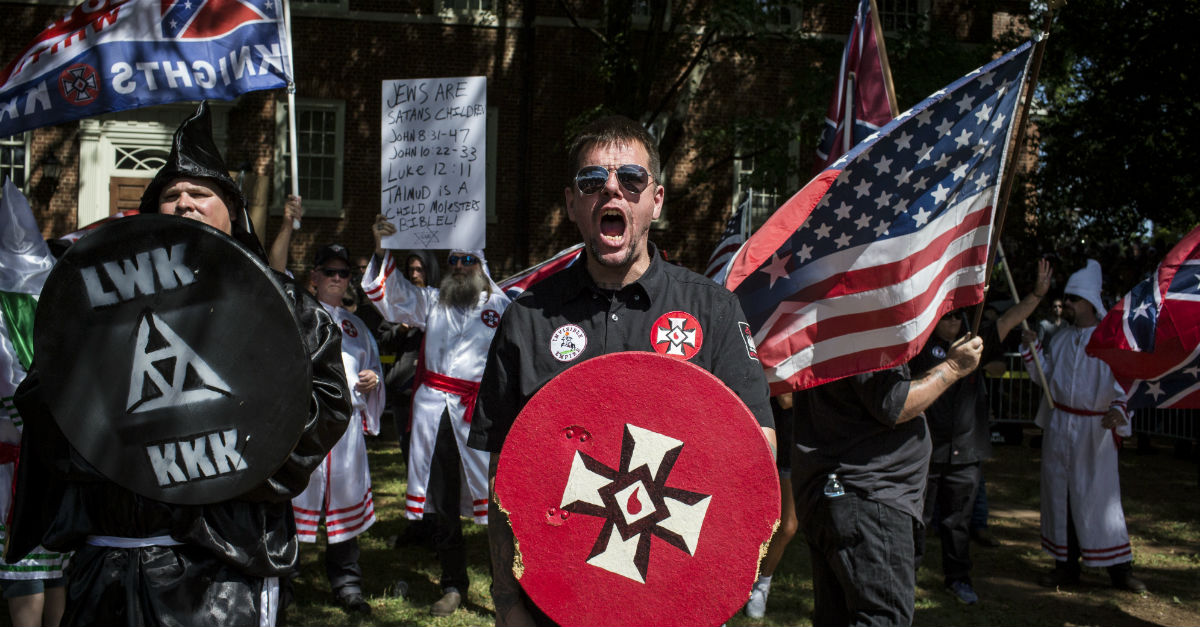 When James Alex Fields Jr., a 20-year-old from Ohio, was identified as the man accused of intentionally ramming his car into a crowd of anti-racist demonstrators in Charlottesville, Va., on Saturday, his bewildered mother spoke with the press.

After learning what her son was accused of doing, Samantha Bloom seemed confused. She doesn’t really talk about politics with Fields, she said. She’s just watching his cat.

He’d mentioned a label for his beliefs ? “albright,” she thought. “It’s alt-right,” an Associated Press reporter explained, adding that the term is short for “alternative right,” and its adherents are an unsavory collection of racists.

RELATED: The white supremacists in Charlottesville were trying to co-opt the right ? we should make it clear that they?re not welcome

“I just knew he was going to a rally,” Bloom protested, adding, plaintively, “He had an African-American friend  … I mean … so …”

Her voice trailed off, but her implication was clear: James Alex Fields Jr. had a black friend, so how could he be a racist? How could he be a white supremacist? How could he travel across country to march for white nationalism with the KKK while chanting Nazi slogans? How could he now stand accused of using his car to murder a young woman speaking out for equality and human dignity? “He had an African-American friend  … I mean … so …”

I’m sympathetic to Bloom here, as I would be to any mother blindsided by her child’s apparent turn to domestic terror and indefensible hate.

But I’m also struck by her use of the thoroughly debunked “I can’t be racist; I have black friends” defense against charges of racism. (Of course racists can have black friends, just as sexists can love their wives or daughters. Holding gross prejudice against a large group of people doesn’t preclude personal affection for individuals in that group, who are often presumed to be the exception to the imagined rule.)

Bloom’s comment is the simplistic version of a broader assumption among too many white Americans: we default to thinking of racism in dramatic, exclusive terms, so anyone who isn’t wearing a white sheet and intentionally engaging in racial malice can’t be racist. And because most people in this country are not actively, willfully racist in that identifiable manner, that default makes real, ongoing, and systemic problems of racism all to easy to dismiss and tune out by those of us who are not the victims.

Black and other minority Americans don’t think about racism in such narrow terms, and so they were not surprised by the white nationalist violence we saw in Charlottesville this weekend. They know all too well Emmett Till’s murder is very recent history. They know racism, both individual and institutional, has not gone away.

As Rare’s Zuri Davis has written, “being black in America is exhausting,” especially when white people can’t or won’t see why. “At what point,” she asks, “will [African Americans] be able to voice our concerns without them being ignored by those who have never had to live like this?”

One of Fields’ fellow white nationalists in Charlottesville was a Peter Tefft from Fargo, N.D. When Tefft was publicly identified in images from the rally, his family also spoke to the press. Their response was different.

“I, along with all of his siblings and his entire family, wish to loudly repudiate my son?s vile, hateful and racist rhetoric and actions,” wrote Tefft’s father, Pearce, in an open letter at a local news outlet.

RELATED: The unrest in Charlottesville will hurt America only to the degree that we let it

“We have been silent [about Peter Tefft’s racism] up until now, but now we see that this was a mistake,” he continued. “It was the silence of good people that allowed the Nazis to flourish the first time around, and it is the silence of good people that is allowing them to flourish now.” The letter ends with a plea to Peter to repent of his white supremacy, telling him he will only be welcome among his family after he has abandoned his “twisted worldview.”

The Tefft family’s active anti-racism ? their willingness to recognize and reject racism it would be very comfortable for them to ignore or downplay ? is big part of the change the violence in Charlottesville ought to galvanize. Repudiating obvious hate like the KKK is good, but it’s also the barest minimum of moral decency.

What Charlottesville has reiterated is what black Americans have had to repeat for far too long: that racial prejudice and injustice in America is insidious, and when the mundane is left unchecked, it will come to a violent head.