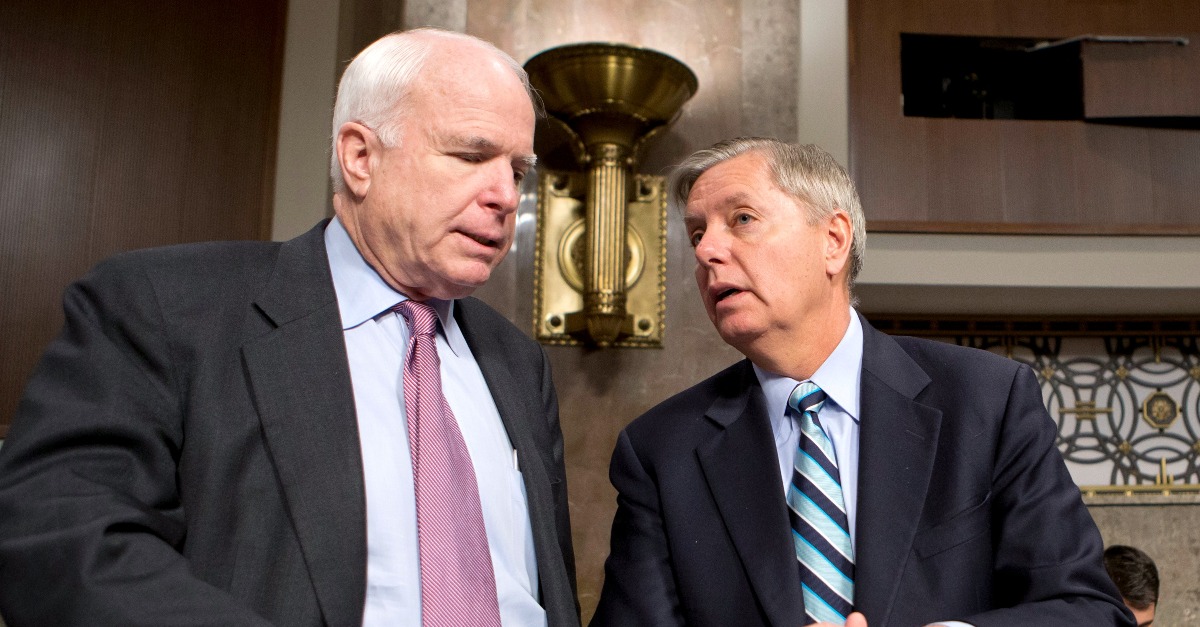 One of the first pieces I ever wrote for Rare tallied up all the wars John McCain and Lindsey Graham have supported over the years — eight by my count, including in places as peripheral to American interests as Nigeria. The pair have rarely encountered an airstrike they didn’t like. Yet today McCain is once again being hailed as a “moderate” for his pivotal role in killing two Republican health care bills. He’s a cipher of common sense, drones This Town, among the last of the sanctified George Romney-style “moderate Republicans” whose coming extinction is a loss on par with that of the dinosaurs.

It’s a funny thing, really. Is McCain’s pigheaded advocacy for more Iraq-style foreign interventions really “moderate?” What about his accusation that a senator who questioned the military-industrial complex was “working for Vladimir Putin?” What about his remark just before he killed so-called Obamacare skinny repeal: “Let’s get this over with. I really want to do NDAA”? Is punting on the nation’s broken health care system in favor of engorging the Defense Department with more waste an act of moderation?

I don’t mean to pick on McCain, who’s currently staring down long odds in a battle against brain cancer — with that I wish him all the best. But it’s simply a fact that what political elites tout as “moderate” is nothing of the sort. In modern usage, “moderate” typically translates to “believes what most others in Washington believe”: military meddling abroad, government intervention in the economy at home, a blithe attitude towards the national debt, faith in the progress of the technocratic state, mass immigration, free trade. Far from being pragmatic, these tenets themselves amount to a creed, one the so-called moderates cling to with all the zeal of ayatollahs. Challenge them, really challenge them, as the Freedom Caucus and Donald Trump sometimes do, and it can feel like you’re on the receiving end of a fatwa.

We’ve made a mistake by ceding that venerable M-word. Political moderation isn’t McCain’s brand of radicalism; it isn’t a philosophy at all, more of a temperament. It means approaching politics with a desire to know. It means sharpening your beliefs against opposing viewpoints and changing them when they’re found wanting. It allows some space between your bedrock principles and the real world where compromise is sometimes necessary. It drives you to seek out others and understand why their perspectives are different from your own. It permits you to believe, as I do, that government ought to be drastically shrunk, its budget sheared, its entitlements heavily reformed — but also acknowledge that yanking Medicaid coverage away from former miners in West Virginia might not be the sharpest idea. It also means admitting that not everything needs to be politicized; indeed, most things do not.

“Moderation is a fatal thing,” quips the raffish Lord Illingsworth in Oscar Wilde’s play “A Woman of No Importance.” “Nothing succeeds like excess.” Certainly the last decade has reinforced Illingsworth’s epigram, as blabbermouths like Tomi Lahren and Keith Olbermann discovered the ticket to success was more outrage, more volume, more ideological catharsis. That grounding sense of the absurd shared by old-line thinkers like William F. Buckley is gone. Modern pundits announce with perfectly straight faces that we need to destroy the NFL because some of its athletes adopted the wrong posture during the National Anthem or that Donald Trump is a Manchurian candidate deployed by the Russians to sap America’s national strength. The goal here isn’t just reinforcing prejudices but hardening them into pure steel, occluding all information that might contradict them.

For the past three years, I’ve had the privilege of helping edit a news outlet, Rare, that rejects purity in favor of free-thinking moderation. That experience, combined with the rise of Donald Trump, hasn’t so much changed my core beliefs as matured the way that I think, a development I see reflected in the astounding insights of my readers.

This is regrettably the last piece I’ll write as deputy editor at Rare Politics. I’m off to The American Conservative, though I hope to still contribute to Rare from time to time. Perhaps I can return as a dotty Andy Rooney-style emeritus commentator — I’ll rant about the perils of Christmas shopping and the joys of geraniums. Whatever the topic, I hope we can keep these conversations going, even when — especially when — they lead to disagreements.

It’s a moderate goal but one worth pursuing, I think.